Texarkana on the Gay-Bating Side 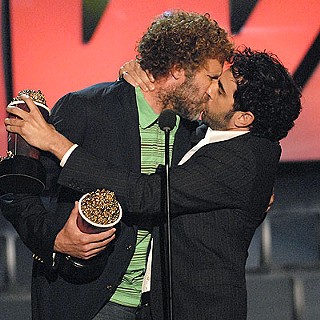 Dollar beers and portable chairs were reportedly flying after two cage fighters in the Blue Collar Brawlin' match at the Four States Fair Grounds in Texarkana began tearing each other's clothes off and kissing.

Apparently, the show was all a part of Sacha Baron Cohen's latest schtick in preparation of his latest film (which, if this prank is any indication, seems to be not too different from the jist of his last).

Gee, a crowd felt duped? Then they got angry and reacted? I guess luring a tiger into a cage with fake meat and then poking him with a sharp stick might seem pretty funny... for like the second before he rips your head off.