Didn't Anyone Else Notice This?

Barack in Kimmelland: Sway away from the gays... 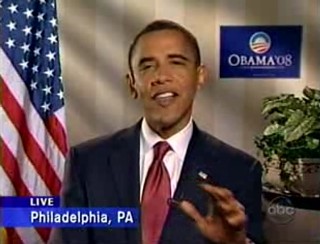 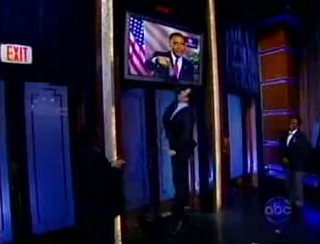 Ummmm, just stick with basketball, Sen. Leave the funny stuff to the pros.

So, I'll admit – I drank the Obama Kool-Aid. I bought the "Obama for Your Mama" shirt and wore it to band practice and declared "Divided we stand!" to my Clintonian gaywad band mates, whose primary line of defense was "Obama hates gays, Dacia."

"That is the most absurd thing I have ever heard! He stands for the complete repeal of the Defense of Marriage Act and Don't Ask Don't Tell," I attested, "Which Hillary probably came up with when her husband was running the show!"

I ended up with about 15 Hillary for President campaign signs on my doorstep the next morning.

This petty taunting, however, could not sway me from the truth: Obama=Change.

So, la-dee-da, there was my boy on Jimmy Kimmel Live on Father's Day, relaxed, down-to-earth, and bursting of witty banter. A little poking about Obama's now infamous bowling handicap, some talk of pouring cement over the White House bowling alley to make room for the half-court on which Obama will one day be challenging world leaders to games of H-O-R-S-E.

Then Jimmy asked Sen. Obama if he and his "Body Guy," Reggie, showered together or separately after basketball pick-up games on the campaign trail (4:27 of the youtube clip). Sen. Obama declined to answer with a sly little grin on his face. The audience chuckled. Hmmm… a little mystery for all those thirsty queer democrats???, I wondered to myself.

Then a few minutes later (at the 6:58 mark) Kimmel offered himself to Obama as a potential running mate, to which Obama responded: "That whole thing with Affleck… That's not gonna work."

Now I am not easily offended. I am probably one of the most unPC Mexican lesbians this side of the Rio Grande. But Obama's comment raised the hairs on the back of my neck. Like, what? You can't work with homos or what? I know we are all entitled for a little leeway to josh… that these are just jokes, ma! But Obama has shown somewhat of an ambivalence towards the LGBTQ community in the past. Can he really afford this type of locker room bullshit just when he's trying to convince us that he wants to bring us all together?

Did we get it all wrong?

Were we simply pandered to?

Can I have some more purple juice, please? 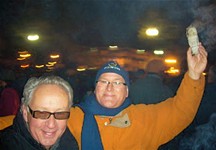 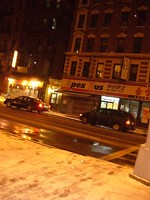 Day One. Road to the Whitehouse: Save Us, Davis!
Gay Place correspondent Dacia Saenz finally has a moment to breathe and blog about her inaugural inauguration experiences.