When Not Asking and Not Telling Isn't Enough

Lesbian wins what may turn out to be a first "Timber!" in the Don't Ask Don't Tell tree. 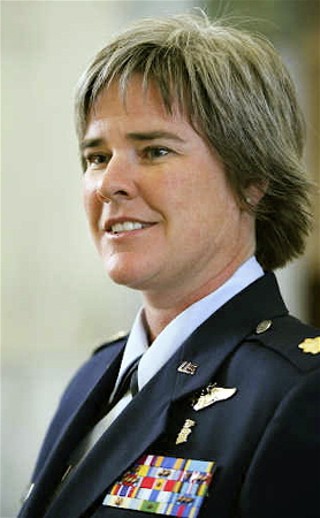 She wasn't asked and she never told.

According to the Air Force Times, "Maj. Margaret Witt was literally a poster girl on the service's promotional materials." So, of course they discharged her in 2006, one year within her 20-year-retire-with-benefits anniversary, after an anonymous tip-off hepped them to the fact that she was a lesbian.

Witt has been fighting the decision ever since, and yesterday, the nurse reservist assigned to the 446th Aeromedical Evacuation Squadron at Washington state's McChord Air Force Base was given a win – "but a procedural win," according to SLDN's Victor Maldonado – by the 9th U.S. Circuit Court of Appeals in San Francisco.

So let's get this "straight": Even if you never told what they didn't want to hear and told you not to tell, you can still be told on by some tell-tale tattletale and told to take a hike… or in this case, a DISSSSSS-MISSED!? Talk about your "liberal interpretation"s.

Love During Wartime
You! I want to bomb you with the Gay Bomb. Let's start a war!

Meditations
A meander through the holidays and DADT

Where the Reparations At?
There's more to repairing than repealing