Tab is coming to Austin!

Well, the soda's OK, but we mean Tab Hunter, who will be here in Austin on Sunday, June 3, 7pm at the Alamo Drafthouse to host a clip show of his movies and a full viewing of Polyester, his comeback in which he starred with Divine. Oh, Tab, we're glad.

Word on the street: Tickets selling fast, but still available (click the Drafthouse link above to purchase). What better way to Pride it up than with Hollywood's hunkiest "Sigh Guy"?

Here's a review of his tell-almost-all bio from last year.

1943: As Hollywood sputtered its last wheeze of the studio system, desperately hacking up hunks of young actors to run through the movie-star mill, a strapping young Arthur Gelien was discovered at the tender age of 12, shoveling horse dung. The tousle-haired son of a Teutonic immigrant single mother had no idea where that shovelful of manure would take him – no idea that it would eventually spade him across the glossy covers of so many tattletale tabloids. Better known as Tab Hunter, Gelien (also dubbed Fifties "Sigh Guy" and "Squeal Appeal Fella") tells almost all in this autobiography co-authored by Eddie Muller, the "Czar of Noir" and adults-only film curator.

The "almost" is important to note, as Hunter relates life as a closeted Hollywood homo while delivering dish on colorful personalities like bitchy diva Tallulah Bankhead, flirtatious Lana Turner, and the real dirt on the Duke. He was an actor besieged by controversy: He survived a potentially career-killing outing (at a gay party raid) only to be devastated by a fabricated smear campaign (in which he allegedly beat his dog). Yet in this autobiography, he manages a gracious take on the glamorous life. He issues a dignified drubbing to the Hollywood that took him to the matinee mountaintop, then kicked him in the nuts.

Hunter reserves his most scathing rapier for those most deserving, like weaselly manager Henry Willson, whose eyes he describes as "a pair of piss holes in the snow." His story is also tender, as he open-heartedly takes on the father he never knew, the stern but devoted mother who gave him "protection more than affection," and his awkward struggles and close friendships with studio-imposed beards like teen idols Tuesday Weld, Natalie Wood, and Debbie Reynolds. He lets us see him "swimming in the Hollywood fishbowl" alongside lover Tony Perkins; a career resurrection thanks to John Waters' Polyester and his favorite co-star, Divine; and his current life with producer "Baby Mogul" Allan Glaser.

Ultimately, Tab Hunter Confidential is itself a wink, a nod, and a middle-finger salute to the celebrity scandal rags of his heyday. Hunter reveals how Hollywood handles black sheep in a sooty stable. Tab's true tale of celebrity survival self-references all in third person, acknowledging "Tab" as construct, while commenting on the preposterous path of pre-fab superstars. For a man whose public life was prescribed to him, and whose treasured private life was relentlessly exposed, Hunter gets the last word in releasing his memoirs: "Better to get it from the horse's mouth, I decided, and not from some horse's ass." 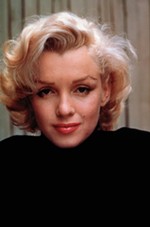 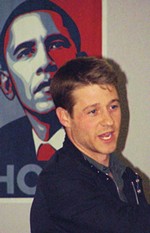 Driving Down the 101: Somehow Ending Up in Austin
Hunky Ben McKenzie spoke to a throng of screaming babes at the UT Obama office.