Getty at the Homo Revolution Tour 2007.

Is the world ready for homo-hip-hop or the HomoRevolution as it was called last rainy Saturday night? The crowd was small, intimate, lined nervously in hotel ballroom chairs, unsure what they were about to endure.

The performers (some from close by, others from as far away as the UK) were hitting their 10th day on tour, and you could tell. Rode hard, put away homo; about 12 queer rappers vanning it through the Southwest on this country's first ever homo-rap tour. Hey, Papi, are we there yet?

"Well, the crowds have been small," stated smiley merch guy ticket-taker man. "The response has been great, though. Those that come out are here because they want to be here. But it's small, still. Fifty to 100 people per show; it's not huge, but it's our first year."

He was jovial and accessible; something that set this lineup wa-a-aay off from so many of the other backpacking, ego-maniac underground hip-hop acts. (So friendly, Feloni hit on my girlfriend, fer chrissakes.) These kids were down to Earth, though, some more talented than others, with genuine spirits – just putting themselves out there, reaching out to their community. Their family.

Next year, Austin should pony up a more, shall we say, umm, "crunk" location. This year's hotel ballroom was a noble, albeit last-minute declaration of "the more the merrier" by ALLGO and Austin Relay Pride, which took the tour in as Saturday night's main Pride party. I mean, ARP looked like summer camp for urban cats, and it all but took over that whole damn hotel with this pure jet-setting attitude that had the concierge shaking a bit. Superman in the audience called it the "Better pride. See, we don't let everybody know about this one; that's how we keep it hot. So, shhhh."

But, that was the problem. Too small. It's hard to break through those initial hip-hop jitters, even at a full concert, let alone an awkward conference room. Next year, IMHO, they should sell beer, too. There was no lubricated liquid rhythm this year. Just a small stage with random acts that really had to prove themselves, which made it one helluva tough crowd to play.

But play they did. From FOXXJazell's booty-shaking loss of the right lyrics to spit to a cuddly bear from Austin gracing a stage for his very first time (and not doing half bad, I might add) see, this lineup just needed time to loosen up.

JFP (Julie Fucking Potter) spouted San Francisco values until you could see the veins in her neck, red-faced passion with each refrain an instrumental in which she said nothing, stood on-stage, head down, eyes closed, with fist clenched in the air. She believed. We all started to believe.

Bigg Nugg came out; Deadlee hit the stage. UK's Q-Boy wouldn't stop dancing; Feloni lit it up; and Miss Money sang soul covers that made the gray-haired woman in front of me raise her purple cane in reverie. [Editor's note: Dude, I am almost sure you speak of Ms. Ana Sisnett.] Here, here. Johnny Dangerous got dirty (duh), Mz Fontaine got down, and kids were off to the side of the stage … dancing! Out of their seats, actually moving. And it felt like something. Something big, maybe. Something important. Something growing inside of us.

Something like a revolution, maybe? We'll see next year. 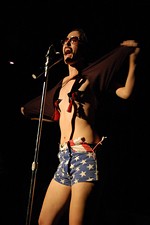 Gender:Queered
The personal is about to get political Christeene Lyon Wants You to "Fix My Dick"
Austin Pop Star has a new video, and it's on YouTube.