Tracking the Polling Numbers
If you're as fascinated by polling and maps as I am, these are my two favorite sites for trying to predict how the battle for Congress is shaping up: For the Senate, I like Electoral-Vote.com, which posts the results of the most recent poll in each race and plugs in the new numbers daily into an easy-to-read U.S. map, and differentiates between states that are "strong," "weak," or "barely" for the leading candidate. On the House side, another great way to waste time at work is to study Majority Watch, a project of the Constituent Dynamics polling firm. They are polling 54 congressional districts that appear to be in play, and like Electoral-Vote.com, they keep a running tally of which party appears to be headed toward that 218-seat majority. Majority Watch has very nice pop-up graphics that give instant info on the seats they are tracking. Have fun surfing; try not to let your boss catch you.

Congressional District 21 Candidates Forum
Candidates for Congressional District 21 will answer questions from a panel of news reporters (including yours truly) on Wednesday, Oct. 25, 7-8:30pm, at the LCRA Board Room in the Hancock Building, 3700 Lake Austin Blvd. Because it is a special election open to anyone, necessitated by a Supreme court decision, Dist. 21 is a crowded field of seven candidates, five of whom will be at the forum: independents Tommy Calvert, James Lyle Peterson, and Mark J. Rossano, Democrat John Courage, and Libertarian James Arthur Strom. You'll notice a very important name missing from that list: the Dist. 21 incumbent, Republican Lamar Smith.

Early Voting Is Off and Running
Day one of early voting in Travis County was quite impressive. A total of 5,009 people went to the polls Monday, a very solid turnout. Combined with the 2,471 mail-in ballots received, that makes 7,480 total, or 1.37% of Travis' registered voters. Multiply that number over the 12 total days of early voting, and then use the conventional wisdom that Election Day turnout is usually about double that of early voting, and Travis could hit 50% turnout, an excellent showing for a nonpresidential election year. Of course, these first-day totals are probably inflated a bit by those mail-ins, which constituted more than a quarter of the total mail-in ballots sent out by the county. Highest turnout was at the University of Texas (in the lobby of the Undergraduate Library), with 484 voters. Lowest was at the Northeast Health Center, with 56. If you want to cast your ballot now, head to the nearest early voting location.

Bye-Bye, Republicans?
In this section of our new Election Blog, we'll be watching to see whether the pundits' and pollsters' predictions of the GOP being swept from congressional power come true.

Look Here for Important Statewide Results
For important Texas Congressional and statehouse races outside of the Austin area, keep checking here. We'll keep an eye on everything from Tom DeLay's old Congressional District 22 to the four-way (oops, sorry, five-way) mud bath in the goobernatorial race.

Welcome to 'The Austin Chronicle' Election Blog
Keep hitting your "refresh" button between now and on through November 7. We'll be updating frequently with our latest dispatches from the campaign trail. On Election Night we'll be posting live coverage with the latest returns. Rather than bouncing all over the Net looking for various race results, just stay here and let us do the surfing for you. We'll be your one-stop shop for races that affect Austinites. The blog will be divided into three sections; in this area we'll keep tabs on the city of Austin bonds, county races, and local statehouse and congressional seats. 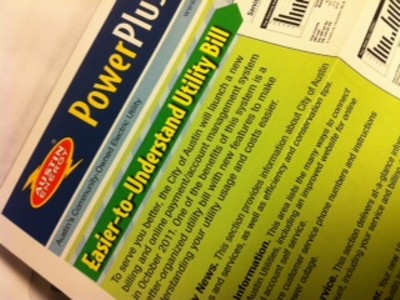 AE Rate Gate
It wasn't all that long ago when Austin Energy was the city's shining star, a national leader in producing clean, efficient energy with cutting-edge technology. Just an all-around good-guy city utility that zipped along for 17 years without a rate increase. What went wrong?