Van Boven vs. the Texas Medical Board: Now At the State's Highest Court 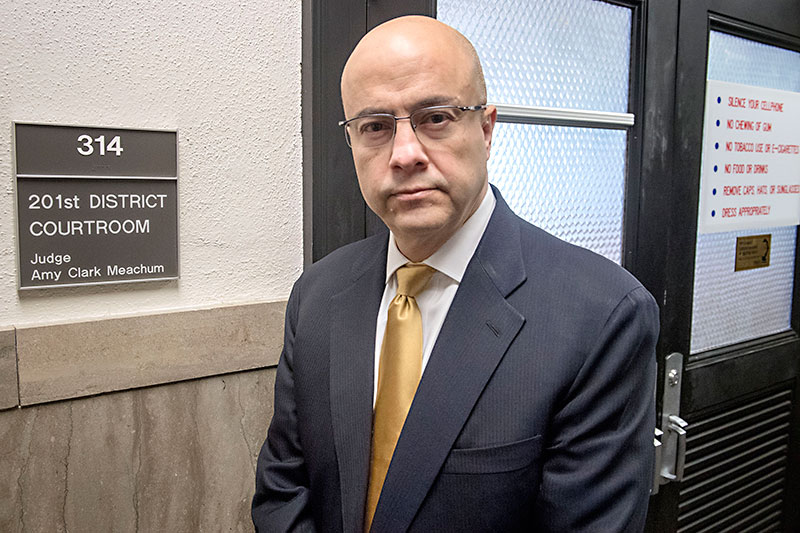 Dr. Robert Van Boven at prior court proceedings in 2020. (Photo by John Anderson)

On Wednesday, Sept. 29, Dr. Robert Van Boven will appear before the Texas Supreme Court, in an appeal proceeding of his long-running effort to defend his name and reputation from the official intransigence of the Texas Medical Board. Van Boven hopes to force the agency to fully acknowledge his exoneration from charges of wrongful behavior.

His appeal to the state Supremes – styled Robert Van Boven vs. Scott Freshour, et al. – specifically accuses certain TMB board members and attorneys (Freshour is TMB general counsel and former executive director) of acting “ultra vires” (outside their legal authority) in refusing to take exonerating action that Van Boven argues is required by state law. In 2018, Judge Dustin Howell of the 353rd District Court excluded two of the TMB staff lawyers from Van Boven’s claims, but ruled that the suit could proceed against Freshour and the other board members – yet Howell declined to issue an injunction requiring corrective action. The TMB (represented by the Attorney General’s office) appealed, and the Third Court of Appeals ruled in January of 2020 that all the TMB officials are protected from liability by “sovereign immunity.” (The appeal proceedings have been repeatedly delayed by the COVID-19 pandemic.)

Van Boven says he is encouraged by the Supreme Court’s acceptance of the appeal – and adds that he himself will be presenting his oral argument to the Court. Overcoming the sovereign immunity defense – which protects officials even for “erroneous” actions – will undoubtedly be difficult, but Van Boven believes state law and the TMB’s own regulations are on his side.

But most extraordinary about this entire case is the lengths to which the TMB and AG’s office have been willing to go – and the enormous legal resources they have been willing to expend – all to avoid simply, explicitly, and clearly notifying the federal agency which tracks physician disciplinary cases that Van Boven was exonerated of the charges made against him.

In 2015, the TMB placed “male patients only” restrictions on Van Boven’s neurology practice, after unconfirmed claims by two female patients of “boundary violations” during physical examinations, despite Van Boven’s otherwise unblemished record and in the midst of his bitter dispute with the for-profit Lakeway Regional Medical Center over poor hospital practices. Two years later, the claims against Van Boven were finally adjudicated, in a week-long hearing before Administrative Law Judge Hunter Burkhalter of the State Office of Administrative Hearings.

However, the TMB attorneys refused to direct the National Practitioner Data Bank – the federal database of charges against doctors — to remove or “void” the original charges against Van Boven, listing only a “revision” report, and NPDB administrators deferred to the state’s judgment. Moreover, TMB lawyers then prevailed upon former SOAH chief judge Lesli Ginn to pressure Burkhalter to resign in lieu of termination — for transparently specious reasons, and effectively because he had the temerity to rule against the TMB.

The NPDB is a major information resource for health care employers, and the continued listing of the original charges against Van Boven (despite a “revision to action” addendum), he says, has rendered him effectively unemployable as a neurologist. Van Boven believes this is all a consequence of his original dispute with the Lakeway hospital, after he complained about inadequate or dangerous hospital practices, eventually filing several formal complaints with the Department of State Health Services – all of which were confirmed by DSHS and federal investigators.

Van Boven’s hearing before SCOTX will consider whether the TMB should be required to direct the NPDB to “void” or remove the claims against the doctor. The TMB and the AG continue to insist that – despite the 2017 SOAH exoneration – it has no obligation to remove the published charges against Van Boven. Most recently, Deputy Solicitor General Bill Davis – one of at least a half-dozen state lawyers Attorney General Ken Paxton has assembled to defend the TMB from its ministerial obligations – submitted a Sept. 20 letter to the Court, arguing that the TMB simply followed federal NPDB guidelines, and therefore Van Boven’s only legal recourse would be to appeal in federal court.

Baylor Law Professor Ron Beal, often cited as the foremost authority on Texas administrative law, has submitted amicus briefs in support of Van Boven, as have the Texas Medical Association, the Association of American Physicians and Surgeons, and former Texas House Member Bill Zedler. Specifically in response to the Deputy Solicitor’s letter, Beal wrote, “none of the legal issues in this lawsuit could be raised or decided by the federal judiciary.”

Beal concluded: “[T]he shocking last-minute surprise of the Deputy Solicitor General is merely a red herring; a legal nullity. I suggest he convince his clients to stand down and do the right and legal thing … [and] voluntarily send the void notices. The great news is that we will not waste the time and energy of this Court on oral arguments and a written opinion …”

If that doesn’t happen … the case before the Supreme Court (ROBERT W. VAN BOVEN M.D., D.D.S. V. SCOTT FRESHOUR ET AL. (20-0117)) is scheduled for oral argument Wednesday Sept. 29 at 9am. The livestream will be available at this link: https://www.texasbarcle.com/CLE/TSC.asp. Filings before the court are posted at https://search.txcourts.gov/Case.aspx?cn=20-0117&coa=cossup.

For the full history, see austinchronicle.com/robert-van-boven.