A Chaotic Scene as APD Clears Encampment Outside City Hall 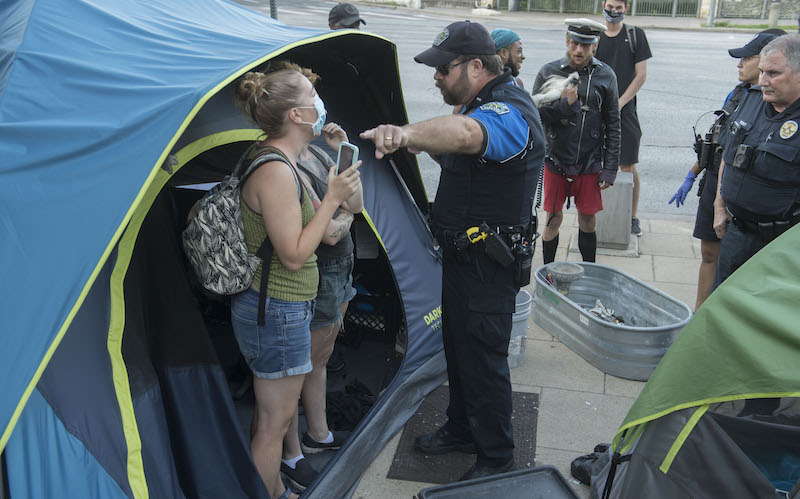 A chaotic scene unfolded outside of Austin City Hall Monday morning, as the people sleeping there in protest of the reinstated ban on public camping were awoken by police officers and told to move any belongings to make way for planned sidewalk construction.

Some campers and protestors told the Chronicle that police gave verbal notice on Saturday, June 12; others said they were told on Sunday that if they did not move their belongings by 10pm that night, they could be arrested. None saw any written notice of the impending camp clearance.

“Apparently they’re doing construction and they need everyone here to move,” one person camping at City Hall, Smokey Quartz, told us. “They told us they need to move and are now threatening to arrest this man who is homeless and sleeping on the sidewalk.”

Quartz repeatedly asked Austin Police Department officers and other city staff present at the scene to see written notice of the planned construction (the permits for such work are typically posted near the worksite), which was finally produced more than an hour later. In the meantime, officers and other city workers began dismantling and discarding tents, even before the arrival of the violet bins intended for use as temporary storage. Some campers helped move the belongings of those not present so they would not be discarded.

“Austin Police and other City departments are working together to clear an area outside City Hall, on the corner of Guadalupe and Cesar Chavez, which has been designated for construction,” a city spokesperson said in a statement. According to a right-of-way excavation permit obtained by the Chronicle, the planned construction appears to be work along the curbline, ramp, and crosswalk at the corner of Cesar Chavez and Guadalupe, as well as repairs to the shared-use path on the Drake Bridge (S. First Street). The permit was issued on May 19 and work had been scheduled to begin on June 7.

“Members of the Homeless Outreach Street Team (HOST) and APD’s District Representatives have met with people around City Hall to inform them about the upcoming construction,” the spokesperson continued. “This morning APD officers have been talking to people staying in tents in this area and have informed them that they are required to move. Downtown Austin Community Court is providing access to violet bins for people to keep their personal belongings safe. Those who refuse to comply with the direction may be given a citation for violating the camping ordinance, or be placed under arrest if they fail to comply.” 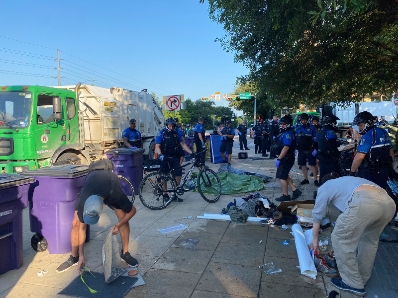 Volunteers help move and save belongings of campers during the cleanup. (Photo by Austin Sanders)

The city’s original plan was not to force anyone to move out of the City Hall camp until Aug. 8. But three city sources confirmed to us independently that word came down from city management about the planned clearance late on Friday, June 11, giving the city departments and partner agencies that could help people at the scene, like DACC or Integral Care’s behavioral health unit, little time to plan for ways to offer assistance. The late decision also gave APD little time to prepare a safe enforcement plan, as evidenced by the conflicting information offered by officers to people in the camps.

As the City Manager’s Office began circulating plans about the operation among relevant city departments, a city press release went out to members of the media announcing the beginning of Phase 2 of its Proposition B enforcement plan. “From Sunday, June 13, when the City moves into Phase 2 of implementing the new ordinances, APD will generally issue written warnings, and may issue citations for violating the camping ordinance if they encounter individuals who have already been warned,” the news release said.

In the statement provided to us on Monday morning, the spokesperson reiterated that the Prop B enforcement plan allowed for arrests at any point if an individual’s behavior “poses an imminent danger to themselves or others.” Blocking the right-of-way for the planned construction, the spokesperson said, constituted a threat to the safety of individuals camping near the construction sites.

It appears at least seven* individuals were arrested at the scene and taken to the Travis County Jail for magistration, booked on charges including interfering with public duties and failure to obey a lawful order, both Class C misdemeanors. The city spokesperson had previously said DACC had opened up for walk-in magistration beginning at 7:30 a.m. to process individuals arrested for an “applicable Class C misdemeanor.” Instead of being booked into the jail, those whose cases are diverted to DACC can be offered social service support.

Campers took up residence along the block surrounding City Hall after Prop B, approved by voters May 1, restored criminal penalties for public camping that had been removed by City Council in 2019. Those staying there say they are camping in protest of the city and its partners' inadequate response to homelessness. “I’ve been waiting here for housing for over 40 days and I don’t know when I’ll get placed anywhere,” William Bradford, one of the people at the camp, told us. “Housing is a human right and I’m here protesting for my rights.” Others said they have been told by agencies doing outreach among the unhoused that it could be as long as three years before they are placed into a housing program, because the waitlists at various providers are so long.

The protesters have become a political liability for City Manager Spencer Cronk, under pressure from property owners surrounding City Hall as well as the officials inside to take action against the campers. Segments on local TV stations and on Fox News have stirred up fear over the camp; although there have not been any reports of violence, Council Member Mackenzie Kelly told Fox 7 Austin on May 30 “it’s getting out of hand... At what point will someone get seriously hurt, for this to stop?”

Editor's note June 15 9:39am: This post has been updated with new information about the number of arrests. We'll continue to update as we receive more details from APD and DACC.

Austin Police Funding Restored; Is It Too Much, or Not Enough?
The 2020 city budget finds itself coming full circle