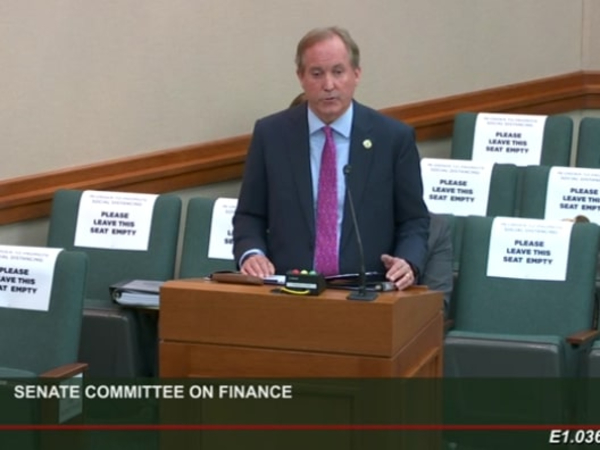 Saying she didn't "know that it is fair to any defendant" to be forced to respond to a suit filed less than 24 hours prior, Livingston, the longest-serving judge in Travis County, opted instead to set a three-hour hearing in two weeks to allow both sides to make their best case. "I don't know why there's any emergency," she noted. "People have been wearing masks for a year."

Paxton's mean tweets and Henery Hawk theatrics (he's already done hits on both Fox News and Newsmax) come as no surprise, especially since he's 2-for-2 in prior cases challenging local COVID-19 restrictions in Austin and El Paso. In both instances, district judges elected, like Livingston, in solidly blue counties sided with local efforts to slow the spread of infections at particularly severe points in the pandemic, but were overruled by more pliable GOP appellate courts.

Livingston, as well as defendants Mayor Steve Adler and County Judge Andy Brown, all expect this case to follow a similar path. “Judge Brown and I will fight to defend and enforce our local health officials’ rules for as long as possible using all the power and tools available to us," Adler said in a statement issued Thursday night after Paxton's lawsuit was filed. "We promised to be guided by the doctors, science and data as concerns the pandemic and we do everything we can to keep that promise."

Committing to issue her ruling the same day as the trial, Livingston acknowledged "It's a big deal to all of you, I know, and to the public." However, the plaintiffs failed to persuade Livingston that acting immediately was essential to, as the lawsuit claims, avert "irreparable harm" to the state of Texas, even if Paxton is highly likely to succeed on the merits of his case, as demonstrated by his prior victories.

Those are standard criteria for securing a temporary injunction, but how is the state harmed by Austin keeping its masks on? In this suit, as in his prior case against El Paso County, Paxton effectively argues that local leaders' insolence in disobeying Gov. Greg Abbott's executive orders is intolerable regardless of the substance of the provisions in question. So even if Adler is correct in saying "Masks work! The Attorney General is simply wrong," it doesn't matter.

While the COVID-19 mask wars have become mired in performative partisan conflict, there are plenty of conservatives as well as liberals who have misgivings about this expansive view of Abbott's power to decree reality. The status quo in Austin is that the public health rules established by the local health authority (that's Dr. Mark Escott, also a defendant in this suit) are enforceable by local ordinance; violating them is a Class C misdemeanor.

Unlike Adler's emergency orders to limit bar and restaurant hours on New Year's weekend (or those issued in El Paso), which could clearly be superseded by ones from the governor, Texas statute broadly grants local health authorities power to make (and cities and counties to enforce) such rules."Wearing masks is perhaps the most important thing we can do to slow the spread of the virus," Adler said in his statement. "We are not aware of any Texas court that has allowed state leadership to overrule the health protection rules of a local health authority.”

Paxton demanded via Twitter on Wednesday that Adler and Brown comply immediately with Abbott's latest executive order making Texas "free and open." The city and county's read of the legal room means either Escott changes his rules, which local electeds cannot force him to do (although they could replace him as health authority if so inclined), or they amend the current ordinance, which requires an open meeting with an agenda posted days in advance, as prescribed by state statute that Paxton's own agency enforces. The embattled, indicted AG has several irons in the MAGA fire right now (he's also making time to shriek on TV about President Biden letting COVID-infected brown people cross the border) so maybe he just overlooked that part. We'll see in two weeks if he's gotten more focused. 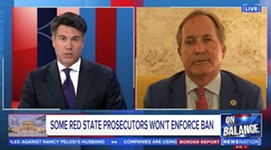 This Week in Ken Paxton’s Brain: Sodomy
How is our attorney general being a dick this time?