UPDATED: Seven more likely to face prosecution in May incidents 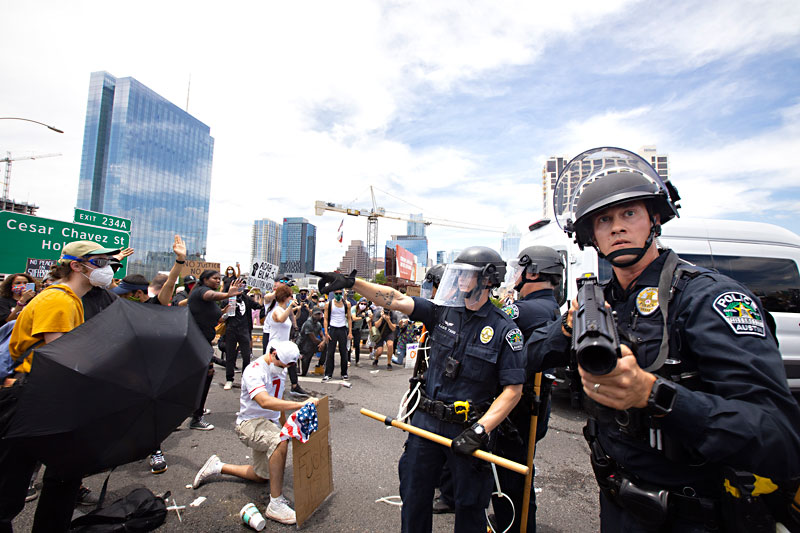 A chaotic scene on I-35 near APD headquarters on May 30. (Photo by Jana Birchum)

Austin Police Chief Brian Manley has disciplined 11 officers for misconduct that took place during the May 30 and 31 protests against police brutality, a city spokesperson confirms.

Seven additional officers have been placed on administrative leave while the Travis County District Attorney’s office reviews their cases. These officers are expected to face criminal prosecution through the Special Grand Jury process for their actions against protesters who took to the streets after the deaths of George Floyd in Minneapolis that week and of Mike Ramos, fatally shot by APD Officer Christopher Taylor in Southeast Austin on April 24. Police use of “less lethal” lead-pellet munitions and tear gas, as well as other uses of force, sent multiple protesters to the hospital, some with what have proved to be life-altering injuries.

D.A. Margaret Moore’s office tells us that the seven cases "are on hold until the DA-Elect is sworn in,” but that will be presented to the Special Grand Jury “after the first of the year.” Of course, Moore won’t be making those decisions at that point; her successor, José Garza will be. It’s clear that Garza intends to prosecute the cases, as he campaigned prominently on a commitment to move all police brutality cases to grand jury. But it will be up to Garza and his team to determine when the cases are ready — as in, having the best chance of successful prosecution — to be presented to the grand jury.*

Nov. 26 and 27 – that is, Thanksgiving and the following Friday – marked 180 days since the protests, and the end of the window within which APD can investigate and Manley can discipline officers for misconduct under Texas law, unless he seeks an extension in each case. At some point, the chief did write to Texas Attorney General Ken Paxton to seek 11 such extensions; it’s unknown as of yet if these involve the same officers (multiple cases involving multiple officers have been under review). The city spokesperson told the Chronicle that “Chief Manley has completed his review of all known complaints/incidents” from May 30 and 31.

Manley and Office of Police Oversight Director Farah Muscadin are expected to provide more information on the disciplinary action later this month. That communication could outline the discipline Manley issued in each case as well as the scope and severity of discipline recommended by OPO. In the past, Muscadin has expressed frustration that Manley and other APD brass have repeatedly disregarded her policy and disciplinary recommendations. APD did not respond to requests for more information before publication. District Attorney Margaret Moore also did not respond to questions about the seven cases her office is reviewing, or whether those cases will be held over (as is the Ramos shooting case) for her successor José Garza to handle come January.

On Oct. 29, in its last public statement regarding its investigations into protest incidents, APD made reference to nine separate allegations stemming from actions taken on May 30 and 31. The department has declined to release critical incident video from any of these incidents, citing the active status of the investigations. While APD said it was also attempting to identify officers involved “in other protest-related incidents”, the following officers have been named publicly as subjects of internal investigation for improper use of force:

A report published in the New England Journal of Medicine by Austin trauma surgeons who treated patients that weekend catalogued 19 injuries sustained by people hit with lead-pellet rounds. One of the patients was Sam Kirsch, who was shot in the head by an APD officer and subsequently lost some vision in his left eye. Kirsch is now suing the city and the officer to recover damages for past and future medical expenses.

Kirsch is being represented by Rebecca Webber, a partner at the Hendler and Flores law firm. (Webber is also representing Brenda Ramos, mother of Mike.) In a statement, Webber told the Chronicle, “As a human being living in this community and raising my kids here, I am so relieved that the process seems to have worked regarding 11 officers. The devil will be in the details.”

Those details will be closely watched by local criminal justice reform activists and council members that have pushed the department to hold its officers to greater accountability. Any disparity in how much and what type of discipline was recommended by OPO compared to what was issued by Manley will fall under close scrutiny. With the administrative process completed, OPO will contact individuals who filed complaints to inform them of the outcome of each investigation over the coming weeks.

This post has been updated since original publication to clarify next expected communications from APD and OPO on disciplinary action and to include a statement from the D.A.'s office.