On Thursday, June 4, in a lengthy order, a three-judge panel of the Fifth Circuit Court of Appeals extended its May 20 stay of an injunction issued the day before by U.S. District Court Judge Fred Biery, who had expanded the right to vote by mail in Texas.

In a stinging and condescending rebuke of Biery’s broad opinion, the panel said the state’s appeal of Biery’s order is likely to prevail on all counts, and criticized the federal judge for exceeding his authority and failing to wait for a related ruling of the Texas Supreme Court. The judges said Biery’s opinion will be “remembered more for audacity than for legal reasoning,” and faulted his intervention “just weeks before an election” (i.e., July 14). They argued that Biery had ignored a recent U.S. Supreme Court ruling (in the Wisconsin election case) warning against court interference “on the eve of an election” – while ignoring entirely Biery’s acknowledgment of that warning in making his decision in May, weeks before early voting begins.

The court’s order anticipates a full hearing of the case at some time not yet posted on its calendar, but almost certainly too late to have a direct effect on planning for the July election (early voting begins June 29). (The Biery order was also a preliminary injunction, pending a full hearing of the suit filed by the Texas Democratic Party and several individual Texas voters.) The May 27 Texas Supreme Court ruling cited repeatedly by the Fifth Circuit order declined to expand the definition of “disability” in the state Election Code to include "lack of immunity" to the coronavirus. But the Supreme Court reiterated that the judgment of personal health status for in-person voting purposes belongs to the voter, who can request a mail ballot from county election officials.

In a press release, Texas Attorney General Ken Paxton applauded the Fifth Circuit order, saying in part: “I applaud the Fifth Circuit for staying the federal court’s erroneous decision and preventing widespread mail-in balloting while the case proceeds. … The unanimous Fifth Circuit ruling puts a stop to this blatant violation of Texas law.” (Nowhere does the ruling cite current violations of Texas law, blatant or otherwise.)

In a statement responding to the Fifth Circuit order, TDP Chair Gilberto Hinojosa said in part, “I vehemently disagree with the Fifth Circuit Court stay. … We find ourselves in the midst of a once-in-a-century pandemic. Voters who are rightfully worried about the safety of in-person voting should have the option to vote by mail. The Constitution prohibits divvying up our rights by our age, gender, or race, and the Fifth Circuit decision of today would allow voters of a certain age different voting rights than the rest of us. … Judges are obviously disagreeing with one another about this important issue. Ultimately, we’re going to need direction from the U.S. Supreme Court.”

For more on this continuing story, follow the Daily News and the Chronicle’s print edition. 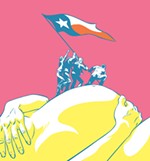 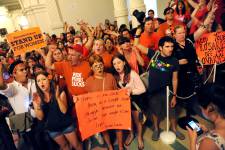 HB 2 Back in Court: Judges Get Critical
Abortion providers “encouraged” by judges’ skepticism