By Austin Sanders and Mike Clark-Madison, Protesters and police collide on Sunday (photo by John Anderson)

Describing himself as “crushed” by the weekend’s conflict, a visibly emotional Manley sought to emphasize “that is not what we set out to do as a department … this weekend.” Whether that matters to the city, its restive residents, and its leaders will soon become clear.

Manley addressed the weekend’s most serious incidents, which have been widely discussed on social media. On Sunday, a Black man who was recording video of the protests in front of APD headquarters at I-35 and Eighth Street was hit by a beanbag projectile apparently aimed at the person standing next to him, who (Manley said, citing the city’s HALO security camera footage of the events) was throwing items at the phalanx of officers blocking the entrance. The victim, whose name has not been released, then fell and may have sustained a further head injury; when volunteer medics sought to remove him from the scene for treatment, Manley conceded, spectator video shows them in turn being fired upon by officers. The victim is currently in critical condition and “fighting for his life,” Manley said, choking back tears. 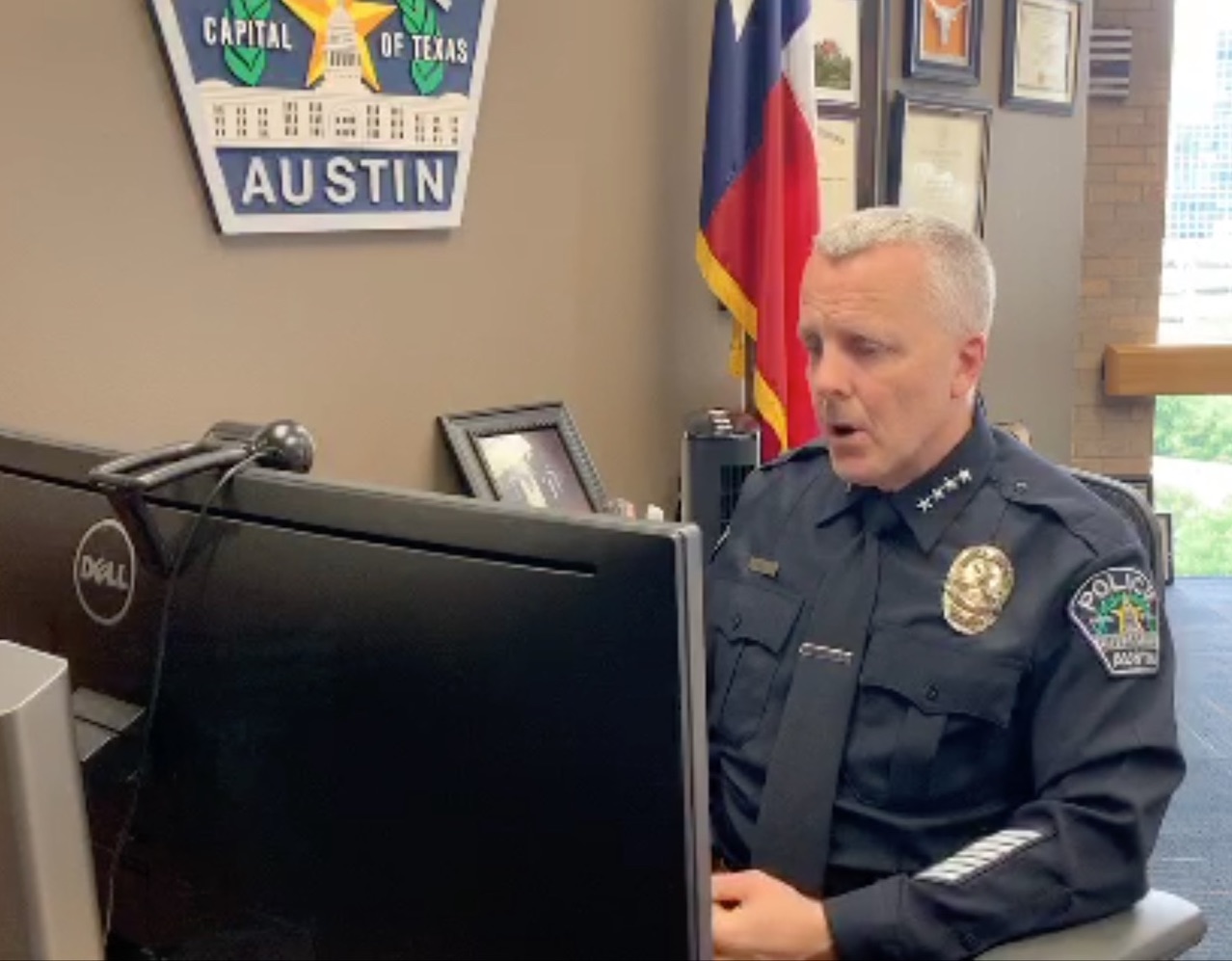 Another incident, occurring on Saturday, involved 16-year-old Brad Levi Ayala, whose family and friends have organized a GoFundMe for his treatment, and who was hit in the forehead with a “less lethal” round, also documented by spectators, while many yards away, on the hill along the northbound I-35 access road beneath several luxury apartment buildings. He was last reported to be in serious but stable condition.

A third widely shared incident, involving a pregnant Black woman struck in the belly, did not have such grave consequences, according to Manley, with the victim potentially able to be treated at the scene; the Chronicle is seeking to confirm. All of these are being examined as Level 1 investigations, said Manley – the same as other officer-involved shootings.

Despite these "tragic incidents … that did not go the way they should have gone,” Manley told reporters, “I also saw tremendous acts of compassion” from his officers, as they tried to “create space” for protests and displays of the community’s justifiable pain and rage, prompted by national events and the killing of George Floyd in Minneapolis, and also the “very concerning and critical incident here” – the death of Mike Ramos in police custody a month ago.

“The community wants to have those conversations, and that opportunity was truly taken away from them this weekend,” Manley said, placing the onus for the weekend's violence on “others who joined that group for reasons other than peaceful protest.” (Though Manley did use the word “infiltrators” at one point, he appeared to be trying to avoid fully laying blame on “outside agitators” from either the hard left or the hard right, unlike his colleagues in other cities, or the president.) The chief said APD’s support for, and even participation in, the exercise of the right to protest had two limits – when violence is directed at police officers or other demonstrators (e.g., rock-throwing), and allowing crowds to overtake I-35, which Manley said created a far greater safety hazard for people throughout the city.

Manley and other APD and city leaders will brief City Council on how officers responded to protesters over the weekend, and what changes might be enacted ahead of future demonstrations. Council is not posted to take any action, partly because there is little authority a City Council has over a police chief’s actions in Texas; they cannot direct Manley to curtail the use of “less lethal” weapons, let alone force individual officers to do so. (Pepper spray, for example, is part of the equipment issued to every APD officer.)

But Council Member Greg Casar told us there is a powerful catharsis that can be shared by giving people impacted by police violence – especially those who were demonstrating peacefully – time to speak at a public meeting. More than that, Casar said, the special-called meeting will give the city’s elected leaders an opportunity to publicly ask “hard questions” of police officials.

“We need to make sure that our own police officers are not the ones escalating tension at protests,” Casar told the Chronicle. “We can lift up Black lives by having our elected city leaders ensure the police department allows demonstrators to do so safely.”

The special-called meeting, set to follow the regular Council meeting on Thursday, June 4, will also give CMs an opportunity to discuss reforms they want enacted at the department, such as how officers can control crowds at protests without restoring to “less lethal munitions.” Manley told reporters Monday that he is exploring what those changes might look like with department leaders, but is unclear what policies might be changed or when the changes would occur.

A statement issued from CM Natasha Harper-Madison indicates the meeting will look ahead to decisions that will be made as the city adopts a budget for fiscal year 2021. “When talking about meaningful change,” Harper-Madison wrote, “all options should be on the table. That means we should look at accountability measures, training policies, crowd control tactics, how we equip our officers, community policing, staffing, and budgets.”

Harper-Madison has led efforts from the dais to bring reform to APD. A resolution she introduced in December 2019 has tasked City Manager Spencer Cronk with auditing how the department trains officers; meanwhile, activists have urged Cronk to fire Manley and other public safety officials. Thus far, there has been little concrete action on either front, but CMs and activists are in agreement that the weekend’s protests could signal a sea change in how Austin responds to calls for reform of its police department.