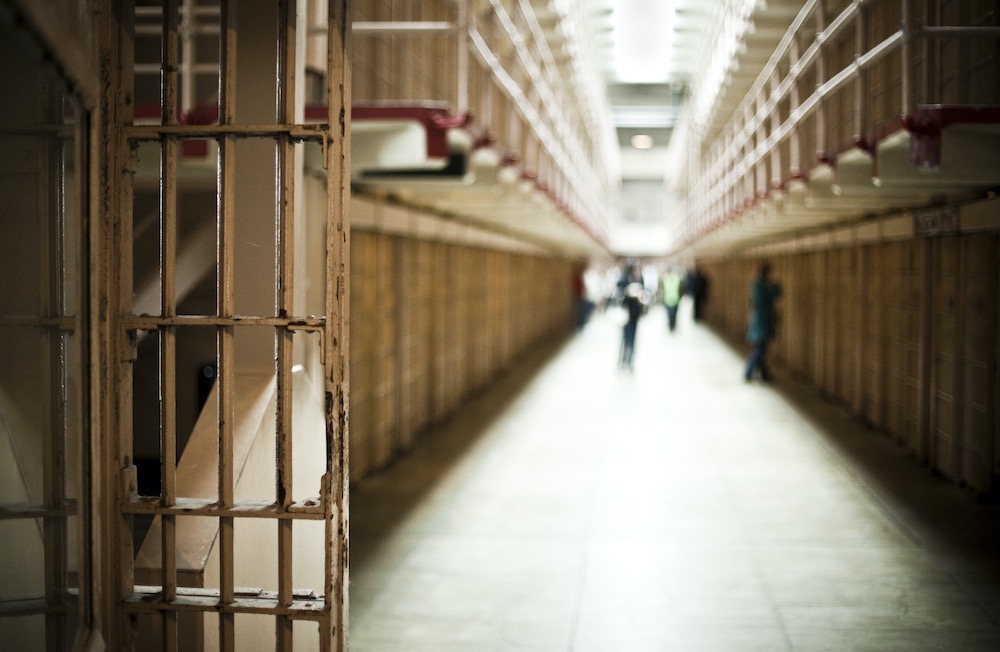 Last month, Travis County criminal justice officials felt fairly successful in their efforts to reduce the overall jail population and to provide personal recognizance (PR) bond releases – that is, not levying cash bail – for most people accused of nonviolent offenses.

Jail statistics were encouraging: According to the county’s daily statistics, the total number of inmates had fallen from 2,164 (including 45 inmates held in Hays County) on March 16, the date jail reduction measures began in response to the COVID-19 pandemic, to 1,649 on April 1, a decrease of 23.8%.

The accelerated release of inmates from the Downtown and Del Valle jail facilities continued an uneven but persistent downward trend from an inmate population of more than 2,500. Partly, that’s a response to pressures for criminal justice reform, and a concerted effort by prosecutors, law enforcement, and judges (both in the county’s trial courts and the Austin municipal judges who serve as jail magistrates) to bring numbers down. That effort began to show results last fall, and was then redoubled in response to the public health crisis, as jails and prisons are concentrated and extremely dangerous hot spots for disease transmission among inmates, correctional workers, and their families.

Roughly, these new approaches distinguish between nonviolent offenders, who have become eligible for automatic PR bonds, and those accused of violent crimes or otherwise judged to be threats to public safety. In February and March, the county’s misdemeanor and felony criminal judges, respectively, issued standing orders with explicit standards for the county’s Pretrial Services staff and the magistrates to consider as new accused offenders arrive at Central Booking. As the pandemic has increased in scope, and more of daily life has been curtailed by “stay home, work safe” measures, jail intake has also decreased due to fewer arrests for minor offenses.

On Sunday, March 29, Gov. Greg Abbott threw a monkey wrench into the project with an executive order forbidding PR bonds for anyone currently accused or previously convicted “of a crime that involves physical violence or the threat of physical violence.” This means offenses that were resolved years ago now must be reviewed by magistrates: “For example,” said Travis County Attorney David Escamilla, “if somebody arrested for a DWI has on his record a 10-year-old bar fight to which he pleaded guilty, he is no longer eligible for a personal bond.” Escamilla and District Attorney Margaret Moore both noted that “physical violence or the threat of physical violence” is not defined in state law. The order also does nothing to prevent violent offenders with the means to post cash bail from bonding out of jail. 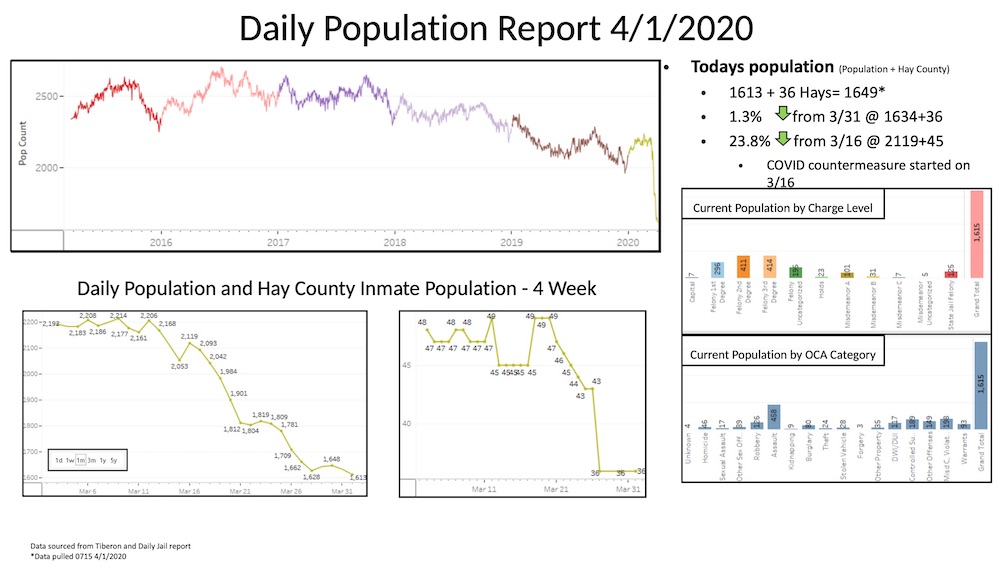 Abbott’s maneuver was mostly aimed at Harris County, whose plan to release about 1,000 of its more than 8,000 inmates prompted alarming headlines and backlash from Houston Police Chief Art Acevedo and his colleagues. Abbott’s order warns against the “broad-scale release of arrested or jailed individuals” in response to the pandemic, but Moore told the Chronicle, “We’re not using a broad brush.” She and Escamilla remained confident that the local process responsibly balances public health and public safety, but they have followed the governor’s order to review criminal records. 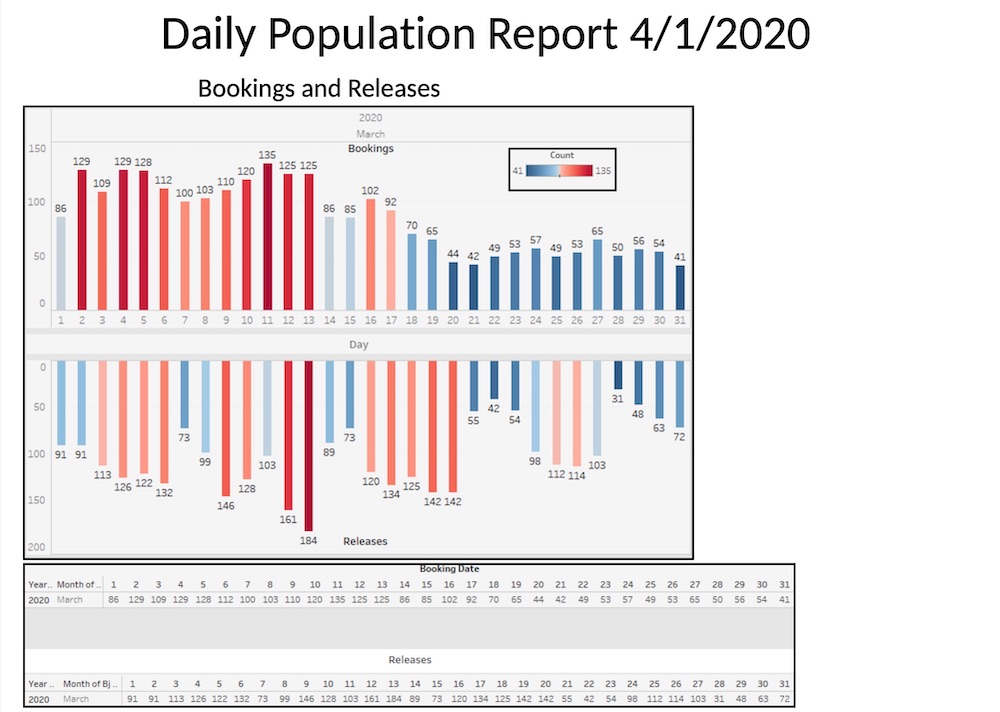 The governor’s order also doesn’t allow standard “good time” credit for prisoners (potentially cutting sentences effectively in half). “They can earn it,” said Escamilla, “but as long as this order is in effect, they can’t use it.” Moore said she believes that Travis County officials have been reducing jail populations “the right way,” and that the governor’s order “doesn’t help much.” While not retroactive for those already released, Escamilla said the order “slowed us down” and he expected “only a handful” of prisoners would finally be affected by Abbott's action. “Thank God we were already working on it,” he said, “when the order came down.”

There are currently no confirmed cases of COVID-19 in the county’s jails; Sheriff’s spokesperson Kristin Dark told the Chronicle on Tuesday, April 7, that 21 inmates are in quarantine, not all of whom are symptomatic, attended by medical personnel. As well, there are 163 recently booked inmates in isolation for 10-14 days before entering the jail population – since the Downtown jail cells have individual air flow, the facility is actually well prepared for these circumstances, Dark said.

Whatever their offenses, 1,600 inmates in close quarters represent a potential health risk to themselves, jail staff, and visitors. Requesting the governor withdraw his order, the Texas Criminal Justice Coalition issued a statement noting, “Texas jails house roughly 68,000 people, more than 40,000 of whom are legally innocent awaiting trial.” The TCJC points out that under the order jails will be less safe, those who can afford cash bail will be favored, and “low-income people – the majority of jail detainees – will remain in jail indefinitely” and forfeit their right to a speedy trial. In Harris County, the Texas Tribune reported this week, misdemeanor judges are ignoring the order, and instead obeying the 2019 federal consent decree that mandates automatic PR bonds for most misdemeanor defendants. A lawyer advising Harris County judges told the Tribune that Abbott’s order is “likely unconstitutional under state and federal law.”