"All things on the table" to help Austinites weather crisis 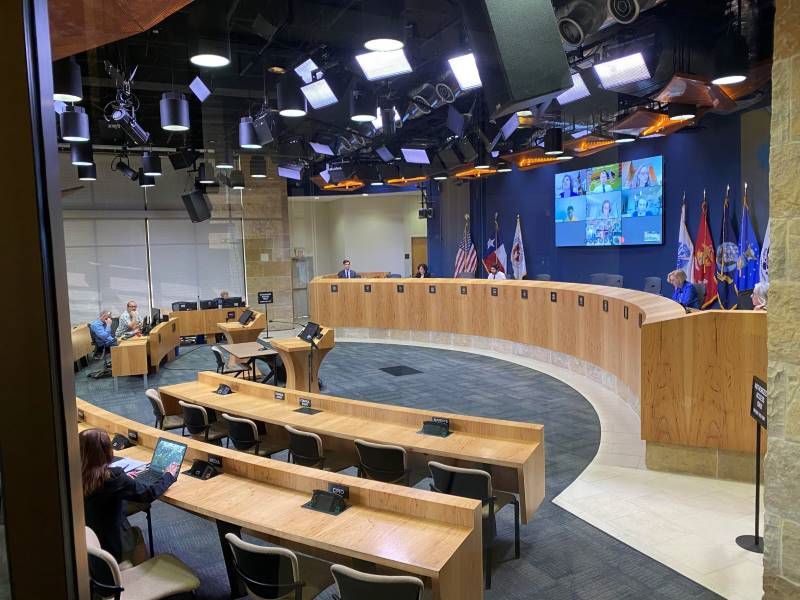 Behind glass, a widely spaced Council gets things done. (Photo by Austin Sanders)

In a deserted City Hall devoid of its usual Thursday throngs of staffers, lawyers, lobbyists, advocates, and active citizens, the Austin City Council held its first-ever semi-virtual meeting, with the public and media watching from home as the city sheltered in place to combat the spread of COVID-19.

Other than building security, the ATXN cameras, and one pool reporter (this reporter) to represent local news media at the daily COVID-19 press briefing, the atrium outside Council Chambers was empty; inside, the five council members on site and the city manager, spaced widely apart on the dais, were joined by their colleagues in the Zoom Gallery View (aka “Brady Bunch view”) now familiar to many of their constituents, working from home.

This new normal, made possible by the waiver of Texas Open Meetings Act requirements during the pandemic, allowed Council to take its first steps down the long road of relief and recovery. The centerpiece of this week’s agenda, a suite of items to help Austin residents and businesses maintain some financial stability during the crisis, passed unanimously.

The city’s residential and commercial renters will have an extra 60 days to stay in place (and shelter in place) before facing eviction proceedings. The emergency anti-eviction ordinance, which builds on existing orders from Mayor Steve Adler and Travis County’s justices of the peace, prevents landlords from posting notices to vacate, locking out tenants, or removing tenants’ property for 60 days after the last rent payment. The measure’s lead sponsor, CM Greg Casar, framed it as a necessity amid the layoffs and furloughs striking city’s working families. “No one should lose their home during the pandemic,” he said. “It’s wrong and it’s also terrible for public health.”

The anti-eviction ordinance goes into effect immediately, but renters and tenants groups are looking ahead to the summer: What will happen after this grace period when two months of back rent is due, plus any late fees a landlord chooses to charge? During the phone-in public comment portion of the meeting (another social distancing measure), callers thanked Council for halting evictions, but urged further action.

“I don't view this as enough at all, this is merely kicking the can down the road,” Lily Velona said. “I will not be able to pay rent on April 1, and I do not see how I will be able to be rehired to work with young children or work in restaurants, which have been both of my jobs, in the coming months.” Velona and other callers urged Council to enact a rent freeze, a power Adler told reporters later the city doesn’t have under state law. A freeze would also create financial hardships for local landlords with few properties who depend on those rentals to make a living, while leaving large corporate real estate owners unscathed.

But landlords, tenants, and others may find relief via a sweeping COVID-19 relief resolution, also passed unanimously, introduced by CM Jimmy Flannigan in the early days of the pandemic. Back then, the cancellation of South by Southwest seemed like the lowest point Austin could reach; in the weeks since, after lengthy virtual deliberations on the Council message board, the measure grew in scope along with the pandemic itself.

City Manager Spencer Cronk and the city’s departments have now been charged with finding options for relief to the workers hit hardest by the pandemic thus far: those in the creative, hospitality, service, retail, restaurant, music, child care, and construction sectors among them. The definition of “emergency workers” with guaranteed access to childcare could be expanded to include more Austinites still at work. Hotel occupancy taxes could be repurposed (pursuant to state law) to help those in the hospitality industry hit hard by the cancellation of SXSW and subsequent restrictions on non-essential travel throughout the nation and world. (Hotels are allowed to continue renting rooms under the current “stay home, work safe” orders.)

The COVID-19 relief resolution also tasks staff with sourcing personal protective equipment and sanitation supplies for medical workers and child care facilities; identifying ways to combat food insecurity; and even to provide “resources for virtual social participation to reduce isolation and loneliness.” In all, the resolution creates a mountain of essential work for city staff. When that work will translate into actual programs is less clear. The resolution does not have the “report back” timetables usually included in these directives; it’s expected that as soon as a program is ready for Council approval, staff will bring it forward. That could be through special-called meetings, or budget amendments, but Cronk made clear: although it’s still early, “everything is on the table,” and he doesn’t need more direction from Council to develop the city’s COVID-19 response.

Council also approved other relief efforts, including the Austin Economic Injury Bridge Loan Program, allowing the city to leverage federally backed loans through the Small Business Administration to help local businesses and nonprofits. About $4.5 million in disaster loans from the U.S. Department of Housing and Urban Development and SBA will be reallocated to help provide immediate financial relief, and Cronk has also been charged with finding ways to help defray higher utility costs as people spend more time (including work time) at home.

But toward the end of the meeting, Casar acknowledged that the city’s actions alone would not be enough. The risks and sacrifices required to protect public health would primarily be borne by working class families, he said: those who have to keep showing up to their jobs “because they work with their hands.” He added, “We have to stand up and refuse to choose between people getting sick and dying, and losing their jobs and income. We have to save those lives and make sure, regardless of the challenges, [that] everyone in the city can meet their needs.”