Temporary modifications aimed at combating the spread of COVID-19 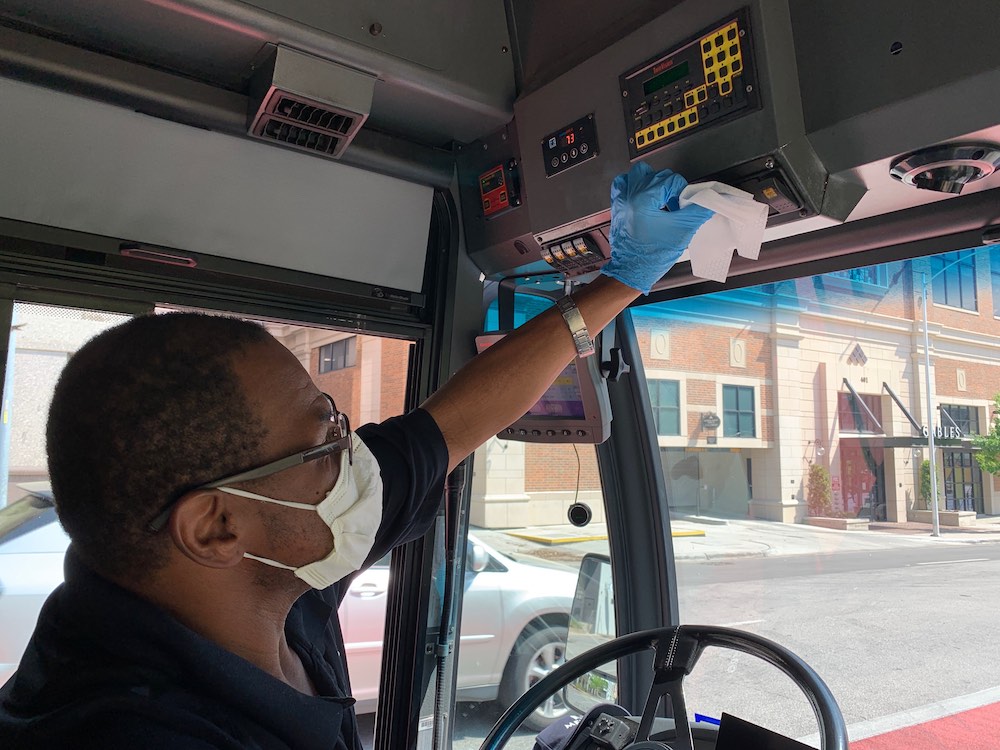 Cleaning crews board buses as they stop at transit facilities to clean hand touch surfaces with disinfectant wipes. (image via Capital Metro)

As part of its efforts to ensure both passengers and bus operators remain safe, last week the agency announced CapMetro’s modified schedule. Most MetroBus and MetroRapid services shifted to Sunday-level service every day, while MetroRail (still operating its normal weekday service) adopted a reduced weekend schedule, among other changes. Starting next week, all MetroExpress routes – except Route 990 connecting the Manor-Elgin area and Austin – will be suspended until further notice. In the meantime, the agency is encouraging MetroExpress riders – who rely on the commuter bus service for traveling between North Austin and Downtown – to find alternative services via other MetroBus, Rail, and Rapid routes still operating (find most recent service updates at www.capmetro.org/covid19). Additionally, Sargent reiterated CapMetro will continue practicing a temporary rear-boarding policy for passengers not paying with cash.

Furthering its increased sanitation efforts, the transit agency opened 50 part-time positions for cleaners on Sun., March 22, to help clean its vehicles and facilities throughout the day. The agency also posted 100 operator positions. According to Sargent, operators, as well as contractors and CapMetro’s administrative staff, are covered under the agency’s newly implemented supplemental sick leave policy, which allots an additional three weeks of paid leave for team members who might be affected by COVID-19. (As addressed in the Facebook Live broadcast, one CapMetro employee in a “non-public facing role” self-reported a COVID-19 diagnosis on Monday, though Sargent emphasized the agency had not received any official documentation of that diagnosis at the time of the broadcast.)

According to information released by CapMetro’s Communications & PIO Program Manager Mariette Hummel, ridership was down 62% on Mon., March 23, with a recorded 38,850 passengers. On Wed., March 25, ridership continued to drop, hitting 65% in the first set of ridership data CapMetro received after shelter-in-place orders were implemented Tuesday night. For comparison, ridership daily totals between March 2-12 varied between 96,000 to 107,000 passengers. Though ridership has declined, Hummel noted CapMetro is still providing 40,000 essential trips a day.

In light of COVID-19, transit agencies across the nation are grappling with devastating losses to fare revenue, and the financial blow doesn’t stop there. As Sargent pointed out, CapMetro, being principally funded through sales tax revenue, has also felt the economic impact of local businesses forced to shut down or reduce operations as part of COVID-19 precautions. On Wednesday, the U.S. Senate unanimously passed a historic, $2 trillion relief package meant to ease the pandemic’s economic impact. The deal, which expands on a Republican proposal issued last week called the Coronavirus Aid, Relief and Economic Security (CARES) Act, includes $25 billion in federal aid for public transit agencies. During CapMetro’s Facebook Live broadcast, Sargent said the agency did not yet know how that $25 billion would break down for greater Austin’s local share.

Sargent added, “We need to ensure that this federal aid package keeps our system running, keeps the high frequency network running, and makes sure that we’ve got all of our operators in place,” in addition to funding training and vehicle maintenance. In a March 25 release from Hummel, CapMetro expressed confidence in the House of Representatives passing the legislation this week. “This would be the single largest appropriations package for transit in history and would provide significant relief to Capital Metro,” read the update. “This COVID-19 emergency aid package recognizes transit as a critical service that's been operating during this public health crisis to help keep essential community functions possible.”