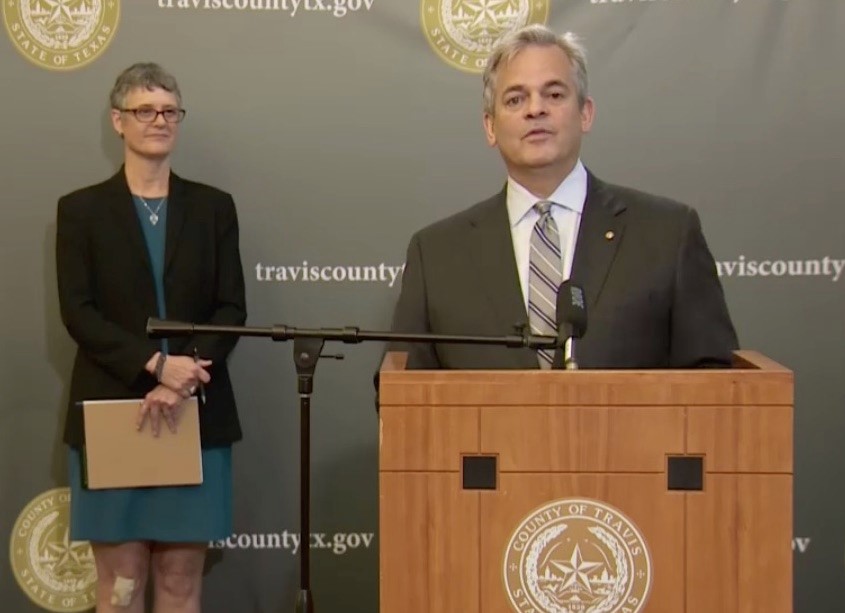 As expected, the City of Austin, Travis County, and Williamson County have issued shelter-in-place measures- dubbed "Stay Home, Work Safe" - to combat the spread of COVID-19, the disease caused by the novel coronavirus, in the Austin metro area.

The order for Austin, which will remain in effect until April 13 unless extended as circumstances warrant, can be viewed here. Other cities and counties in the region and across Texas have imposed similar restrictions, but Gov. Greg Abbott has not yet called for statewide shelter-in-place measures despite calls to do so from many local leaders and Democratic legislators.

"We cannot wait until the hospitals are overrun," Escott said. "These decisions are not as difficult as the ones we want to avoid" - rationing medical equipment and bed space and, ultimately, "who gets the opportunity to survive or not. ... These decisions are being faced across the globe, and they are ones we can prevent, or at least delay substantially" until more health care capacity is available.

Escott said that if we instead lifted the measures already put in place (like closing the schools, restaurant dining rooms, and bars and limiting gatherings to 10 people) - as President Trump is apparently eager to do - data and modeling indicate a "need to provide 20,000 hospital beds per day in this community" as the COVID-19 pandemic spikes, putting our first responders and health care workers at massive risk. "I will not ask them to sacrifice themselves because we failed to act."

Right now, according to Escott and Dr. Lori Palazzo, his counterpart in Williamson County, there are only 15 confirmed COVID-19 cases (as of 12pm) in local hospitals; emergency rooms and other facilities are reporting volumes that are steady, or even slightly lower than usual. Escott attributed that good news to both people following prior orders to limit hospital visits and the cancellation of elective procedures, but to maintain that stability, the region needs to reduce its number of physical interactions between individuals by 90% from pre-pandemic levels.

Current data, and modeling being led by UT Health and Dell Medical School, suggest that orders put in place before today have resulted in 50% social distancing, and that the mandated closures of businesses and public spaces in today's "Stay Home, Work Safe" orders would bring that to 75%. To get to 90% will require individual compliance and good behavior. "We are confident that this is what is needed," said Travis County Judge Sarah Eckhardt. "We are really relying on our local heroes" - that is, Central Texans residents of all kinds.

Eckhardt indicated that punitive enforcement of the orders (violations are misdemeanors with up to $1000 fines and up to 180 days in jail) would be reserved for the most egregious scofflaws, with local public safety being more often called to assist people rather than arrest them. Those first responders are, of course, among the many types of people whose work is exempted from the order, and it's not always easy to say what you can't do now that you already weren't doing due to the pandemic. Eckhardt and Austin Mayor Steve Adler focused on the 90% goal to center their orders on behavior rather than context.

"We know how good it feels to do everything we can to keep everyone safe," said Adler, citing Austin's collective action during the 2018 bombings and the flood-induced boil-water mandate. "When you go to sleep at night, I want you to count the number of people you interacted with through the day, and see if you're being successful in decreasing [interactions] by 90%. We have to track that number. But we can do this."

Adler, Eckhardt, and Escott were joined by Palazzo, Williamson County Judge Bill Gravell, and other WilCo elected officials to drive home the need for regional collaboration - especially in the absence of statewide mandates and the now-obvious partisan divide coloring COVID-19 response across the country. "We're working very hard to walk in unison," said Gravell, a Republican. "I have more confidence that we can today than I did a week ago" thanks to the cross-party and cross-boundary collaboration seen in Central Texas.

While stressing that he "trusts and respects" Abbott and understands his position, Gravell said "we need [Abbott's] support today and in the days ahead" - a direct call for the governor to stay strong and, if not move to a statewide mandate, at least not buckle to pressure from his right. (Including Lt. Gov Dan Patrick, who went viral yesterday for telling Fox News viewers that grandparents are, or should be, willing to die to save the economy for their grandchildren.) Speaking for the group, Eckhardt emphasized that the "stay home, work safe" order "is the best way at this moment to lessen both the health and economic impacts of COVID-19."