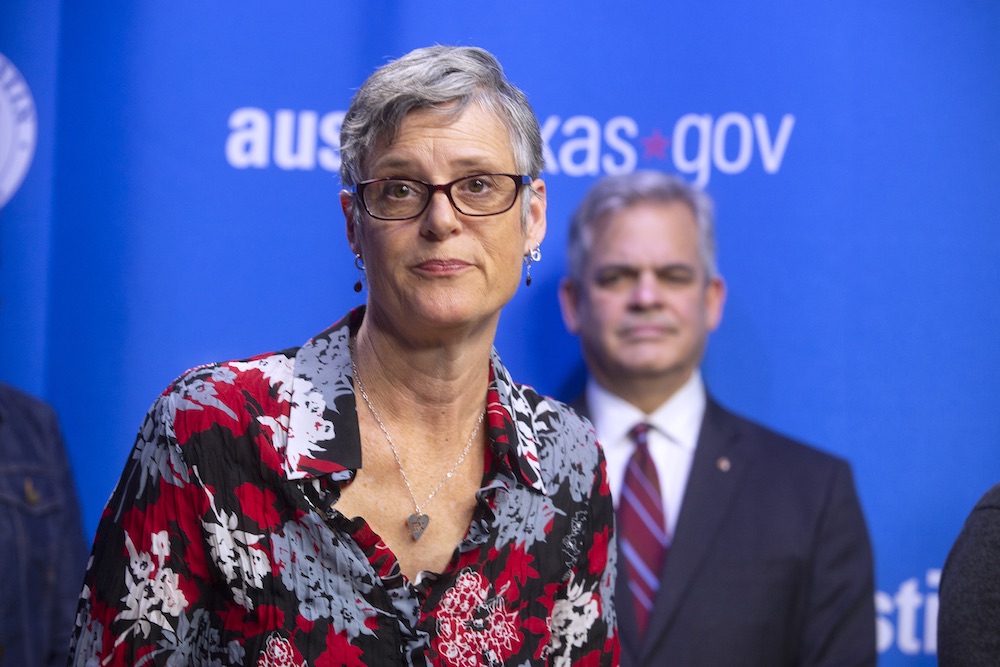 In an expected yet still emotional farewell, Travis County Judge Sarah Eckhardt stepped down from the seat she's held since 2015 and declared herself a candidate in the upcoming, though yet to be called, special election in Texas Senate District 14 to replace the retiring Kirk Watson.

After the Commissioners Court voted to accept Eckhardt's resignation and appoint her predecessor Sam Biscoe as her interim replacement, she told her colleagues and staff at the county (where she's worked for 20 years) that "this is the most fun job I've ever had." Pausing several times to compose herself, Eckhardt pledged that "I will never resign from public service" and lauded Travis County as a "beacon of progressive prosperity" – a status that "will not continue, and may even be reversed, if we don't end the darkness at the state level."

Hence her desire to jump into the SD-14 fray, even as she acknowledged that "if I win, there will be dark days in the Senate chamber when I think 'What the hell have I done?'" Eckhardt has already mixed it up plenty of times with the state's GOP leadership, and Commissioner Brigid Shea (who holds what was previously Eckhardt's seat) cheered her on in her nascent campaign, saying "The Legislature desperately needs people who are really public servants; I'm really distressed at the tone coming out of the Lege attacking local government and officials [as] wasteful, reckless, ne'er-do-wells. … You can tell the story of the value of local control [and be] a powerful spokesperson and advocate."

Eckhardt already has one formidable opponent, state Rep. Eddie Rodriguez, D-Austin, in the special election that, presuming Gov. Greg Abbott calls it soon expected, would be held on May 2 (the next uniform election date, not with the primary run-offs on May 26). The other semi-declared major candidate, Austin Council Member Greg Casar, would likely run to the left of both Rodriguez and Eckhardt; nobody has yet jumped in from the GOP side – in a special election, all candidates run together regardless of party –and Commissioner Gerald Daugherty, the court's lone Republican, said "I don't know what the party is going to do." At tense times like these, Daugherty said, "I want good, competent people more than I want philosophies" – coming as close as he likely can to endorsing his outgoing colleague, who he described as "one of the smartest people I've ever been around, who can be a great public official in any capacity, and if you're over there, I'll tell [his fellow Republicans] 'You need to work with her, because her heart is in the right place.'"