State Rep. Eddie Rodriguez, D-Austin, the longest-serving member from Travis County in the Texas Legislature, made it official on Saturday, March 7: He's running to succeed retiring Sen. Kirk Watson in a likely May special election, and he's doing so with a solid base of local Democratic allies.

That show of force and solidarity, and his nascent campaign's mantra that Rodriguez can hit the ground running when elected, will help define the contours of a yet-to-be-called special election contest against two other all-but-declared local heavyweights, Travis County Judge Sarah Eckhardt and Austin City Council Member Greg Casar. Stressing his years of working closely with Watson on issues that matter to Austin - from affordable housing to craft brewing - Rodriguez told the crowd, "I want to work in the Senate because I want to make Texas a more progressive place for everyone."

Since being elected, Rodriguez hasn't had to worry too much about campaigning in his solidly blue seat - his lopsided victory on Super Tuesday was his first contested primary ever, and he last faced a Republican in 2010. So although he's a formidable candidate, his ability to raise money and win support across the district is untested, and he showed no sign on Saturday of taking either for granted. Pledging to run "head-first into a grassroots campaign, talking to as many people as possible," Rodriguez followed his Austin announcement with a tour of SD-14, with stops in Smithville, Bastrop, Manor, Pflugerville, and West Lake Hills planned before nightfall. 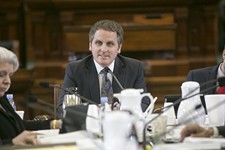