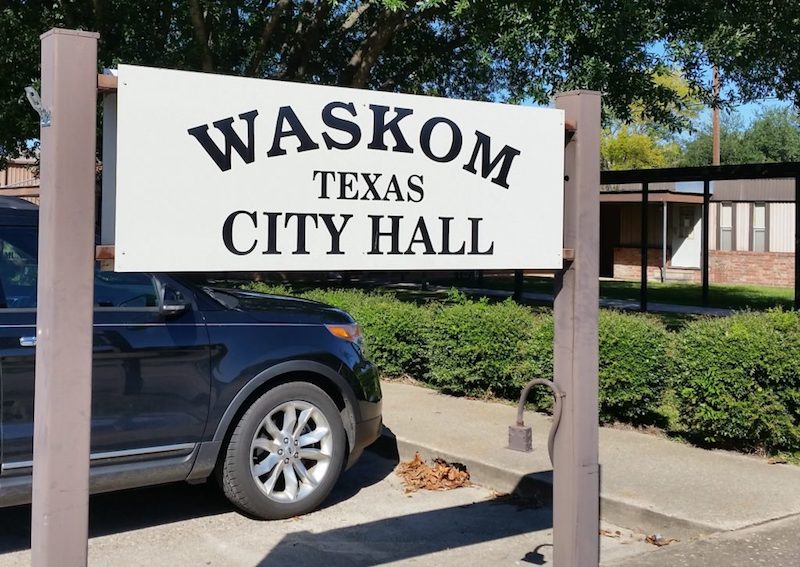 Waskom, on the Texas-Louisiana state line, was the first town to declare itself a "sanctuary for the unborn." (Image via City of Waskom)

In response to a wave of tiny East Texas towns passing ordinances to ban abortion and condemn pro-choice groups as crime syndicates, the ACLU of Texas and its national parent organization are hitting back with a federal lawsuit.

The complaint, filed in U.S. district court in Marshall, names seven cities as defendants for violating pro-choice advocates’ rights to free expression and association under the First Amendment. By ideologically designating those groups as criminal entities, the towns are illegally imposing punishment without a fair trial, the ACLU argues.

“These ordinances are unconstitutional,” said Anjali Salvador, staff attorney for the ACLU of Texas. “Abortion is legal in every state and city in the country, and cities cannot punish pro-abortion organizations for carrying out their important work – especially when they do so in a way that violates their First Amendment rights.”

In a campaign led by anti-abortion activists at Texas Right to Life, the all-male Waskom City Council passed an ordinance in June 2019 declaring itself a “sanctuary city for the unborn” and abortion an “act of murder with malice aforethought.” Not long afterward, the Texas cities of Gary, Joaquin, Tenaha, Rusk, Naples, and Wells followed suit. Of course, the ordinances can’t take effect at this point considering Roe v. Wade is still the law of the land; however, if the historic precedent is overturned, abortion would then become illegal in those municipalities (combined population: 12,120).

The measures didn’t just (symbolically) ban abortion but also barred eight reproductive rights organizations (including Planned Parenthood and Whole Woman’s Health) from operating within city limits, deeming them “criminal.” Abortion assistance non-profits the Lilith Fund and the Texas Equal Access Fund, who are represented by the ACLU in the suit, were also targeted; neither one performs abortions, but they do provide direct financial assistance to women who want to end their pregnancy but can’t afford the full cost. They also advocate and educate people in east Texas about reproductive rights and access and seek to reduce abortion stigma; TEA Fund had planned to expand its scope of advocacy work in the area.

That education work is especially crucial in light of the highly misleading ordinances. By claiming to ban the constitutionally protected procedure, the ordinances create the impression that the residents of those cities can’t exercise their right to an abortion. “Although that part of the ordinances will not take effect unless Roe v. Wade and Planned Parenthood v. Casey are overturned, all residents of these cities are likely not aware of this limitation,” notes the ACLU. And without the abortion support groups around to inform citizens of their rights – one of their core missions – that cloud of disinformation is destined to become much worse.

“A major part of our work is to make sure every Texan knows their rights and can find legitimate, fact-based information about getting an abortion – regardless of income or zip code,” said Amanda Beatriz Williams, executive director of Lilith Fund. “These would-be abortion bans are deliberately designed to confuse people about their rights and push safe abortion care further out of reach.”

And violating the vague ordinance could subject the groups to prosecution. If a person or entity “procures, aids, or abets an abortion,” they could face a civil cause of action. While Roe may not get overturned anytime soon, that section is immediately enforceable, casting a chilling effect on the groups. Since the law is so broad, it’s not clear what qualifies as a violation – billboards and social media campaigns to combat abortion stigma? Training volunteers (even remotely) on how to advocate against local anti-abortion restrictions? Hosting an event? It’s hazy (and likely intentionally so) and that’s part of the problem.

“Plaintiffs are also concerned that the ordinances have exacerbated hostility to abortion advocacy, making any advocacy in these cities more difficult and also potentially unsafe for employees,” write the ACLU. Kamyon Connor, executive director for TEA Fund, called the extreme ordinances another “tactic” for abortion opponents to “score political points” by infringing on the ability of their groups to educate and activate communities about their rights and the resources available to them.