A Numbers Game in County Court at Law No. 4

A central issue in the County Court at Law No. 4 judicial campaign is the “backlog” of cases. The Tanisa Jeffers campaign sent the Chronicle a page of court statistics misrepresenting the current trial numbers, insisting they showed the backlog had grown. Jeffers now insists it was an innocent mistake. 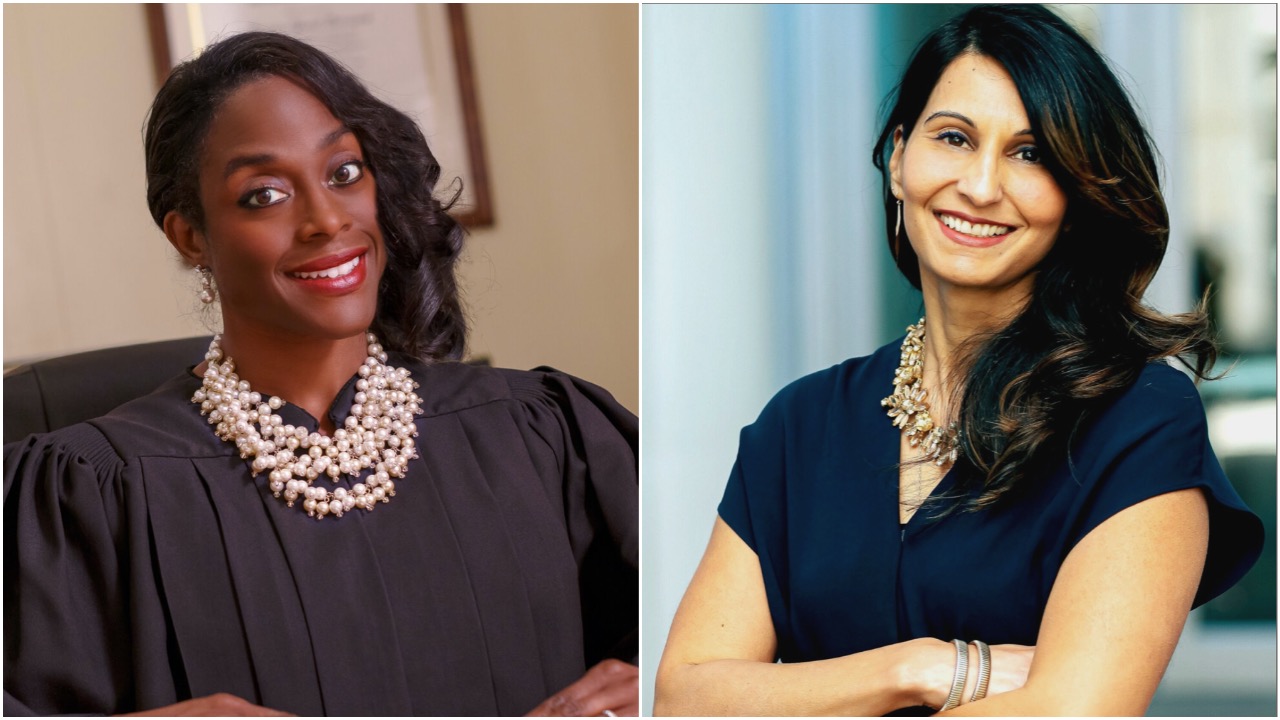 Associate Municipal Judge (and defense attorney) Jeffers and incumbent Judge Dimple Malhotra are both candidates for the CC4 bench in the Democratic primary. The third candidate is defense attorney Margaret Chen Kercher.

In early February, Jeffers’ husband, supporter, and law partner, attorney Brian Bernard, sent a 3-page document to the Chronicle, apparently reflecting three recent months (December, January, February, each for the previous month) of various County Court at Law statistics (for all seven Courts at Law). His transmittal email read: “Dimple [Malhotra] keeps saying she has reduced the county court 4 jury trial backlog by 20% but that seemed questionable to me. This document clearly shows that on her watch the number of jury trial cases has doubled, rising to its highest level ever at more than 600!”

Bernard’s reference was to the number of “Jury Trials” listed for CC4 (among many other gathered statistics) – 398 in December, 366 in January, and (allegedly) 659 in February. It turns out the accurate February 3 number (i.e., for January) for jury trials – confirmed by Court Administration – is 305. Malhotra assumed the bench in November, when the (October) jury trial number was 387. Using that number as a benchmark, the number of jury trials has indeed declined by just over 21%.

On Tuesday, Feb. 18, I forwarded the document provided by Bernard to Malhotra for possible comment. Then things got interesting. Malhotra called me briefly to say she was “absolutely appalled” by the document, and that she had immediately recognized that the CC4 statistics for February were inaccurate. “I review these all the time,” Malhotra said. (I had told her only that I had received the document from a person in the Jeffers campaign.)

Malhotra referred me to the Court Administration staff, who prepare these monthly statistical summaries for the benefit of the judges and other staff. After several email exchanges, I spoke at some length to Court Administrator Debra Hale. Hale said that the third page of the document (“February”) was not only inaccurate, it summarized fewer statistics than are currently used, and was even in an earlier, non-lineated format. By reviewing some of the details, Hale had discovered that the third page actually dated from October 3, 2016 – although the header at the top of the document read “February 3, 2020,” on the pdf version I had received from Bernard. It appeared that the date had been altered somehow, and at the time we (wrongly) suspected a clumsy effort at intentionally replacing the date – that is, a forgery.

When I called Bernard to ask about the discrepancy, he said he had no idea how the date-change had happened – but that he had received the document from “a judge.” He called me back to tell me that the sender had been Judge Brenda Kennedy, presiding judge of the criminal district courts. He then speculated that Kennedy, nominally his wife’s friend, had somehow intended to “sabotage” Jeffers’ campaign by transmitting a forged document. (The next day, he withdrew that charge.) I pointed out to him that if anyone had indeed altered the document to misrepresent 2020 statistics, they were in fact hoping to sabotage Malhotra’s campaign.

I contacted Judge Kennedy, who said she had simply responded to a request from Jeffers for recent court statistics, although she told Jeffers she didn’t normally keep those documents but might have a few on her computer. “I didn’t understand why she was asking me,” Kennedy said, “when she could get them all directly from Court Administration.” Moreover, it is apparent from the transmitted emails that Kennedy could not have provided court statistics for February. Her email to Jeffers is dated Jan. 31 – the February statistics (summarizing the previous month) were not yet available on that date.

As to Bernard’s speculation that the judge might be trying to sabotage Jeffers’ campaign, Kennedy said, “I don’t have a candidate in that race,” and later added via email, “All I can say is that he really must have completely lost his mind!”

The following day (Feb. 19), I spoke to Jeffers about the documents, and she insisted she had forwarded to Bernard (and now to me) the three-page attachments just as she had received them. With some trouble and with help from the Chronicle’s technical expert, I was able to read the attached third page – it was clearly marked “October 3, 2016” (repeated twice on the covering email sent to all the judges) with that date in the header. (The 2016 attachment was old enough that it was difficult to open without technical assistance.)

Jeffers insisted that when she opened the document on her computer, it changed to the current February date. I was dubious, but on Feb. 20 we met at the Chronicle, and she demonstrated the date-change to me. The Chronicle systems administrator, Brandon Watkins, confirmed the anomaly – he discovered that the original document had been set in the editing mode with “TODAY” in the header field, meaning it would automatically update to the current date, even though the information was from 2016.

Jeffers said she just wanted to confirm that there was no intent to deceive, and that her campaign had “never used or distributed” the questionable document because the information hadn’t been confirmed. She also insisted, repeatedly, that her husband is “not a part of my campaign” – although he was the first person to contact the Chronicle about her campaign (in early December), when he wrote, “Travis County needs Tanisa Jeffers to fix [CC4],” and he has spoken in her support at candidate forums.

Bernard subsequently repeated that he withdraws any accusation against Kennedy – essentially that it was a sudden, ill-considered reaction to the question of an altered or possibly forged document, and Jeffers reiterated to me that she does not believe Kennedy had anything to do with the altered document. However, Bernard later told Jeffers (who passed the fabrication on to Kennedy) that it was the Chronicle reporter (Michael King) who had implicated the judge. (Presented with direct evidence to the contrary, Jeffers withdrew that charge as well.)

“We never published that document, and haven’t used it on our website or in the campaign,” Bernard insisted. I pointed out that sending it to the Chronicle (with his accompanying charge against Malhotra) constituted publication (he disagrees). “I sent it to you for vetting,” he said. “I didn’t expect you to publish it without confirmation.” (Yet Bernard had originally claimed the document “clearly” demonstrated Malhotra was claiming reductions in the number of jury trials when they had actually “doubled.”) More recently, he has insisted that it was solely the Chronicle’s responsibility to confirm the information, and moreover that he provided it to us in a “private” email, in expectation of “anonymity” – to put it bluntly, that’s complete nonsense.

To summarize: the Jeffers campaign (in the person of attorney Brian Bernard), sent the Chronicle a document claiming to show that Malhotra was misrepresenting the current situation in CC4. The campaign made no reasonable effort to confirm the accuracy of that information, and reacted with outrage, further misrepresentation, and accusations against others when a reporter pointed out the inaccuracy. Jeffers is now blaming Bernard, and Bernard is blaming the Chronicle.

I asked Malhotra, the current judge of County Court at Law No. 4, if she had any comment on the document discrepancies. Malhotra pointed out that a candidate is responsible for her own campaign, and said: “If you are running to be a judge, and you would stoop to the level of falsifying information and trying to slander a sitting judge, that is a direct reflection of your moral compass and your ethics. And it’s not somebody you want to be sitting in judgment of others. The actions taken by her campaign speak for themselves.”

I also asked Malhotra about the actual, current “backlog” situation in CC4, and she said that she had used various strategies to reduce the number of jury trials to what she believes is a “manageable” level of around 300 – she mentioned “double dockets” (two days per week for jury trials instead of the previous one), reducing the number of automatic “resets” for trials, and other moves for scheduling efficiency. “There was some resistance at first,” she said, from prosecutors and defense attorneys, and even from her own staff. “It does mean a greater workload, but I think people have come to understand it also means greater efficiency, and that helps everyone.”

Malhotra added, “It can’t just be about the numbers – improving the numbers has to bring a better quality of justice in the court. These are difficult [family violence] cases, and it takes time for the state and for the defense to have these conversations with the parties. … The dynamics involved don’t lend themselves to trial in 90 days. … We’re dealing with families, and things that affect peoples lives – either a loss of liberty for the accused, or safety for victims. We have to deliver justice in a way that’s compassionate, every day this unfolds. That will be the real measure of my success.”