Why Does the Governor Want to Keep Refugees Out of Texas?

This episode of our weekly radio program The Austin Chronicle Show looks into Gov. Abbott's attempts to block refugees – meaning, persons forced to flee their countries because of persecution, war, or violence – from resettling in Texas in 2020.

The term "refugee" is frequently confused with "immigrant." Indeed, the governor himself seemed to be milking anti-immigrant sentiment when he formally announced that Texas wouldn't be taking any refugees in this year. Since that announcement, a federal judge has put a temporary halt to the Trump policy that prompted Abbott's opt-out. Staff writer Michael King tackled the subject in his "Point Austin" column this week, and he joined me on air to dig a little deeper into resettlement, speculation into Abbott's political aims, and the governor's pattern of picking on vulnerable populations.

...And then we do a tonal 180 to talk punk. Since August, Tim Stegall has been rolling out his history of Austin punk, chapter by chapter, in the pages of the Chronicle. (Find them all here.) He joined me to talk about his own baptism by punk, and why putting the scene's history down for posterity has become his passion project. We started the segment listening to ATX punk pioneers Big Boys' "Fun Fun Fun," a song Stegall chose for special reasons he gets into. For licensing reasons, we can't include the song in this rebroadcast stream, but you can check it out via video from the Austin History Center below.

Finally, two balloting deadlines sneaking up on us –
• The deadline to register to vote in the March primary is Feb. 3. You can download the application from the Travis County Tax Office, or use the application on p.13 of this week's issue. (Sorry, you'll have to supply the stamp and envelope yourself.)
• On to a ballot with slightly less intense implications for the future of American democracy... Voting for the Austin Chronicle Music Poll ballot closes Tuesday, Jan. 28. Cast your vote now, and see the winners unveiled at the 38th annual Austin Music Awards at ACL Live at the Moody on Wednesday, March 8. 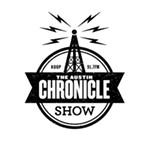