Officials and candidates comment on killing of Qassem Soleimani

If you’re wondering whether the U.S. killing of Iranian General Qassem Soleimani was either wise or legal, you needn’t consult either U.S. or Iranian officials. Iraqi Prime Minister Adel Abdul-Mahdi summarized the U.S. attack.

“We condemn in the strongest terms the assassination by US forces of Iraqi and Iranian figures," said Abdul-Mahdi. "… Carrying out operations to assassinate Iraqis and [others] on Iraqi soil is a flagrant violation of Iraqi sovereignty and a dangerous escalation.”

It’s too soon to know the larger consequences of the U.S. attack, but over the last few days elected Texas officials as well as 2020 candidates have been issuing responses. A brief, edited selection follows.

Sen. John Cornyn has yet to issue an official statement, but tweeted: “Suleimani was the architect and operational commander of the Iranian effort to solidify control of the so-called Shia crescent, stretching from Iran to Iraq through Syria into southern Lebanon. He is responsible for providing explosives, projectiles, and arms and other munitions that killed over 600 American soldiers and many more of our coalition and Iraqi partners just in Iraq, as well as in many other countries such as Syria. So his death is of enormous significance.”

Sen. Ted Cruz applauded the killing: “The end of Qassem Suleimani is welcome and long-overdue justice for the thousands of Americans killed or wounded by his Iranian-controlled forces across the Middle East, and for the hundreds of thousands of Syrians and Iraqi Sunnis ethnically cleansed by his militias. It is also long-overdue justice for our Israeli allies who have suffered decades of terrorism at the hands of Hezbollah terrorists commanded by his IRGC [Islamic Revolutionary Guard Corps] Quds Force. The message to all those who mean harm to America is loud and clear.”

Democratic officials and candidates have generally responded with skepticism or condemnation. State Sen. Royce West, a candidate for the Democratic nomination to succeed Cornyn, said in a statement: “President Trump’s decision to direct the drone strike resulting in the killing of a top Iranian military leader without consulting Congressional leadership is irresponsible, and flies in the face of the Constitution and decades of collaboration between the executive and legislative branches of government.

“Effective change doesn’t come from the point of a gun or attack of a drone, but from diplomacy, and finding common ground. We’ve previously done that with Iran. Both of Texas’ U.S. Senators should be condemning the President’s actions today of not consulting congressional leadership. The consequences of President Trump’s actions are likely to be grave, and cost precious American lives. …"

Mike Siegel, campaigning for the Democratic congressional nomination in TX-10: “I condemn the Trump Administration’s targeted assassination of Qassem Suleimani. … This reckless escalation threatens countless lives—Iranian, American, Iraqi, and many others—and does nothing to make the United States safer. … Suleimani is not a non-state actor, but a top leader of a powerful nation. This is why the Constitution requires Congress to declare war. …"

Dr. Pritesh Gandhi, also a candidate for the TX-10 Democratic nomination, issued a statement: ”Suleimani was directly responsible for the deaths of innocent civilians throughout the region … However, by taking this action, President Trump has yet again thrust American troops into harm’s way. In a time when international norms are routinely violated, the President must be held to account by Congress. … The President has chosen to use military force without obvious regard to the outcomes. We simply cannot risk putting American troops and innocent civilians through yet another preventable war."

Julie Oliver, candidate for the Democratic nomination in TX-25, released a statement: “As Suleimani was a top Iranian official, our action has dangerously escalated tensions in the region, and the risk of war has never been higher. We can not allow the most corrupt president in history to drag this country into another disastrous war to distract from his own criminality. … We must work for an immediate de-escalation and stop the most corrupt president in history from dragging us into another disastrous foreign war. …”

Finally, U.S. Rep. Lloyd Doggett, D-Austin/San Antonio, issued an official response: “While Suleimani was undoubtedly evil, our foreign policy must focus on protecting Americans. Trump, who claims to know more than our generals, the intelligence community, and our foreign service officers, now risks endless escalation from an aggressive and malicious adversary. Through many years of disastrous conflict in Iraq and Afghanistan—so costly in both blood and dollars, we surely know wars are easier to get into than to get out of. … Trump’s actions strengthen anti-American forces and Iranian zealots. His recklessness has little to do with protecting Americans and everything to do with protecting Trump, the Master of Distraction. To avoid the loss of even more lives through endless escalation, we must find a better path forward.” 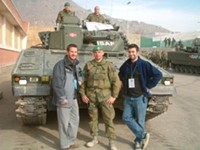