“HB 1888 is well named,” Terrell Blodgett told the Chronicle. “Since it’s a law that could have been enacted in 1888.” Blodgett joined a group of plaintiffs outside the federal courthouse Tuesday morning announcing a lawsuit against the Texas Secretary of State Ruth Hughs. 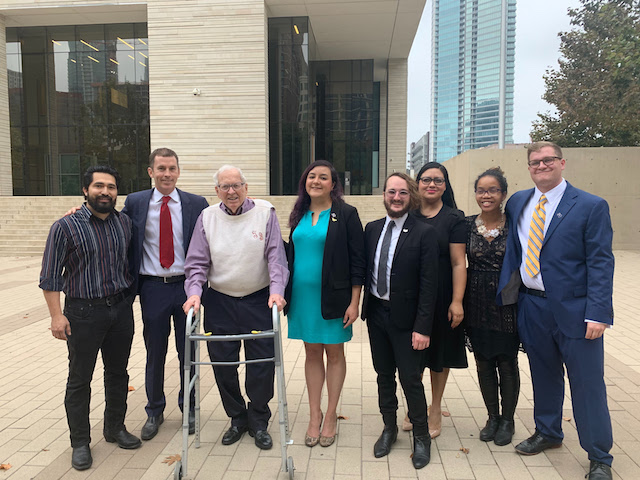 The groups of disenfranchised voters, young and old, are suing over a law (HB 1888) enacted by the 2019 Legislature that has forced the statewide closure of hundreds of temporary mobile voting locations that had provided voting access to students, the elderly, and others with limited transportation choices. For Blodgett – a 96-year-old WWII veteran, professor emeritus of UT-Austin’s LBJ School of Public Affairs, and former Austin assistant city manager – the change in the law meant that he was unable to vote in the Nov. 5 constitutional referendum election. It was the first opportunity to vote he’s missed in 75 years.

Blodgett was joined by representatives of the Texas Young Democrats and the Texas College Democrats – also plaintiffs in the lawsuit. Blodgett quipped, “I’m a young Democrat now,” before the student representatives described how closing the temporary mobile locations on campuses, due to HB 1888, has meant that many students will no longer have an effective opportunity to vote. Joe Cascino of the College Democrats recounted the disappearance of temporary voting locations at three Austin colleges, Texas State, UT-Arlington, Rice University, and elsewhere, adding that the limited transportation choices available to students meant many were effectively prevented from voting.

“[A] motivating purpose of HB 1888,” argues the lawsuit, “was to disadvantage young and old voters confronted with transportation hurdles by burdening their exercise of the electoral franchise. And the legislation was effective in accomplishing this purpose.”

The plaintiffs are represented by former city of Austin attorney Mike Siegel (currently a Democratic congressional candidate for TX-10) and Austin attorney Renea Hicks. The complaint asks that HB 1888 be found unconstitutional on several grounds, and in violation of the Americans With Disabilities Act, and the plaintiffs request an injunction against the law’s enforcement in the 2020 elections.

HB 1888, ostensibly aimed at school bond elections – Republican legislators accused school districts of “harvesting” voters by locating temporary polls on school campuses – now requires (with some exceptions) that any mobile voting location must operate for the full length of early voting – meaning that for many counties, the additional locations are both wasteful and cost-prohibitive. Before the law was passed, Travis County operated about sixty temporary locations – including a heavily used one at Westminster Manors, the Westside senior living facility that is now Blodgett’s home. That temporary poll location was closed, and in November Westminster residents were required to vote at the Howson Public Library. Blodgett’s limited mobility made it impossible for him to make the trip.

The lawsuit cites the First, 14th, and 26th Amendments, and the ADA, as grounds for overturning HB 1888, and requests “preliminary and permanent injunctive relief.” It echoes a similar suit filed in October by the Texas Democratic Party and the Democratic Senate and Congressional Campaign Committees. That suit is pending before Federal District Judge Lee Yeakel. It seems likely that the two actions will find themselves linked in court.