A recently released national ranking that places Austin ahead of any other Texas city for its commitment to reproductive health access is hitting a bittersweet chord with local advocates, who are reminded that the city still has a long road ahead. 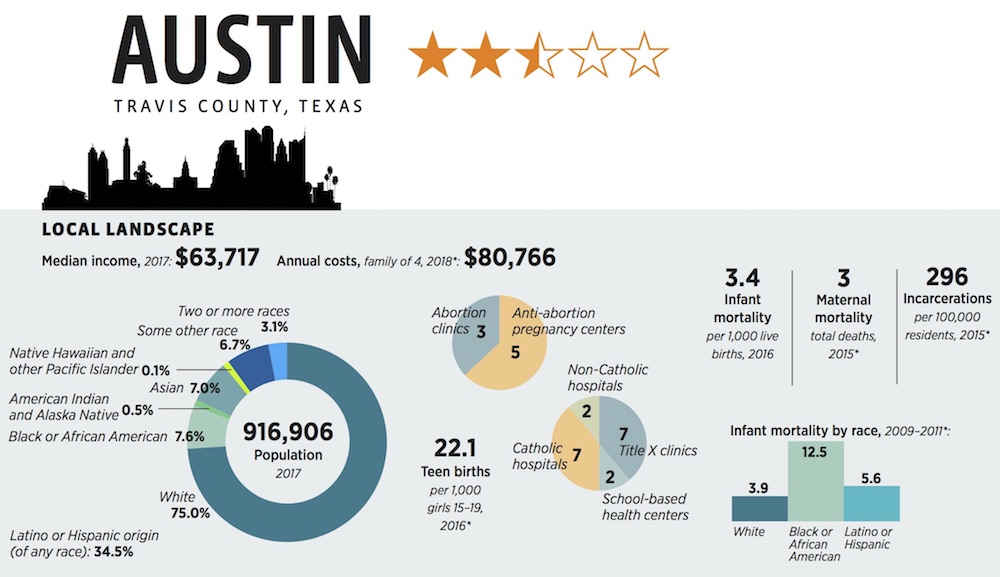 From the NIRH 2019 scorecard for Austin.

In its 2019 report, The National Institute of Reproductive Health ranked 50 of the largest U.S. cities based on a “reproductive freedom index” that factors in local government efforts including paid family leave, comprehensive sex education, and access to abortion clinics. From reducing barriers to abortion care to ending discriminatory insurance practices to advancing democracy as a whole, American cities are engaging in a “national countermovement” to protect and advance reproductive health, rights, and justice, said Andrea Miller, NIRH president.

Amid hostility from state and federal politicians, NIRH views municipalities as having a “unique opportunity” to mitigate the damage done. No better place in Texas to see that in practice than Austin, which has pushed back against the onslaught of state-led attacks on reproductive health care. Over the years City Council has earned points for its firm and vocal opposition to anti-choice state laws, funding of contraception and of STD/STI testing and prevention, support for Planned Parenthood, and (symbolic) support for abortion insurance coverage. Most recently, Council devised a creative workaround to Senate Bill 22, an extreme law passed during the 2019 legislative session that forbids cities from contracting with abortion providers or their affiliates. In an unprecedented move this September, the city added $150,000 to its Fiscal Year 2020 budget to help low-income women obtain logistical support for abortion access, like transportation and lodging.

For that, Austin takes the lead in Texas with two-and-half (out of five) stars, surpassing San Antonio and Fort Worth, each with two stars, and Houston and Dallas, each with one-and-a-half stars. Nationally, no city received five stars, but San Francisco came closest (four-and-a-half), with Chicago and New York close behind. Austin’s ranking is cause for celebration among local advocates and elected representatives but also a reminder of the uphill road – made more daunting by anti-choice state laws – to reach full reproductive freedom.

Absent oppressive state lawmakers, who seem to “make it their mission to shame and punish people who just need basic access to reproductive health care,” Austin and every city in Texas would be able to better “support and empower residents to control their own lives,” Mayor Pro Tem Delia Garza tells the Chronicle. “While it’s heartening to see that the work we’ve done in Austin is making a difference – from supporting community-based outreach and education, to expanding access to contraception and STD/STI testing, to funding logistical support for access to abortion care – this report is a reminder that we have so much work ahead of us to advance reproductive justice, here in Austin and around the state.”

Some of the items Austin is still lacking on its scorecard include: non-discrimination ordinances for its employees’ reproductive health decisions; expanded paid family leave; increased protections for abortion clinics and providers; and – as anti-abortion and non-medical crisis pregnancy centers continue to outnumber actual licensed abortion clinics in the community – regulations on the deceptive practices of CPCs. (Austin adopted such regulations in 2010, but they did not survive a court challenge by CPCs). A campaign launched by a coalition of reproductive rights groups, dubbed Repro Power Texas, has sought to lobby Council to strengthen its policies since 2017.

Aimee Arrambide, executive director of NARAL Pro-Choice Texas, echoes Garza’s point, saying “there is more work to be done...The reality is, too many Austinites still struggle to make ends meet and get the health care they need for themselves and their families.” Cristina Parker of abortion support organization the Lilith Fund says she can’t help but notice the modest score doesn’t “get any better” elsewhere in Texas. “I’m so glad there’s evidence of our progress on the scoreboard, but it also shows you much more work we have to do in our local communities,” said Parker.