This morning, the Texas Republican Party was busy imploding, and the enemy came from within its own ranks.

Right-wing activist Michael Quinn Sullivan of influential lobby group Empower Texans accused Republican House Speaker Dennis Bonnen, R-Angleton, of offering to trade press credentials for his media offshoot Texas Scorecard (previously denied by the House) for help targeting GOP incumbents in next year’s primary race during a June meeting, as the Chronicle previously reported. The conservative oil-money funded media/lobbying/PAC juggernaut headed by Sullivan is known for attacking who they consider moderate Republicans. Media passes, which grant wide access to the House floor, have long been desired by the psuedo-media group, so much so they took the lower chamber to court for supposed “unconstitutional viewpoint discrimination.”

In August, the House Committee on General Investigating voted to request the Texas Rangers' Public Integrity Unit examine the situation and the Texas Democratic Party, along with state Rep. Ana-Maria Ramos, D-Richardson, sued Sullivan in Travis County district court for at least nine campaign finance violations, as the backdoor meeting may have created an unregistered political action committee in violation of state law.

While Bonnen admitted to saying some pretty “terrible things” during the private Capitol rendezvous he steadfastly denied the backdoor deal claims. All the while, Sullivan assured the public he had the proof in an audio recording of the meeting but kept it under wraps – until today (Tuesday, Oct. 15). And it’s not looking good for the once-popular speaker.

After reviewing the audio, it’s clear Bonnen engaged in a quid pro quo:

“Let’s not spend millions of dollars fighting in primaries when we need to spend millions of dollars trying to win in November,” says Bonnen. “I wanted to see if we could try and figure that out… If you need some primaries to fight in – I will leave and [Rep.] Dustin [Burrows] will tell you some we’d love if you fought in. Not that you need our permission but what I would love to be able to do, candidly, is kind of have – I don't want to say an agreement – but kind of an understanding, look, you want to go pop some guys, if you're asking us – which you don't have to.”

Following the request for the activist to scale back on funding some GOP primary challengers, Bonnen offers up his services. “Let me tell you what I can do for you,” he says. “Real quick, you need to hear what I want to do for you...I’ll put your guys on the floor next session.” To sweeten the deal, Bonnen also suggested nixing press credentials for veteran state politics reporter Scott Braddock of the Quorum Report.

And Bonnen is also caught slamming a number of Democrats. He calls Rep. Jon Rosenthal, D-Houston, a “piece of shit” who “makes my skin crawl” and, quoting his chief of staff, says Rosenthal’s “wife’s gonna be really pissed when she learns he’s gay.” Bonnen also called Rep. Michelle Beckley, D-Carrollton, “vile” and “heinous”; Rep. Ana Marie Ramos “awful” and referred to liberals they’re hoping to beat in 2020 as “pieces of shit.”

And that’s not all. While claiming a respect for local control, the Texas Legislature has launched an assault on Texas municipalities with a slew of restrictive laws meant to rescind progressive ordinances over the past few sessions – without transparently admitting they are targeting cities. Nestled in the political strategizing, Bonnen confirms the long-held suspicion:

“In this office and in the conference room on that end, any mayor, county judge that was dumb ass enough to come meet with me, I told them with great clarity, my goal is for this to be the worst session in the history of the legislature for cities and counties,” says Bonnen.

Rep. Dustin Burrows, R-Lubbock, also present, says he hopes next session is “even worse” for cities to which Bonnen responds, “I'm all for that.”

In a statement following the release, Bonnen heavily downplayed the exchange, writing that it was clear “no laws were broken.”

“This was nothing more than a political discussion – the problem is that I had it with that guy,” he said. “My colleagues have always deserved the facts and context this recording provides, and with clear evidence now disproving allegations of criminal wrongdoing, the House can finally move on.”

The House Democratic Caucus isn’t playing into the sweep-it-under-the rug strategy, releasing a strongly worded statement that calls into question Bonnen’s political fate. Criticizing his “sexist” and “homophobic” comments as “disgraceful and unbefitting of the high office he holds,” Rep. Chris Turner, D-Grand Prairie, said he believes these “revelations are incompatible” with Bonnen serving another term as Speaker. The HDC plan to discuss the situation at a previously-scheduled meeting tomorrow.

“Sadly, this recording confirms Speaker Bonnen has clearly betrayed the trust of many members of the House, which is the most important commodity for any speaker to safeguard,” said Turner. “When a political party has had too much power for too long, it begins to destroy itself from within. Today, the long-standing, deep divisions within the Republican Party in Texas have been laid bare for everyone to see. While Republicans fight with each other, Democrats are united in our efforts to provide affordable health care for all Texans, strengthen public education and act decisively to protect Texans from gun violence.”

A link to the audio can be found on the Texas Scorecard site.

Here's a pdf transcript of the audio to share with your friends. 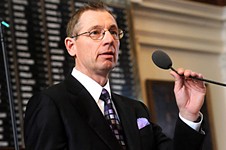