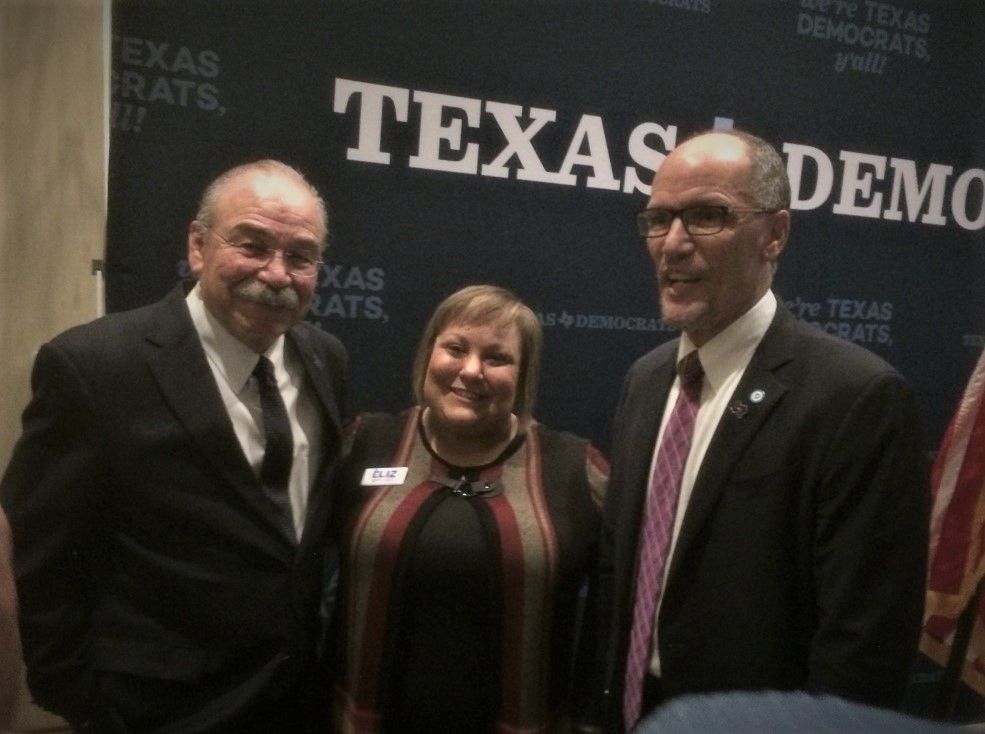 If you had any doubt that Texas is IN PLAY in 2020, let Tom Perez and Gilberto Hinojosa clarify your mind. The chairs of the Democratic National Committee and Texas Democratic Party, respectively, fired up electeds, donors and activists at the TDP’s annual Johnson-Jordan Dinner Saturday night (Oct. 5).

Perez, Hinojosa, and everyone else with a microphone filled the JW Marriott ballroom air with repetitions of now familiar mantras – “the largest battleground state,” “flip the Texas House,” “38 electoral votes,” “not the ATM anymore!” and more. The MC for the event, Fort Bend County Court-at-Law Judge Toni Wallace, observed near evening’s end that if they’d started a drinking game with those phrases, “we’d all be feeling pretty good right now.” (Murmured in the back, in the press row: “We’d all be dead right now.”)

So yes, y’all, this appears to be really happening. When asked point-blank if the DNC lets resources flow to (or stay in) Texas instead of to Ohio or North Carolina or pick-your-purple-state, Perez told reporters, “We’ve already [since 2017, when Perez took the DNC reins] increased our investment here well above what has ever been done before. I think there’s opportunity everywhere here. We weren’t waiting until October 2020 to have an a-ha moment that we might be able to win in Texas.”

Hinojosa added that “We’ve gotten more money from the national party this year than under the last three [DNC chairs] put together.” (Those would be Debbie Wasserman Schulz, Tim Kaine, and Howard Dean.) The TDP chair noted other signs of the DNC’s commitment to the state: the September presidential debate in Houston, the Democratic Congressional Campaign Committee’s opening a full-time office here – its first of the 2020 cycle – and, indeed, a DNC chair attending the TDP’s signature fundraising event “for the first time in memory.”

Inside the ballroom, Perez and everyone else kept the high-roller audience’s eyes on multiple prizes. In descending order of aspiration: The state’s electoral votes would return the White House to the Democrats even if all 49 other states repeated their 2016 results. Then there’s knocking off U.S. Senator John Cornyn with his often-cited 25% approval rating; multiple aspirants in that crowded primary were in the house.

The party faces better odds in contests for up to six more U.S. House seats, where the Red Team was left naked and afraid last November and then abandoned by incumbents in the ensuing “Texodus.” And then there’s the utterly plausible flipping of the nine seats needed to take back the Texas House, last under Democratic control in 2002. Leading that charge from within the chamber, as chair of the party’s legislative campaign committee, is Austin’s own Rep. Celia Israel, who laid out opportunities for progress “that mainstream Texans are hungry for,” including expanding Medicaid, criminal justice reform, online voter registration (her own signature initiative), and most of all a fair redistricting come 2021. “The house must have [a Dem] majority in order to be a counterweight to that dark place called the Texas Senate,” she said, with apologies to the senators (e.g. Kirk Watson, Carol Alvarado) in the room.

One of those nine races is happening right now, a special election in House District 28 in Fort Bend County; the Dem standard-bearer in that race, Eliz Markowitz, got a whoopin’ ovation from the crowd and a bunch of on-the-spot contributions via smartphone (eliz4TX.com, should you want to recreate this feeling at home), including from Perez himself. “This is no longer the Fort Bend County of Tom DeLay,” Israel noted. “Praise Jesus. Praise baby legislative Jesus.”

Other featured Fort Benders, Wallace and District Attorney Brian Middleton, are among the first black Democrats elected countywide in a place with a significant legacy of open and ugly racism; they and other speakers returned to themes of justice and reconciliation throughout the evening. Three faith leaders – reverend, rabbi, imam – read from one another’s scriptures to tacitly remind the crowd which side the Democrats are supposed to be on, and featured speaker Eddie Glaude – professor at Princeton, contributor on MSNBC – sermonized on the moral imperatives of our red and Trumpish moment.

Glaude took care not to grant Democrats automatic absolution of their sins, but he could only avoid saying so much for so long. “If you act like Republicans, it will seal your fate,” he told the crowd. “The other side will speak to people’s fears; you must speak to their needs. … Be more than politicians and those who seek power, [and] help make America anew.”