Nancy Pelosi Brings Down the House at TribFest 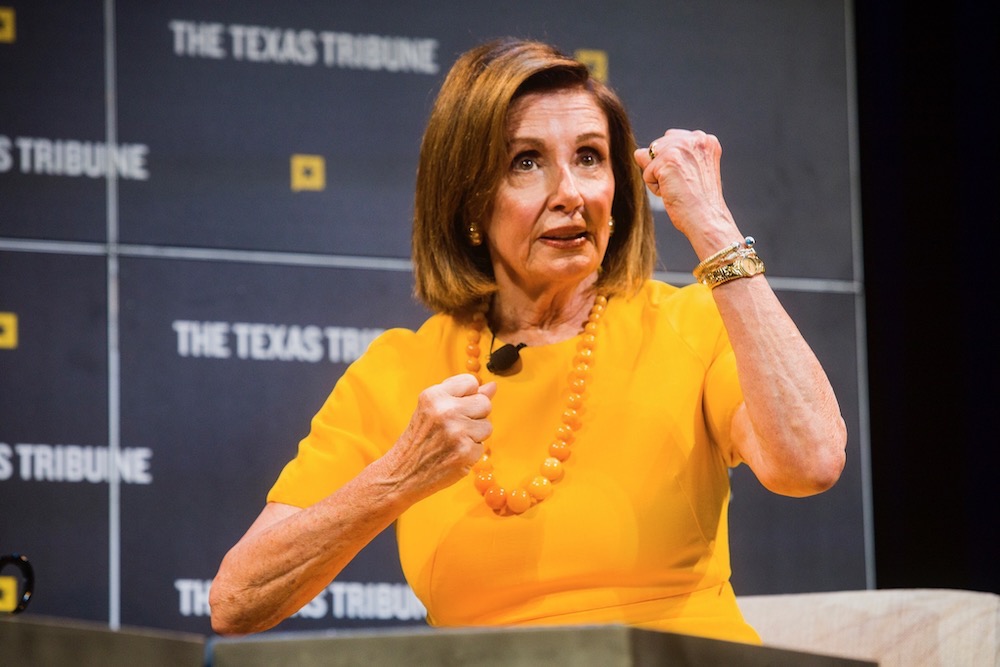 True story! When I was in college, in San Francisco, one of the local congresswomen died – not my rep, but in the next district over – and there was this big, wild special election to replace her.

All the cool kids, me included, were up in arms against our out-of-touch rich lady mayor. Her biggest foe at City Hall - openly gay, openly socialist, a former minister - jumped into the Congressional race, and we were all in with him, newbies on our first big-time campaign. There were 14 candidates total, but it came down to a pitched battle between my guy and this other rich lady from Pacific Heights, who’d never run for office but was well connected in the party, and we were all “Power to the people! Rawr! Take her out!” She won by 3.5 points, and for years - decades! - I held a grudge, and hearing her name made me grumpy.

Thirty-four years later, there I was, sitting awe-struck like all the other fanboys and fangirls and fan-enbies in the crowd in my new hometown, watching this same lady, now old, take her star turn as the savior of American democracy. At least for the moment, as she acknowledged. “The times have found us,” House Speaker Nancy Pelosi told the crowd, quoting the Founders, as she closed out the 2019 Texas Tribune Festival Saturday night, Sept. 28.

Nancy Pelosi was at TribFest last year, but she wasn’t Speaker back then and so her appearance was less inherently dramatic (last year’s closing keynote was Beto O’Rourke, right before his mega-rally at Auditorium Shores). This time, all eyes were on her - in the seats at the Paramount Theatre, in the throngs watching the livestream outside under the tents at TribFest’s Open Congress, and undoubtedly across the nation, in her first lengthy sit-down interview since announcing her support of an impeachment inquiry of President Trump over l’affaire Ukraine and who knows what else.

Pelosi’s own eyes were on the crowd (or at least in our direction; all she could actually see was Willie Nelson in the front row) and not on Texas Tribune CEO Evan Smith, who gamefully played his interrogative role while knowing the speaker would never stray off message, would never make news not of her choosing, and would totally alpha him and everyone else in the room, even the inevitable heckler. (As Smith grew tense during the outburst, Pelosi gave him an Italian-grandmother hand wave - simmer down! - and said “I’m Speaker of the House. I’m used to this.”)

In full boss mode, then, Pelosi aimed to steer the TribFest crowd’s giddiness over a prospective impeachment of President Apeshit into a more reflective and sorrowful place. “"Let us be prayerful. Let us be solemn. Let us try not to make it further divisive," she said. "But we cannot ignore our oath of office to defend the Constitution of the United States from all enemies foreign and domestic." Her job was to keep it real - no timeline for articles of impeachment, let the facts be in charge, let the committees do their jobs, etc. - while still convincing her audience she has indeed gotten over her long-evident reluctance to dispense with Trump by non-electoral means, if need be, saying “In the public, the tide has completely changed.” Is she concerned an impeachment drive might threaten her speakership and Democratic control of the House, Smith asked? Without looking at him or skipping a beat: “It doesn’t matter. ... But I do also think that we will win again with our Democratic majority.”

What does matter, Pelosi argued, are the genuine policy chasms between herself and Trump, and even more so with the GOP in Congress - “They’ve been around longer, and they’ve been worse.” You know the list by now: Support for working families, lowering health care costs, reducing gun violence, taking climate action now, cleaning up the baleful influence of dark money and voter suppression. Her actual legislative positions on these issues are not shared by the left flank of her party, hence the heckling, and some subdued booing in the crowd inside (much less subdued outside) when she described the Green New Deal and Medicare for All as “aspirational.” She is, in many ways, still the Nancy Pelosi who us cool kids tried and failed to beat in 1987.

But now, on a different battlefield, Pelosi is our general and our champion and 100% on board with making Texas “ground zero” of the 2020 election cycle and beyond. “Texas is our hope for the future. I’m not just talking about Democrats, I’m talking about the country and the world. When Texas goes blue, and people have to pay attention to everything that happens here - the views of all the people here - that’s going to be very, very wholesome for our nation. ... When you go out to win, you have to be almost reptilian, cold-blooded about which races you can win, and we think we have many possibilities in Texas to do just that. It’s going to be great.”