Texas Dems Fired Up, Ready to Go in Congressional Races

We still have more than a year to go (!) but for so many Texas Democrats, victory is so close they can also taste it. That's especially true for two congressional candidates – Gina Ortiz Jones and Sri Kulkarni – whose near-misses in 2018 helped provoke the "Texodus" that has given Team Blue so many tempting 2020 targets. 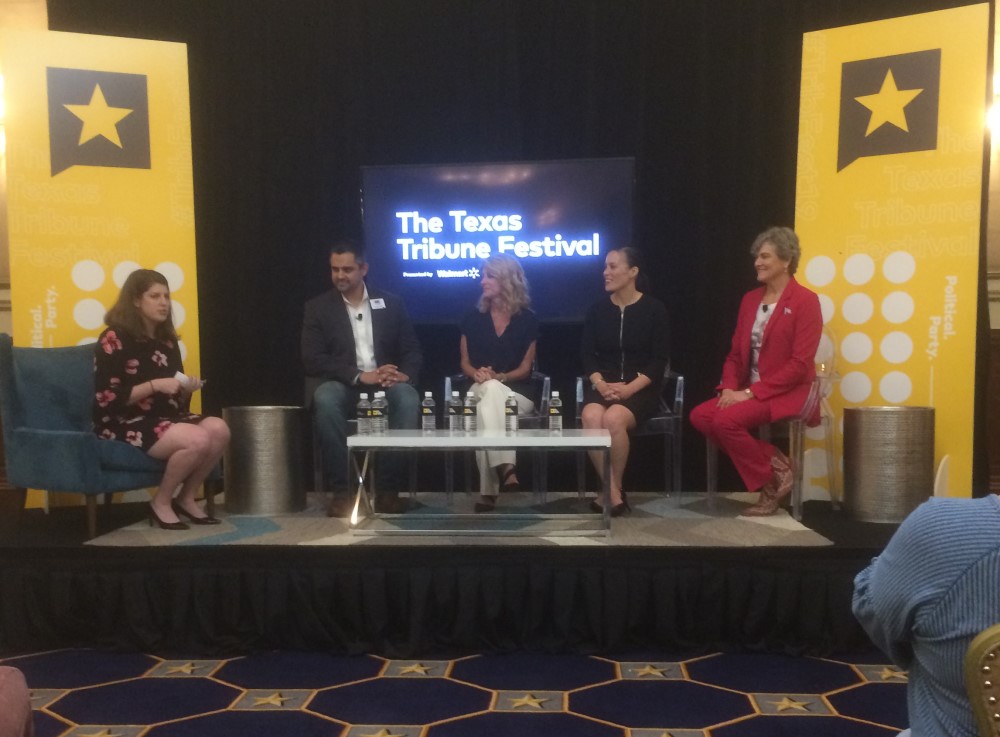 Both Jones of San Antonio and Kulkarni of Houston were on hand at the 2019 Texas Tribune Festival on Friday, joined by Tarrant County's Kim Olson and Austin's adopted favorite daughter Wendy Davis on a panel entitled "The Democratic Do-Over." The latter two, of course, most recently ran statewide, Davis as the 2014 Democratic candidate for governor and Olson in 2018 for Texas agriculture commissioner, where, she noted, she received more votes than any female Democrat in Texas history. All four are now aiming for seats in the U.S. House – conveniently, TX-21 (Davis), TX-22 (Kulkarni), TX-23 (Ortiz Jones), and TX-24 (Olson) – three of which are now open with the announced retirements of U.S. Reps. Pete Olson, R-Sugar Land; Will Hurd, R-Helotes (TribFest's Thursday night keynote speaker – he and Olson faced Ortiz Jones and Kulkarni in 2018, respectively); and Kenny Marchant, R-Coppell. Only Davis, should she prevail in the March primary (as most expect), goes on to face an incumbent, freshman Rep. Chip Roy, R-Dripping Springs, who managed to hold the Hill Country seat vacated by longtime Rep. Lamar Smith.

All the 2018 races in these districts – even Marchant's, which didn't attract the same national attention – were very close calls (Ortiz Jones lost by 921 votes), and these well-funded, high-profile challengers will have the help of the Democratic Congressional Campaign Committee and the eventual 2020 presidential nominee in a year where all signs point to a pitched battle for the Lone Star State. The candidates, naturally, are not at all willing to get even a bit complacent, and dismiss GOP claims that the Dems' 2018 numbers were artificially inflated by support for then-Senate candidate Beto O'Rourke. "The GOP wishes that were so, but they know better. We know better," said Davis. "The reason [Democrats in] this state did so well is because people woke up after 2016 and said 'I’m not going to cede my power to do something to defend my values.' They knew to activate and organize and get things done at the grassroots level. Their lives are on the line" when it comes to the core issues of the party (and all four candidates) – education, gun violence, health care, climate change.

In any event, the momentum that traces back to Betomania (and before that, the other three acknowledged, to Davis' heroics in 2013-14) has already caused to sprout a host of new and re-energized activist efforts – from Battleground Texas to Jolt to Texas Rising – that are both increasing and sustaining the blue wave. "We're building on so much progress that's already been made," said Ortiz Jones – who, many remember, did not get much help from Beto last year, due to his friendship with Hurd.

Kulkarni said, "Beto's a friend, but this is a team sport." While O'Rourke has been on the presidential trail, Kulkarni's rolling campaign is already scoring wins in the Houston suburbs. "We had 10 people from my campaign who ran for office this year; I walked for them as they ran for city councils and school boards." Both Kulkarni and Olson noted that even since 2018, the demographics of their fast-growing and extremely diverse districts are on the move, with thousands of new voters who can close the gaps from last cycle. (In her ag commish race against actual clown Sid Miller, Olson carried TX-24 by two points.) "We can flip this state," said Kulkarni, "with the hard work of the people in this room." (It was definitely that kind of room.) "And if we flip Texas, we flip the country." Olson noted they would also flip the Texas House – half of the state party's targets are seats that overlap TX-24 – and told the audience that if she won and those down-ballot candidates didn't, she'd consider her race a failure.

While the Dems were happy to talk about their core issues – the ones that pundits and D.C. leaders putatively worry will be drowned out by impeachment – all but Davis come from national security and military backgrounds, so they were quite comfortable taking the righteous high road in support of an inquiry, even while seeking to take the temperature of their still nominally purple districts. "This isn’t what people in our district are talking about," said Kulkarni, a career Foreign Service officer who resigned his post in protest after Charlottesville, before entering the TX-22 race. "Everybody has a health care story. Everyone in Houston has been affected by climate change. Everyone is afraid of gun violence. But these concepts" – referring to the rule of law and Constitutional protections – "are what hold the country together, and it’s an affront, a slap in the face to everyone who’s worn a uniform for [a president] to not take national security seriously."