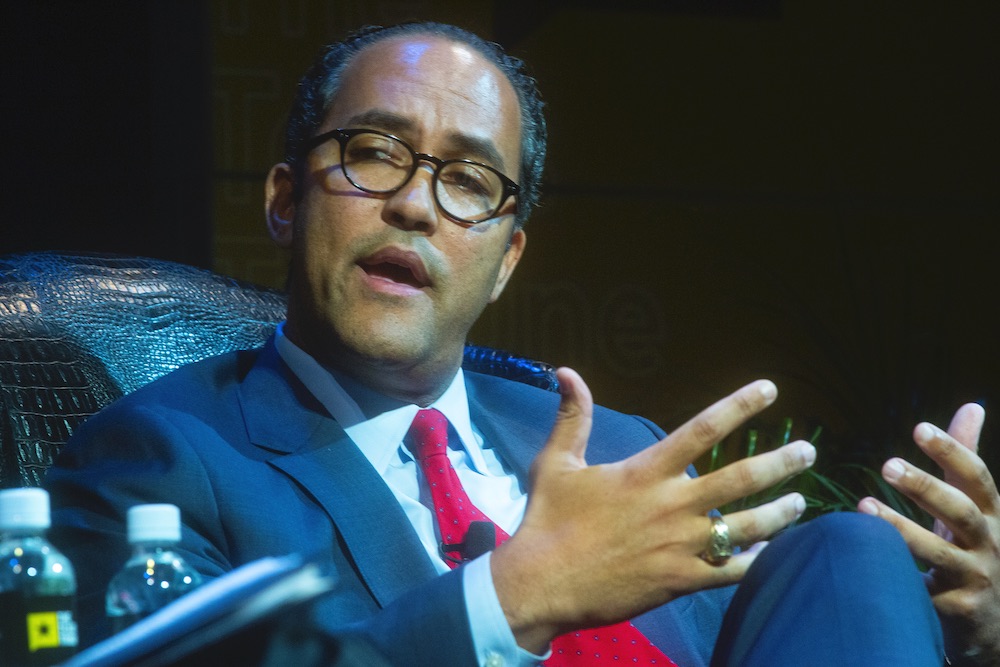 U.S. Rep Will Hurd, R-Helotes – whose decision to not run for re-election kicked off a "Texodus" of GOP incumbents that may not be over yet – distanced himself from his president and kept his own political options wide open as he opened the 2019 Texas Tribune Festival.

In conversation with Texas Tribune CEO Evan Smith in front of a packed Paramount Theatre crowd, the affable 42-year-old ex-CIA agent who's spent three terms as the only black Republican in the U.S. House of Representatives insisted that he could have won a 2020 rematch with Democrat Gina Ortiz Jones, even after only eking out a 921-vote victory in 2018 in TX-23, which stretches from San Antonio to El Paso and went for Hillary Clinton in 2016. Hurd also argued that "the right Republican" could do the job in his stead, but was not so rosy about his party's overall path forward: "Texas is a jump ball. Texas is purple," he said. "Just because we don't have a statewide elected Democrat doesn't mean a Democrat can't win the state."

Hurd noted that the Texas GOP's most reliable base voters - those with extensive history voting in the primaries - turned out in record numbers in 2018, "and look what happened." He, on the other hand, claimed success with the higher-opportunity voting demographics in Texas: people of color, voters under 30, and college-educated suburban women. His party, he fears, "has an overwhelming focus on a shrinking base ... If the Republican Party doesn't start looking like America, there won't be a Republican Party in America."

That angst is clearly becoming more pronounced as the leader of that party, and his administration, continue their daily dive into what is looking more and more like an unrecoverable death spiral. As Hurd has become one of a handful of House Republicans willing to turn his back to Trump on issues from gun violence to the border wall, he said the president's language – particularly when it comes to white ethnocentrism – "needs to be reformed and changed. But I've learned that most people don't change."

In contrast, Hurd holds himself up as a model of a compassionate consensus builder, working by necessity to find common ground in one of the nation's few true swing districts; he pointed directly to a need for redistricting reform so that there are more such districts, with more accountability to more voters beyond the partisan bases, to "get better people running for office." (One of those people, he says, is Wesley Hunt in Houston, the leading GOP candidate at the moment to take back the TX-7 seat won by Democrat Lizzie Fletcher last November.)

As for the issue of the day, Hurd - who sits on the House Intelligence Committee and took part in its hearing earlier Thursday on l'affaire Ukraine – said the whistleblower complaint includes "a lot of disturbing allegations," and that contrary to Trump's thuggish call for vengeance "in front of a bunch of diplomats ... we should be trying to ensure that we never know the name of the whistleblower." However, impeachment talk is premature, Hurd told a crowd who likely felt otherwise. "Everybody's getting wrapped around the axle - this isn't like kicking somebody off Survivor." (Or, in an earlier reality-TV simile, "like the 12th episode of 'The Apprentice.') "These are very serious allegations that need to be investigated."

At the same time, looking toward his future, Hurd said "Congress is not the only place to get things done." When talking about issues such as health care or guns, Hurd made clear his politics remain to the right of the TribFest crowd, but acknowledged "My district would benefit from an expansion of Medicaid" and gave a shout-out to Moms Demand Action, and not the National Rifle Association, as "good about articulating concerns at a local level, in Texas and across the country." He said his near-term efforts would be on helping "build the Republican Party of the future, one that people who look and act like me can be proud of."

Would that include, or preclude, a rumored post-Trump 2024 presidential bid, Smith asked? "If my issues still aren’t being addressed, if I’m the only person still talking about this, I will think about it," he said. "I’m focused on taking this message to different parts of the state and the country. I’m 42 years old. I never take opportunities off the table."