On Friday, a thousand or more people gathered at the Capitol to add their presence and voices to the worldwide “Climate Strike” – an international effort to call attention to the growing crisis of global warming and to press public officials to take preventive action. 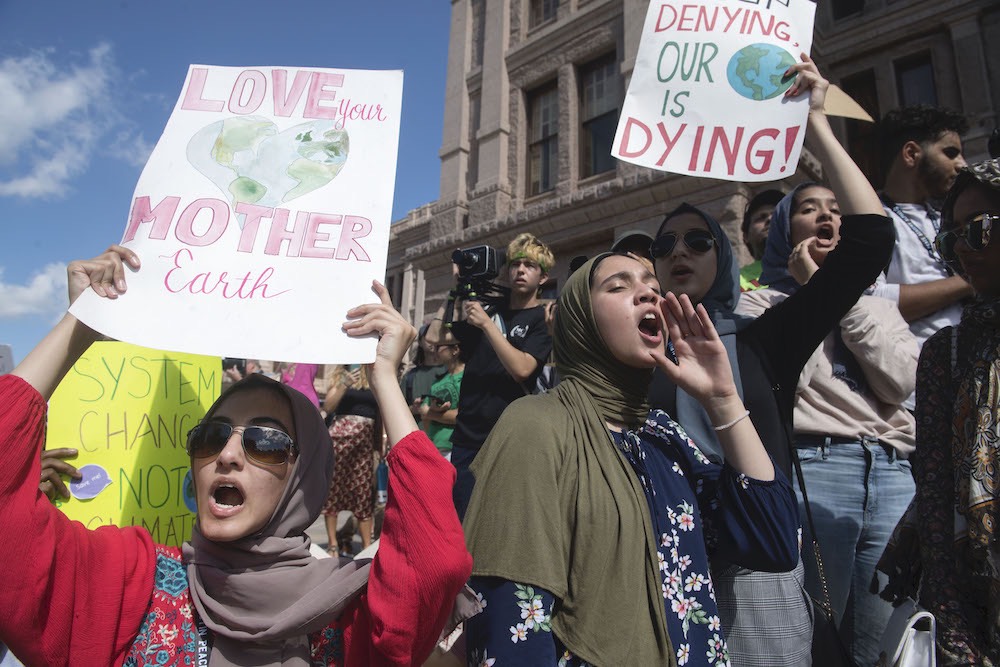 Sounding chants of “We want a future!” among other enthusiastic sentiments, the rally was organized and led by students from various Austin high schools, and amplified by hundreds of people of all ages who gathered for several hours in the belated September heat. The event provided a local and Texas focus to the worldwide "strike” – a call to end business as usual and to devote sufficient public resources to addressing the climate crisis.

Students, representatives of various environmental activist groups, and elected officials spoke briefly in turn about the nature of the climate challenge and its political aspects – pressuring or replacing officials who deny the science or refuse to act. Student organizer Emma Galbraith (Austin High), gesturing behind her to the Capitol, noted that the incumbent representatives “can just as easily be replaced” if enough people begin to understand what is needed, and to vote accordingly.

“Our government is failing us,” Galbraith said, and she emphasized that “lifestyle changes are not the answer.” She said that just 100 companies — primarily fossil fuels companies – are responsible for more than three-quarters of carbon emissions, and certain banks (i.e., Chase) provide the lion’s share of investments in fossil fuels. That should create specific pressure points for environmental action to alter corporate behavior.

Galbraith listed the five demands of the organizers, for the city and the state: 1) that Austin divest of fossil fuel investments by 2030; 2) that the Fayette Coal Plant be finally closed by Austin Energy and the LCRA (which share ownership); 3) that the state declare “a climate emergency plan with real teeth”; 4) that Austin Energy end coal and natural gas use by 2025 and provide “just transitions” for workers to renewable energy jobs; 5) that Texas move to 100% renewables by 2050.

Those demands are not on equal footing – the city has been moving in those directions for some years, while Republican state leadership continues to ignore climate science and oppose any moves to diminish the use of fossil fuels. (Indeed, with the advent of fracking, West Texas production and exporting has boomed.) But the students say they will persist in their fight, pointing to the 2020 elections as a watershed for changing the state’s political and environmental trajectory.

All spoke of the urgency of acting against climate change now, and of the political necessity of popular organizing to sustain the effort. Locally, the organizers hope to build the Austin Climate Coalition – next meeting Saturday, Sept. 29, at the Sierra Club (6406 I35N) – into a broad-based organization for change. Worldwide, the estimates were that some 4 million people participated in climate strike events, with 100,000 crowd estimates in Berlin, London, and Melbourne.

“You had a future,” the young people chanted. “So should we!”