What Austin Can Learn From Other Cities

“Nothing is more contentious than land use,” Marilyn Strickland, President/CEO of the Seattle Chamber of Commerce told a crowded room Thursday, Sept. 12, during a panel discussion on what Austin can learn from other cities at this year’s Real Estate Council of Austin’s RECA Exchange.

Strickland was joined by Matt Wiltshire, of Nashville’s Development and Housing Agency, and President/CEO of the Minneapolis Chamber of Commerce Jonathan Weinhagen to discuss city issues from land use to homelessness. Steven Pedigo, director of UT-Austin’s LBJ Urban Lab, moderated.

With Austin readying for the October 4 unveiling of what’s likely to be the city’s new land development code – a year after CodeNEXT, failing to be adopted by City Council, was put to pasture – the conversation began with land use. Minneapolis, becoming the largest city in American to do so, recently eliminated single family zoning throughout the city, a tactic more cities are considering in order to provide more housing. (As Pedigo noted, Oregon removed single family zoning throughout the state.) Weinhagen described the elimination as part of Minneapolis’s “pro-growth, pro-development” 2040 comprehensive plan, which the city hopes will help tackle affordability. “It did not happen overnight,” added Weinhagen, who noted both sides of the argument had mixed reviews, “and it didn’t happen without some battle scars.”

Addressing concerns many Austinites voiced about CodeNEXT, Weinhagen said that, despite the removal of single family, the market – he believes – “isn’t going to allow for the tear down of a half-million dollar home to build a two million dollar triplex; the pro forma on that doesn’t work.” Instead the city anticipates greater development on corridors. (Density along transit corridors is also included in Imagine Austin, our 30-year comprehensive plan.)

Seattle is going through similar growing pains. With 65% of the city zoned for single family housing, Strickland said “a whole swath of opportunity” is “eliminated” when it comes to building more affordable housing. To address this, Seattle recently passed Mandatory Housing Affordability, which requires 10% of whatever’s built to be allocated for low-income housing or the contribution to a housing fund. But, she added, only 6% or less of the neighborhoods now zoned single family may be subject to MHA.

Public engagement was a common thread throughout the conversation. Wiltshire said working with low-income residents helped Nashville better commit to its current goal: Building 10,000 new housing units across a variety of price points, which Wiltshire called “by far the largest experiment in creating mixed income housing” in the city’s history. While it’ll take “some time” to achieve, Wiltshire said the early results have been “quite promising.”

Strickland credited a dedicated team of employees’ commitment to community engagement for the passage of Seattle’s $53 billion Sound Transit 3 measure in 2016. “You have to help people understand the vision,” she said, noting that residents came around to the bill as traffic grew progressively worse. Now the city is working on building 123 new transit stations.

Despite the 2016 Mobility Bond’s passage, Austin has struggled to obtain voter approval for mass transit, with plans being defeated in 2000 and again in 2014. For Seattle, passing the 2016 measure – the city’s third major investment in transit – was “easier,” said Strickland, because residents could “see the first [measures from 2008 and 1996] working.”

Though panelists discussed the country’s homelessness crisis, no city has achieved a permanent solution. Weinhagen discussed Minneapolis’ temporary navigation center and credited the business sector for its support, while Strickland said the issue of getting folks off the streets and, for many, the medical help they need requires federal and state intervention, noting “homelessness is a symptom, not the problem.” 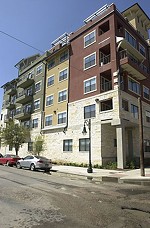