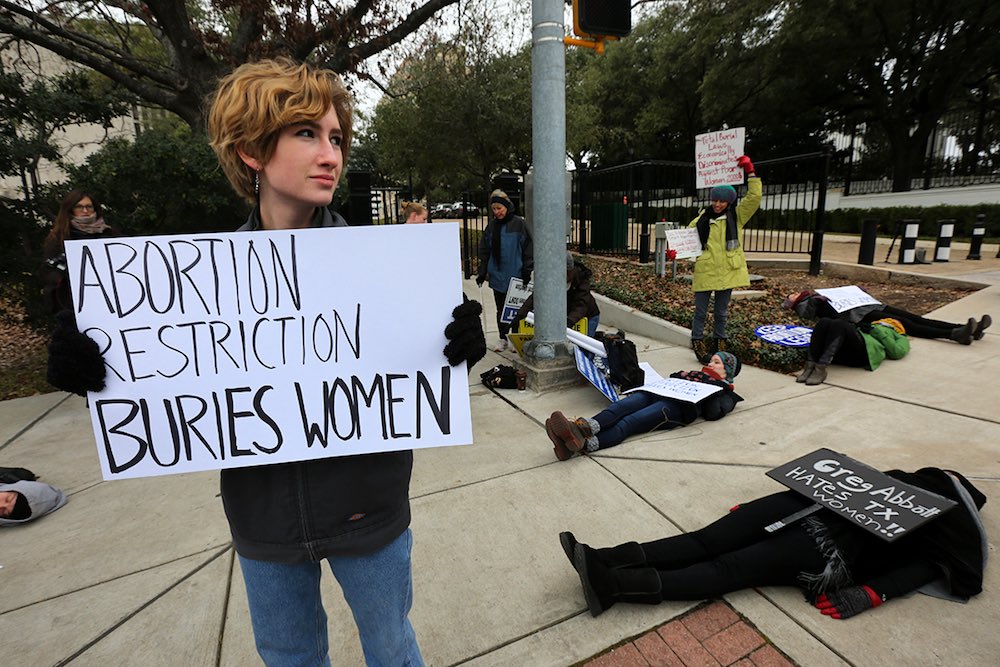 Women participated in a "die-in" in January of 2016 to protest new state rules requiring health care facilities that perform abortions to bury or cremate the fetal remains. (Photo by Jana Birchum)

The plaintiffs, represented by the Center for Reproductive Rights, the Lawyering Project, and law firm Morrison & Foerster LLP, have prevailed in the federal courts up until now, as the state of Texas seeks to reinstate its law requiring healthcare facilities to dispose of aborted, miscarried, or ectopic embryonic and fetal remains through burial or cremation – regardless of the mother’s wishes, personal beliefs, or ability to pay for such services.

This is Texas’ third attempt at establishing standards for fetal tissue disposal that are outside of conventional medical practice, serve no public health benefit, but are nonetheless fiercely championed by anti-choice advocates. Senate Bill 8 was blocked before taking effect by U.S. District Judge David Ezra on the grounds that it “imposes an undue burden” on women’s constitutionally protected right to abortion (the standard established by the U.S. Supreme Court’s 1992 ruling in Planned Parenthood v. Casey) by overlooking women’s personal beliefs and laying the groundwork for further stigmatization.

Caroline Sacerdote, staff attorney for the Center for Reproductive Rights, commented, “I think we made really strong arguments about how this law takes away the choices of Texans. It is Texas once again attacking the autonomy and dignity of women with a law that has nothing to do with public health.” In addition to the sanctimonious infliction of shame upon Texas women, this law also prescribes impractical requirements for burial and cremation methods; Sacerdote notes Ezra had “found that there is no reliable method for clinics to comply with this law.”

Attorney General Ken Paxton, an enthusiastic proponent of the anti-choice movement, dismissed the opposition of the Texas Medical Association, Texas Hospital Association, and American College of Obstetricians and Gynecologists. Said the AG, “The requirement to treat the remains of unborn children with dignity and respect would do nothing to affect the availability of abortion in Texas. So why does the abortion industry object so strenuously? The unpleasant answer is that it will go to any lengths to obscure this fundamental reality: the child in the womb is a human being. But given the Supreme Court’s guidance on this very issue and the persuasive case made in the courtroom today, I’m confident that we will prevail.”

SCOTUS, in a controversial ruling earlier this year, allowed Indiana to require the burial of fetal remains, among other restrictions favored by anti-choice campaigners. According to Sacerdote, the country has seen over 400 restrictions on abortion passed at the state level since 2010, calling it a “ramp-up” from previous years.