The presidential hopeful stayed on message, called for change 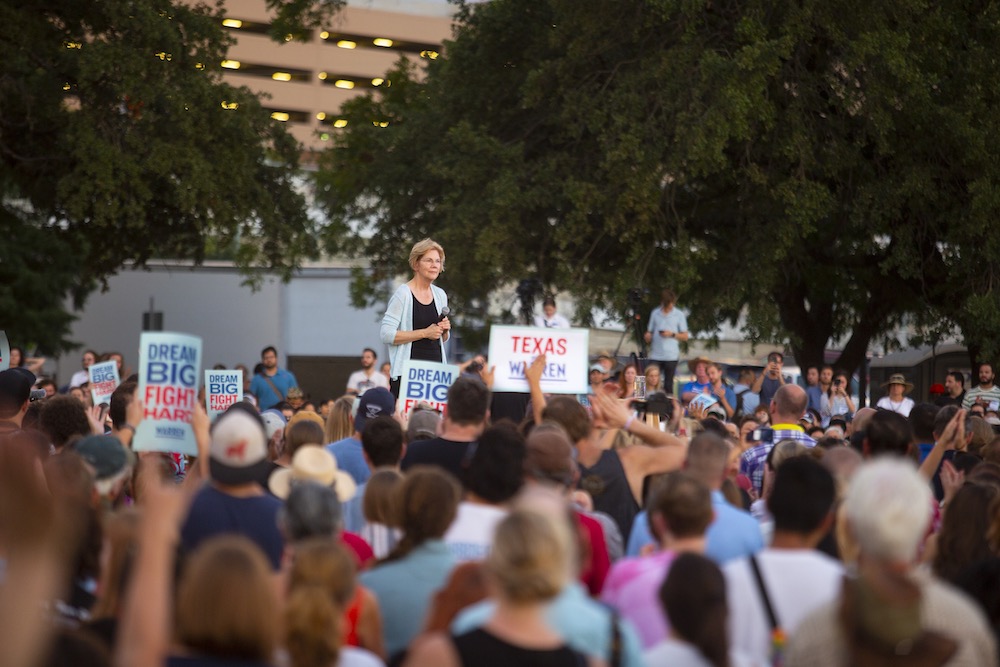 Sen. Elizabeth Warren tells Austinites "This is our moment in American history.” (Photo by Jana Birchum)

An afternoon of overcast skies and intermittent rain gave way to a sunny summer evening, and a double rainbow over Auditorium Shores welcomed Sen. Elizabeth Warren, D-Mass., to the stage in Downtown Austin on Tuesday, Sept. 10.

Two days ahead of the third Democratic presidential primary debate in Houston, Warren, who's become one of the top 2020 contenders, stopped by to rally her supporters in the Texas capital. Despite the weather, which briefly forced volunteers to evacuate attendees from the area and delayed the start time by almost an hour, the campaign said the crowd of supporters was more than 5,000 strong.

The event, dubbed a “town hall” because it featured a raffle allowing three attendees the chance to ask questions, was the 130th of its kind, Warren proudly announced. In a tight stump speech, Warren stayed on message and hit familiar beats, recounting her own biography, calling out the corrupting influence of money in Washington, and pitching her 2% wealth tax.

Warren was introduced by Jessica Cisneros, a progressive challenging moderate U.S. Rep. Henry Cuellar, D-Laredo, in Texas’ 28th district, which stretches from the border to the San Antonio suburbs. (Warren endorsed Cisneros, an immigration attorney from Laredo, on Monday.) In her introduction, Cisneros echoed Warren’s accusations of corporate corruption in politics, and called her opponent, first elected in 2004, “Trump’s favorite Democrat.”

“I am very honored that Sen. Warren recognized that fighting spirit within me and in all of the people down in South Texas that are creating the movement that we are all so proud to have down here,” Cisneros said. “I am very happy to share the stage with someone who’s fighting to protect and help our working families.”

The senator responded with a promise: “TX-28, we’re gonna get this done.” Of Cisneros, Warren said: “Here’s a woman that believes that government in Texas, and government all across America, should not just work for a thin slice at the top. It ought to work for everyone. And we’re gonna be here for her.”

Warren, an Oklahoma native who attended the University of Houston as an undergraduate and taught at the University of Texas at Austin prior to launching her political career, recalled her Southwestern roots, noting, “I’ve been coming to Austin since I was a little girl. So you know this is really family for me.”

Warren lingered on that concept of family, shifting from her jovial introduction to a quietly emotional account of growing up in a working class family and of the financial anxiety that defined her childhood after her father was incapacitated by a heart attack. The full-time minimum wage job that her mother worked saved their family, Warren said, but wouldn’t be able to keep a family of three out of poverty today. She pointed to the influence of money and corporate interests in Washington as the root of this change.

The senator then shifted to a comprehensive overview of her platform, hitting many of the same points made during the first two Democratic debates. She laid out her plans for fighting corruption, funding vast public programs – including universal childcare and universal higher education – with a 2% wealth tax, and safeguarding the democratic process against voter suppression. 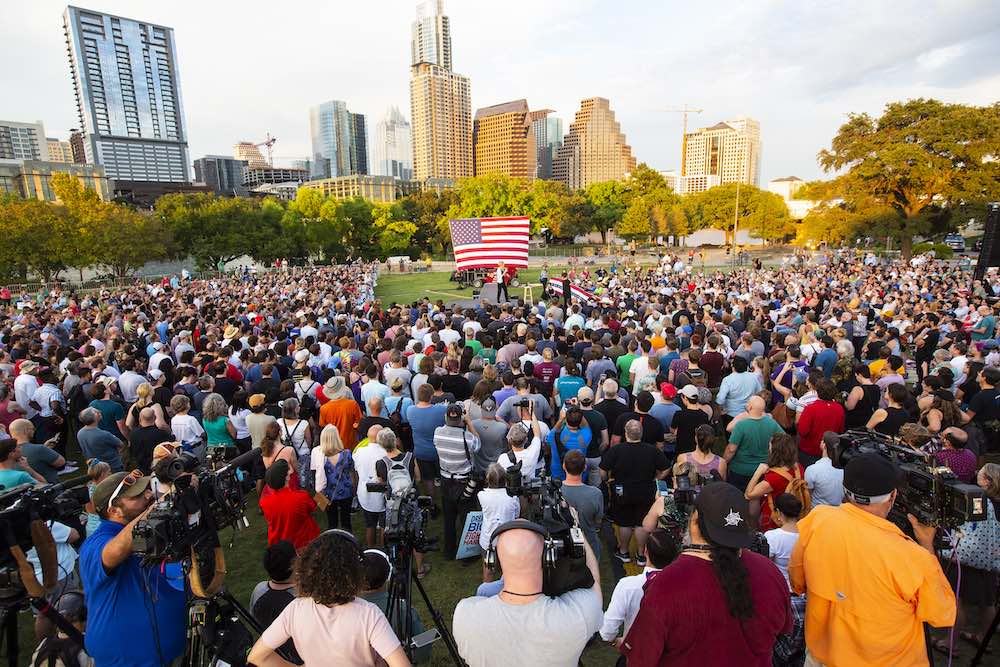 The presidential hopeful addressed a crowd of more than 5,000 supporters (Photo by Jana Birchum)

At the end of the night, Warren took the questions of the three attendees who held winning tickets. The senator stayed consistently on her message with each answer, aligning them with her proposals for a wealth tax and green manufacturing. She closed by recalling the obstacles faced by activists and civil rights leaders from the women’s suffrage movement to the LBGTQ rights movement.

A University of Texas/Texas Tribune poll that dropped later Tuesday night showed Warren – one of ten Democratic candidates to qualify for the Sept. 12 primary debate – pulling into second place in the Lone Star State, now ahead of local darling Beto O’Rourke. The senator polled at 18% among Texas Democratic voters, up from 14% in June, while O’Rourke, the former congressman from El Paso, is down one point to come in third at 14%. The Texas primary is still being led by former Vice President Joe Biden (26%). Nationally, Warren is consistently polling in the top three, behind Biden and neck-to-neck with fellow progressive Sen. Bernie Sanders, D-Vt.