On Thursday, Travis County received word that the Texas Indigent Defense Commission has approved a four-year grant of matching funds to support creation of a Public Defenders Office, and additional support for the existing Capital Area Private Defenders Service. An April forum on Indigent Defense, at the Carver Center (Photo by Michael King)

Pending expected Commissioners Court approval at next Tuesday’s meeting, the grant would begin in April of next year. Once in place, the PDO would end Austin’s status as the largest city in the country without public defenders, who specialize in representing indigent defendants. The hope is that the new office, in combination with additional resources for the private attorneys currently assigned by the courts to represent poor clients, will mean better and more equitable representation in criminal cases. As envisioned by the planning groups and the grant proposal, public defenders will eventually represent 30% of indigent felony and misdemeanor cases, with the remaining 70% assigned to CAPDS.

Travis County had originally requested a five-year grant totaling $27 million, revised in late July to $24.6 million in state funds, $23.6 million in county funds ($48.3 total, over five fiscal years). TIDC’s approval reduces the grant period to the agency’s standard four years, and – as described in documents prepared for the commissioners – will begin in April, 2020, conclude in April, 2024, and total $20.1 million in state funds to match Travis County’s $20.1 million.

The much-welcomed grant will nonetheless leave the county with additional, growing criminal justice expenses: "The total county contribution for the grant match, plus non-grant eligible expenses, including the increase for civil attorney hourly rates," according to the staff summary, "totals $32.3 million." Once the grant expires, the country will be expected to continue underwriting the new system on its own.

While Travis County had hoped to begin hiring for the new office this fall, that process is delayed until April, as is additional staff hiring for CAPDS. Still unresolved is an ongoing disagreement among stakeholders – especially reform advocates and the county judges – over the oversight system for the PDO. [MK Update 5pm: It turns out the Commissioners have indeed settled on an appointed oversight committee, including a range of attorneys, judicial representatives, and community members. More on that next week.] See “In Search of Greater Justice …,” May 24.

For more on this developing story, follow the Daily News and the Chronicle print editions. 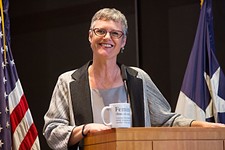