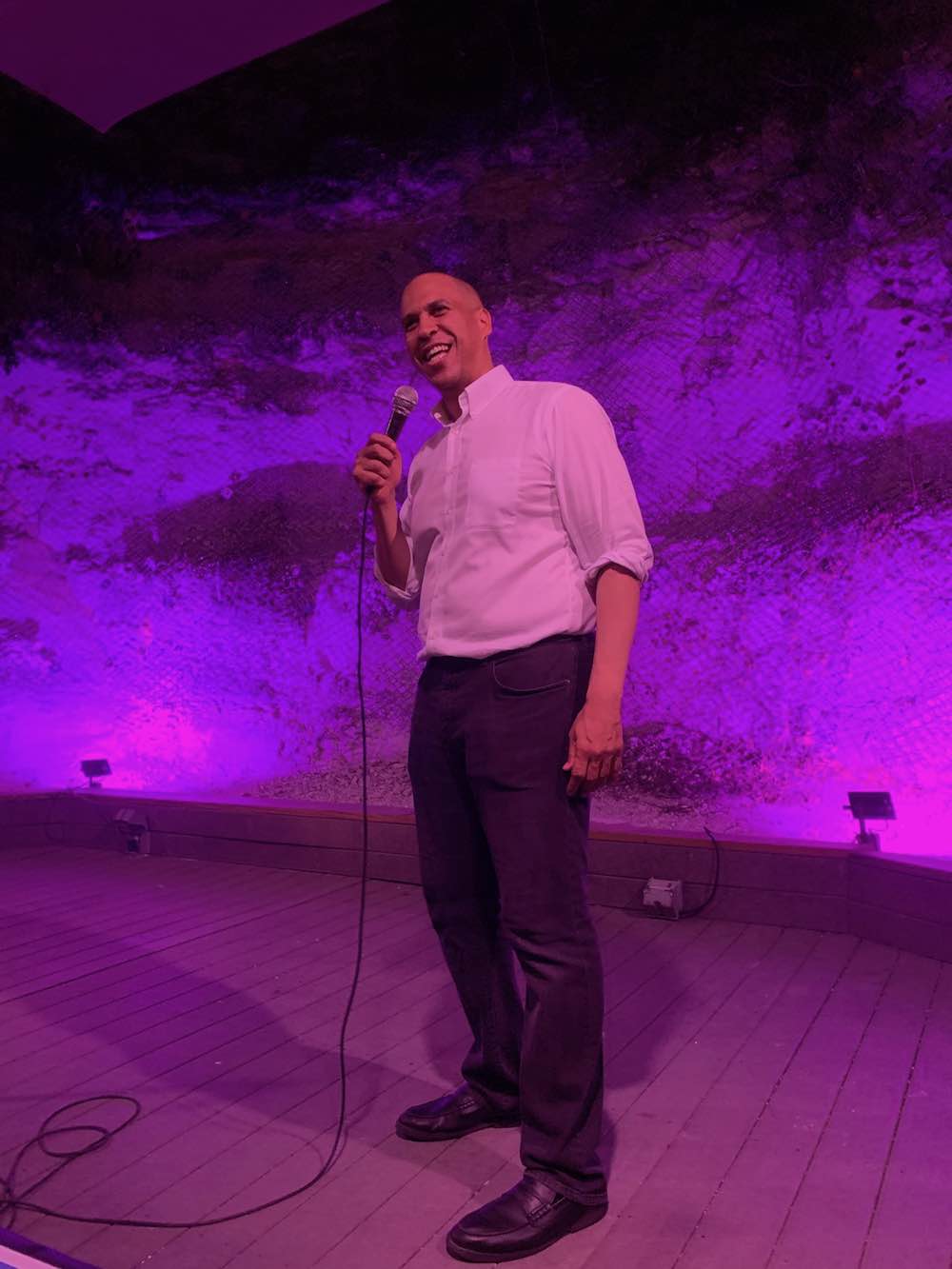 It was the New Jersey senator’s first visit to Austin as a presidential candidate, and his latest since delivering the keynote address at the Texas Democratic Party’s annual Johnson-Jordan dinner last September.

The candidate was introduced by Dyana Limon-Mercado, the chair of the Travis County Democratic Party, who noted that she couldn’t endorse any particular candidate but praised Booker’s platform.

“One of the things I appreciate most about Sen. Booker is that he was paying attention to Texas when a lot of other people weren’t,” Limon-Mercado said. “He was here over a year ago rallying with Texas Democrats, he was here years ago investigating for-profit prisons in West Texas, and it says a lot to me about what people are doing when nobody’s looking.”

Booker bounded onto stage a little after 9pm with his usual larger-than-life ebullience and immediately established that this would be a night, and a campaign, defined by lofty moral aspirations over policy plans — though the senator confessed to being “a big overgrown geek nerd when it comes to policy.” After racing through the bullet points of his platform, touching on everything from housing policy to agricultural policy to health care in about a minute, Booker turned his attention to what he called the “moral moment” we find ourselves in.

“This is an important election to speak to our head,” Booker said. “But I also think this has got to be an election that speaks to the gut, speaks to the heart, speaks to the soul of our country. Because I worry that something is happening now that really just makes me, I have to say, plain angry. You see, we used to come from a nation where we didn't see the kind of impotency of empathy that we're seeing right now…. But now we're at this moment in America where we see people killed in a Walmart in El Paso, and we do nothing.”

Booker, whose campaign has emphasized criminal justice reform and gun violence, rooted his sweeping, semi-sermonic monologue in an appeal to love — which he cautioned us not to mistake for “sentimentality.”

“Love is urgency, love is demanding, love is sacrifice,” Booker said. “Love is struggle, and we know if there is no struggle there will be no progress.”

The senator dwelled at length on his personal and family history, and on the interrelated history of American civil rights movements. He discussed his parents’ struggle with housing discrimination in New Jersey, and praised the decency of white volunteers who helped them outsmart racist real estate agents. He recalled his own experiences with gun violence while living in a low-income neighborhood in Newark, describing in jarring detail the gruesome death of a black boy on his block that left a young Booker blood-stained and traumatized. Following the shooting, Booker said, a local woman he’d grown close to offered two words to him that continue to define his empathetic, vaguely spiritual quest for the White House: “Stay faithful.”

“I’m telling you right now that that’s where we are,” Booker said. “What is the quality of our faith in each other? What is the depth of our love for one another? How will, in this moral moment, we show the truth of who we are? Because we have come this far by faith.”

Continually, Booker invoked civil rights leaders of the past, quoting Martin Luther King, Jr. and frequently emulating King’s righteousness and religious motifs, touched perhaps in places by some of the moral panic of James Baldwin. At one climactic moment near the end of his speech, the senator borrowed King’s notion that “we are called to go to the mountaintop.” He referenced women’s suffrage, McCarthyism, antisemitism, the anti-immigrant Know Nothing party of the mid-1800s, and police brutality along the Selma to Montgomery march.

“How did we beat them in the past?” Booker said. “Did we beat Bull Connor in Birmingham by bringing bigger dogs and bigger fire hoses? No. We beat him by artists of activism who called to the conscience of our country, who awoke the moral imagination of a nation.”

Bringing his case for active, grassroots civic organizing to Austin’s turf, Booker promised that as nominee, he would help organize in Texas to win the 2020 Senate race against John Cornyn. “We gotta get some folk woke, get them to understand the urgency,” Booker said. “Because I'm going to tell you something you already know: Texas is a blue state, y’all.”

Booker will be back in Texas on September 12 for the third Democratic primary debate, set to take place in Houston. He is one of ten Democratic candidates to qualify for the latest round of presidential debates, but has struggled to break out of low single-digit polling numbers despite his oratorical gifts and relatively strong performance in previous debates. Booker makes a compelling case for the moment we find ourselves in, but flanked by more progressive candidates to his left and by former Vice President Joe Biden’s own brand of nostalgic center-left sentimentality, the New Jersey senator faces an uphill battle to the mountaintop.