A “historic commitment to achieving the moral imperative” of ending homelessness tops the list of highlights of the newly proposed Fiscal Year 2019-20 Austin city budget. 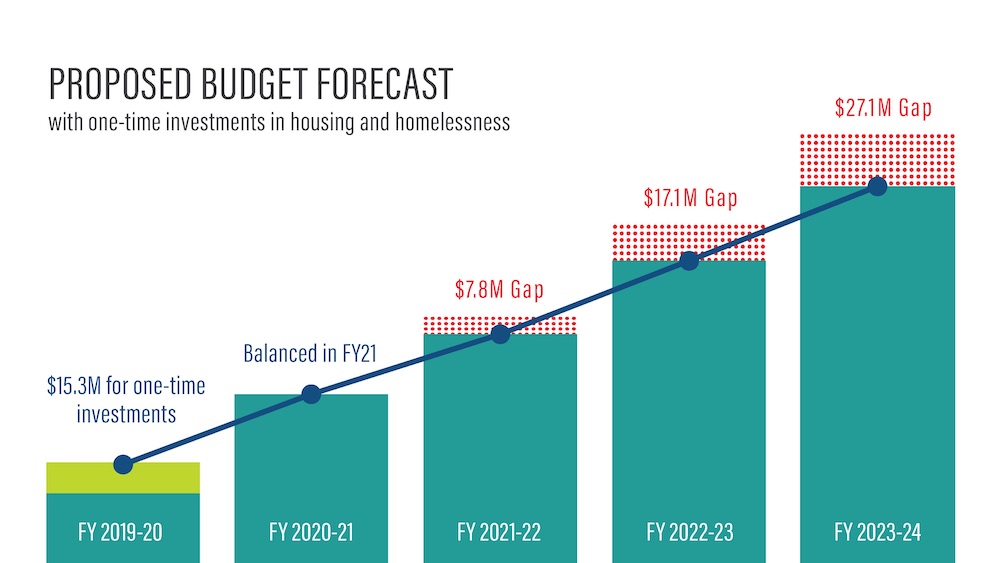 The city’s $4.2 billion spending plan was presented this afternoon to City Council by City Manager Spencer Cronk at the East Austin headquarters of LifeWorks – the leader of local efforts to end youth homelessness. They're one of the city’s many partners in addressing the crisis with what, next year, will be a $62.7 million investment – $17 million more than this year, and three times what the city spent when Mayor Steve Adler took office in 2015.

Cronk’s budget hits that high spending mark with the help of $15.3 million in one-time expenditures, using the funds garnered by setting the property tax rate to achieve 8% revenue growth, the most allowed by state law without holding an election (the “rollback rate”). Next year, Texas’ new revenue caps lower that number to 3.5%. Going to rollback now allows Cronk, city budget officer Ed Van Eenoo, and their teams to produce balanced budgets both this fiscal year and next.

It also gives them time to work with Council, the city’s General Fund departments (supported by property tax), and you and me to have the proverbial “difficult conversations” about future spending. “State leadership and the Legislature have made this kind of budget very difficult in the future,” Adler said in a statement released after the presentation. “We have a year to figure this out.”

Van Eenoo projects the city’s baked-in cost drivers – wages and benefits (including for retirees), new facilities approved by voters, and planned increases in public safety staffing – amount to a 3.8% annual increase. Meanwhile, the growth in General Fund revenue – which includes sales taxes, fees, transfers from Austin Energy and Austin Water, as well as property tax – is likely to be below 3.5%, leading to a projected $27.1 million gap by FY 2024.

This year's proposed budget would lead to a 2.5% increase in the typical Austin homeowner’s tax bill, or just under $100 a year – Cronk’s budget holds electric, water, resource recovery, transportation and drainage fees steady. The actual tax rate of 43.86 cents per $100 assessed value is lower than this year’s, as per usual, due to the growth-driven swelling of the city’s tax roll. The budget supports a 2.5% pay increase for city employees (less for public safety personnel as established in their contracts) with no hikes in health care costs.

New ongoing spending includes 30 new police officers, the $15 million Del Valle fire station and its crew, and other new and rebooted facilities such as the Montopolis Rec Center. Cronk’s also made targeted outlays that show he’s been listening to his Council, with new funds for “creative spaces,” Vision Zero, police oversight, equity mini-grants, curbside composting, climate resilience, swimming pools, DNA evidence processing, and much more. Adler acknowledged these steps, saying “It is readily apparent the degree to which you have reflected our priorities.”

The total homelessness package aims to prevent housing displacement, to mitigate the crisis on the streets with shelter and services, and to re-empower people as they exit homelessness. The one-time $15.3 million investment, Cronk said, will include an infusion into the Housing Trust Fund; increasing rental assistance and legal aid; fully funding (for five years) the city’s Pay for Success reimbursements to private civic entrepreneurs delivering services; repairs and upgrades to the Austin Resource Center for the Homeless; and $1.5 million to the Salvation Army to kick-start its fundraising to open its new Rathgeber Center family shelter. Cronk’s also setting $1.5 million aside for the solutions he’s bringing back to Council later this month for the “public encampment question” – safe camping spaces, safe parking lots, etc.

Council's first scheduled budget hearing will be Aug. 20, with several planned before the scheduled adoption on Sept. 10. The full budget document, should you wish to explore its 800-plus pages, is available here.