As expected, Erin Martinson announced this week that she is entering the 2020 Democratic primary race for Travis County District Attorney, joining José Garza – who announced his run in early June – as challenger to incumbent D.A. Margaret Moore.

At her campaign kickoff Tuesday evening, hosted at a private home in Hyde Park, Martinson, until recently the managing attorney for Advocates of Victims of Crime at the Texas Legal Services Center, cited what she called Travis County’s “lack of prosecutorial leadership around sexual assault cases” as her primary motivation in challenging Moore. She said advocates on the issue had begun encouraging her to run about a year ago, and while initially reluctant, she said she has “reached the point of exhaustion and heartache” and decided that running for D.A. is the best way to pursue the fight for better justice. 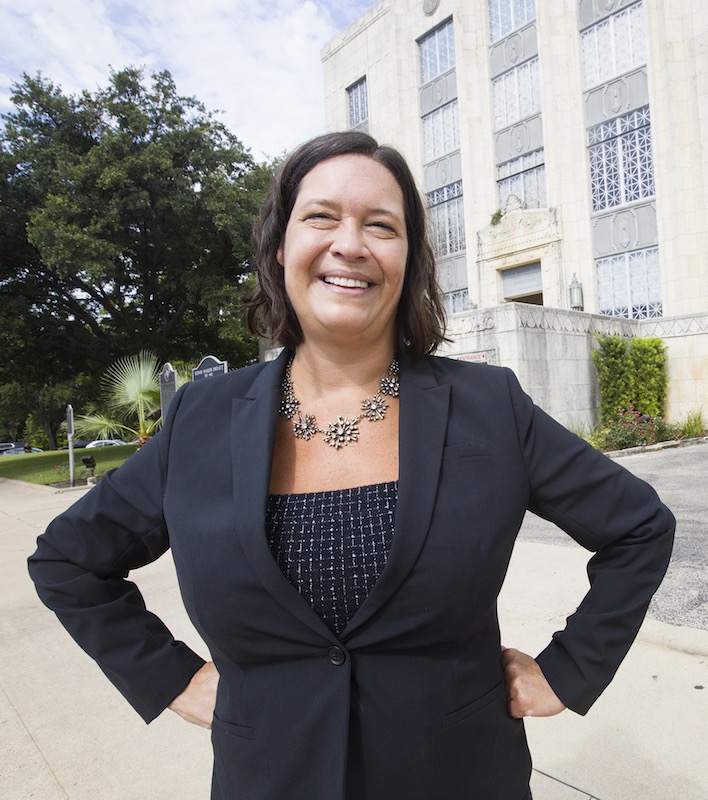 In addition to her work at the TLSC and as an adjunct professor at the UT-Austin School of Law, Martinson has been an assistant county attorney and worked with clients in the Child Protective Services system. “I have spent two decades on the front lines in Travis County,” she said, “litigating and fighting for criminal defendants, victims of domestic violence and sexual assault, and for families in the CPS system.” After “working in the system for 20 years,” she has come to believe in a need for dramatic change.

The other declared challenger in the D.A. race is Garza, co-executive director of the Workers Defense Project. Like Martinson, he has described the local criminal justice system as “broken,” although with a somewhat different early emphasis on bail reform (to stop locking people up “because they’re poor”), better handling of mental health cases, and protecting the local immigrant community.

Both challengers are coming at Moore from the left, and the incumbent has already been on the defensive against charges that Travis County is behind the curve on reforms making headlines elsewhere: decriminalization of “victimless” offenses, reduced incarceration, various strategies for diverting prosecution in favor of re-education, public services, and treatment. As Martinson describes it, “Our criminal justice system is a well-oiled machine that measures success by incarcerating individuals for offenses that criminalize race, gender, status, and class.”

For her part, Moore is ready to run on her record since being elected in 2016 to succeed Rosemary Lehmberg, including cleaning house at the D.A.’s Office and instituting her own programs. At her May campaign kickoff, Moore declared that Travis County can be both “safe and progressive” and insisted she has been steadily making the reforms – reducing incarceration and prioritizing serious crimes – that her challengers are demanding. Moore specifically noted that her office has worked with other law enforcement agencies to dramatically reduce felony prosecutions for possession of controlled substances, adding: “We’re not done. You’re going to see more progress as we address these cases as a public health issue, not a public safety issue.” (This was before her office’s dismissal of cannabis charges in the wake of changes to state law.)

The primary elections are eight months away on March 3, 2020, and formal candidate filing isn’t until this December, giving plenty of time for more debate and perhaps a few more candidates (no Republican has yet announced for district attorney). With calls for more “progressive” prosecutors reverberating across the country, the campaigns in Travis County look to be heating up.