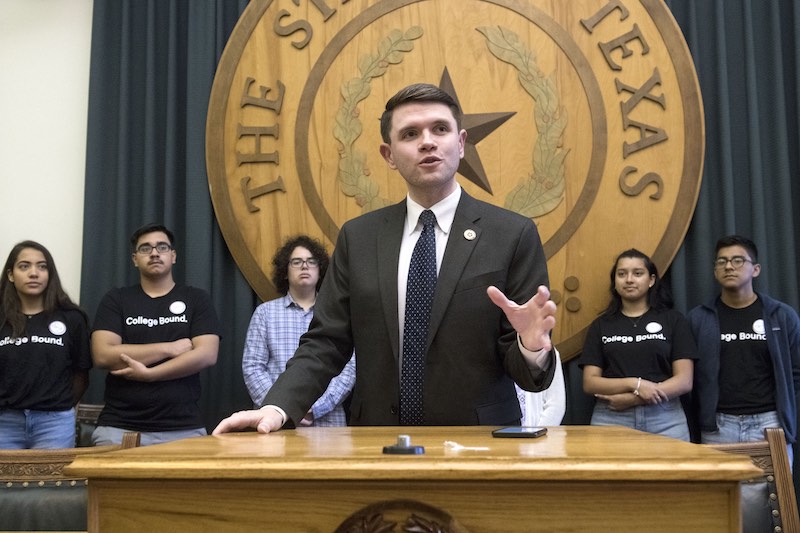 Amid recent reports of abuse and neglect at U.S.-Mexico border facilities housing detained migrants, a delegation of state and Congressional lawmakers, including Rep. Joaquin Castro, D-Texas, toured holding stations in El Paso and Clint on Monday, July 1, to see the squalid conditions firsthand.

Freshman Rep. James Talarico, D-Round Rock, joined the trip as the sole Central Texas state lawmaker, along with Reps. Diego Bernal, Mary González, and César Blanco. In an interview with the Chronicle following the tour, Talarico describes the conditions as “inhumane” and “dystopian.” Federal officials (who trailed the group) made clear that lawmakers were barred from bringing any recording devices, including phones, or even speaking with any of the women, men, and children being held.

The two Border Patrol stations are meant to be temporary holding cells but have taken on more migrants than they can handle for longer periods of time than usual, leading to cramped spaces and fewer resources to go around. The El Paso station, which houses “family units” and “single females,” came under fire just last week for holding more than 300 people when it was built to hold 85. While the bulk of those migrants have been transferred following public outcry, Talarico says the conditions were still “troubling.”

There were up to eight women clustered together in small, jail-like cells with concrete floors. As the holding station is meant for short-term use, there is no recreation room, no outdoor time; those held are only released to take showers. For some, it likely feels like there’s no end in sight: A guard privately divulged to Talarico that some women have been held for up to 40 days. Some women had been pregnant and given birth in the facility. A group of families who were scheduled to be deported back to Mexico looked “very scared,” said Talarico. One group was quarantined; a window in their cell was marked with the word “flu” in blue letters. When lawmakers asked the on-staff physician assistant if medical care in the facility was adequate, he replied, “No comment.”

“It was dystopian and felt very surreal,” says Talarico. “These are conditions I would never let my aunt, mother, or child be left in, and this is being done in our name. It was pretty shocking to see.” He continued, “These folks are not criminals, they are not dangerous threats – they are families seeking to build a better life.”

The Clint facility houses children as young as 15 months and up to 17 years old; until a few weeks ago, it held 700 children, though the building is only meant for 100. In late June, the Associated Press painted a startling picture of the neglect kids faced there, including unsanitary conditions, children made responsible for caring for other children, and lack of food. Border Patrol agents with no medical or child care training told Talarico they turned into caretakers when an influx of sick children entered the station. When the station become overpopulated, agents pulled materials from their personal ranches (like from horse barns) to house the children. A rash of suicide attempts among the children and agents swept through during overcapacity, the Austin-area lawmaker was told.

“We are sending close to a billion dollars from our state budget to border patrol and security, but where is the money really going?” asks Talarico, referring to the $800 million earmarked for border security operations in the 2020-21 state budget. “Gun boats may look good in campaign ads, but Border Patrol [agents] remain under-resourced and need basic things like bus drivers and transportation, but [they] aren’t seeing it. It doesn’t look like the money is helping this situation.”

Congressional lawmakers, including Castro and Rep. Alexandria Ocasio-Cortez, D-New York, strongly condemned the conditions they witnessed after the Monday tour. “We saw that the system is still broken. That peoples’ human rights are still being abused,” said Castro, who learned that at least one facility had no running water. “One of the women said that she was told by an agent to drink water out of the toilet,” he said. (Castro managed to take photos and video of the facility, which he shared on Twitter.) Ocasio-Cortez described the experience as “horrifying,” and “haunting.” It is “hard to understate the enormity of the problem,” she wrote on social media. “We’re talking systemic cruelty with a dehumanizing culture that treats them like animals.”

Since Border Patrol has refused to accept humanitarian supplies like diapers and toothbrushes, Talarico is using his campaign funds to match donations up to $2,020 to LUPE (La Unión del Pueblo Entero) an organization doing immigration-focused legal defense work to keep families together. “The best thing we can do right now is send money to the grassroots groups that can empower advocates who work on the ground to help the situation every day.”