LGBTQ activists and allies turn out to support attendees

More than 100 protesters and counterprotesters descended on the Leander Public Library Saturday afternoon (June 15), to both oppose and support a private family-friendly Pride event put on by a local church. 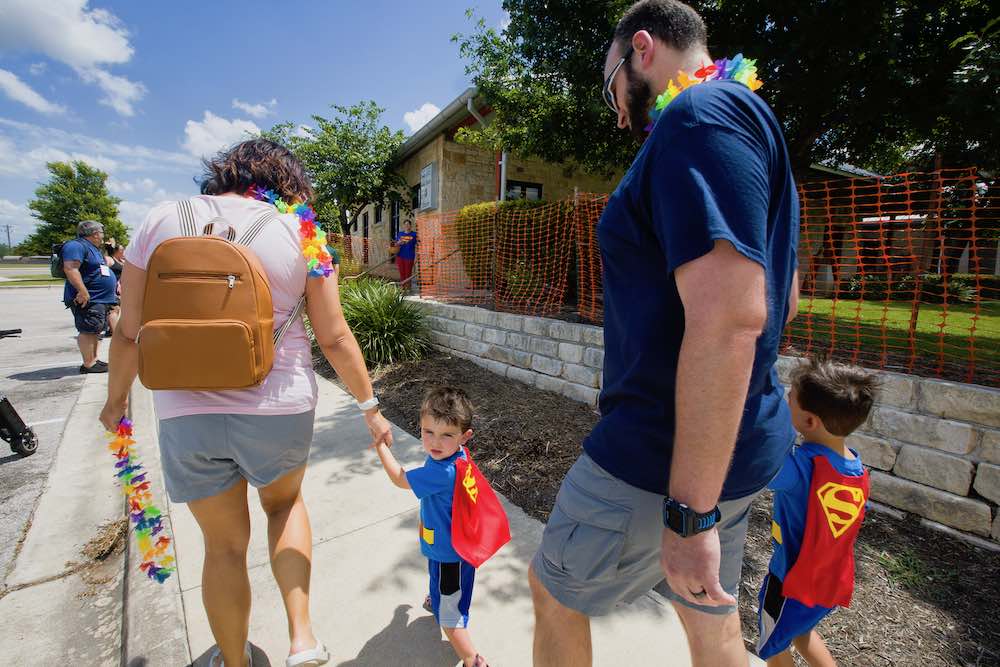 One family entering the event (Photo by Jana Birchum)

The event, originally planned as a Drag Queen Story Hour, was saved by the Open Cathedral Church after the library canceled the event in May amid protests and objections raised by, among others, the mayor of Leander. Across the country, and right here in Austin, drag storytimes have become a target for alt-right agitators who argue the events sexualize children; sponsors and supporters note these story hours actually educate kids about inclusivity and diversity.

Open Cathedral told the Chronicle earlier this week that the church chose to rent out the library space and host the event, to ensure everyone knew they were welcome and loved. Subsequently, the city of Leander decided to close the library to the public, except for the event's ticketed attendees, to prevent protesters from all sides from entering and causing disruption. Then, on Friday, June 14, the church’s lead minister Ryan Hart announced via Facebook that the event would not feature drag because the performer had an “unavoidable work commitment.”

However, according to Austin drag king Papi Churro, that’s not the case. Valeri Abrego, Papi Churro’s alter ego, told the Chronicle they were originally asked to read at the event by a Leander librarian, and then again by Open Cathedral once the city canceled the event. Abrego willingly submitted information for a background check, but said Hart may have changed his mind upon learning that Abrego teaches hip-hop dance classes at a local burlesque studio. When Abrego reached out last week, Hart said he was still waiting on the background check to come through, and then stopped responding to Abrego’s emails.

When asked why Abrego wasn’t performing at the event Saturday, Hart told the Chronicle he wanted to “keep it in the present” and focus on the positivity of the successful event. Allies and LGBTQ activists made the most of the afternoon, brandishing all sorts of rainbows and musical instruments. (Photo by Jana Birchum)

“I wanted to teach my kids equality and that they have a right to see everything,” said Stacy Amendola, who attended the storytime with her children and her husband, a retired military veteran. “My son, when he picks out a ‘girl's toy’ and someone says something to him, he says it’s a toy, so we wanted to teach him, this is a storytime, it’s nothing more than somebody reading a story.” Another woman broke down in tears, saying: “I don’t understand how there’s so much hate.”

Miss Kitty Litter ATX, the drag queen who was harassed by InfoWars last week after she led a storytime at an Austin Public Library, was also in attendance. Though the same InfoWars representative continued to try and harass Kitty Litter, she was continuously shielded by counterprotesters and allies. “It’s a little triggering,” she told the Chronicle. “But just seeing the support and the community come together like this is kind of bolstering my courage and makes me hope we can come to a better place.”

* Editor's Note: After this post went up on Saturday, Cedar Park City Council Member Rodney T. Robinson angrily demanded that we retract the assertion that he handed out Bibles in Leander. Which, as you can see above, we did not assert, since we used "was" instead of "were." We take him at his word that if we had made that assertion, it would be "a bullshit lie" and "defamation of character," as Robinson told us. He did not do that thing. – Mike Clark-Madison, News Editor