No sit/no lie, no more

City Council on Thursday, June 6, will discuss, but not vote on, changes to city ordinances that currently criminalize aspects of homelessness. 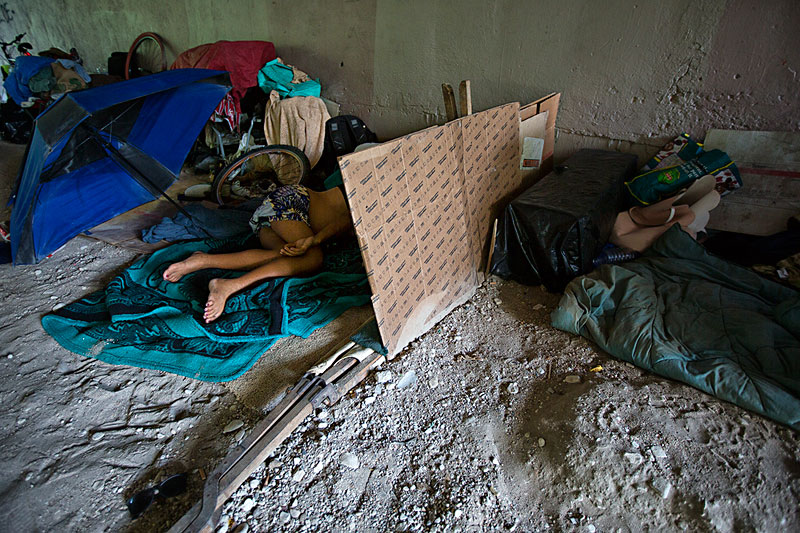 Item 45 is a draft ordinance that amends or repeals existing laws, changing the city's "no sit/no lie" rules – which currently ban anyone from sitting, lying down, or camping in public – to prevent only disruptive or dangerous behavior. The ordinance would also repeal the ban on panhandling Downtown between the hours of 7pm and 7am.

The ordinance was brought forth by Council Member Greg Casar, along with three co-sponsors, for action this week, but a vote won't come until the June 20 meeting. At Tuesday's (June 4) work session, several Council members called out what they characterized as misinformation in the community regarding the proposed changes. Casar circulated a document addressing many concerns raised by those unnerved by the new rules (no, a tent city will not be allowed on S. Congress; yes, aggressive and unwanted behavior can still be cited). "We need to correct the misinformation" surrounding the ordinance, Casar said of the postponement, but added, "I would not be OK to go another summer saying, 'If you sleep in your car, that's a criminal violation.'"

The draft ordinance follows a set of 2017 reports by the Office of the City Auditor regarding homelessness in Austin; one key finding was that, by adding criminal offenses to the records of those living without shelter, the city's laws made it harder for them to attain housing and thus deepened and prolonged the cycle of homelessness. Between 2014 and 2016, according to the report, 18,000 citations were issued for these offenses; in about 90% of cases, the person cited did not appear in court, which in 72% of those cases resulted in an arrest warrant. The report notes that Austin faces exposure to civil rights litigation, as peer cities have been, if the "no sit/no lie" and panhandling ordinances are not repealed.

The 2017 reports also highlighted Austin's need for more shelter capacity, which Coun­cil has addressed in a number of resolutions this year that direct staff to find more locations (especially outside of Downtown) for temporary housing. Item 49 on Thurs­day's agenda directs City Manager Spencer Cronk to negotiate the purchase of a property that could be the site for a 50- to 100-bed shelter, and to assess the funding needed for support services at that site. The most recent Point-in-Time count, conducted in January, found 2,255 people experiencing homelessness in Austin and Travis County, a 5% jump from the previous year.

Elsewhere on the 105-Item agenda, Item 39 will authorize Cronk to negotiate and execute a contract with Pecan Grove Golf Partners to operate Butler Park Pitch & Putt. Longtime operator Lee Kinser, whose family first built the 9-hole course 70 years ago, was denied a contract extension after she left a signature off one of the forms she submitted. Despite reservations, the Parks and Recreation Board ultimately voted to recommend Pecan Grove be awarded the contract, with language urging City Council to digitize the process to avert similar errors in the future.

A resolution brought by CM Leslie Pool will direct Cronk to explore a city boycott of the state of Alabama in response to the state's new draconian abortion regulations. That could include barring city employee travel to Alabama or contracts with companies based there. The resolution got some pushback on the Council message board, questioning the efficacy of such a boycott; the concerns from her colleagues prompted Pool to add new language to her resolution. Now listed as Item 100 on the agenda, the resolution directs Cronk to explore the "potential impact" of a boycott, or to find alternative ways of protesting abortion bans "without adversely affecting service industry employees or low-income individuals."

On the land use front, Council will consider code changes that would allow up to 50% of a mobile home park's capacity to be used for recreational vehicles; Casar may propose an amendment to bump that number up to 80%. This is part of an effort to bring existing mobile home parks under the land development code's MH district zoning, which currently disallows RVs, without displacing the people living in those parks. Another zoning case involves the forthcoming Austin FC stadium at McKalla Place, with the soccer team asking for 130 feet in height to allow for a partial roof to shade fans. In May, the Planning Commission recommended approval of the request while urging Austin FC to conduct a traffic study as soon as possible, rather than waiting for site plan approval as the code allows.