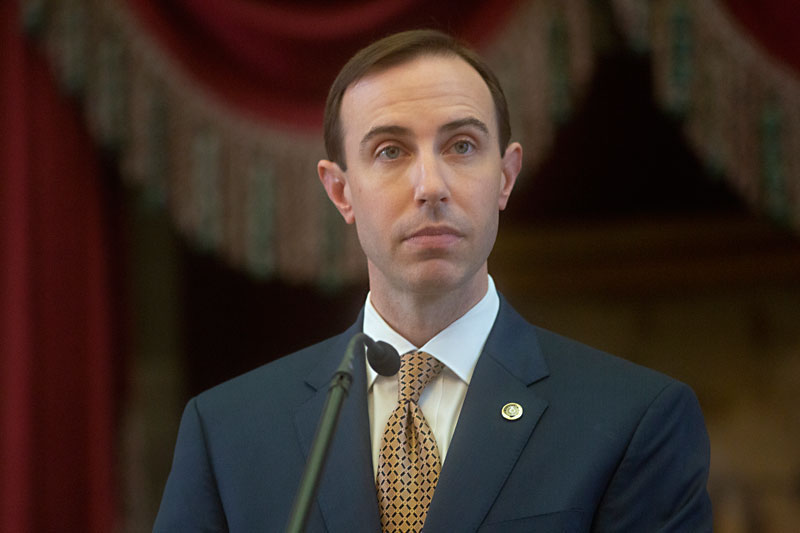 SoS David Whitley is out the door. (Photo by Jana Birchum)

Nominated by Gov. Greg Abbott in December, Whitley still needed confirmation from at least two-thirds of the Texas Senate before officially assuming the role. But all 12 Democrats stood as a united front throughout session against the SoS, while Republicans kept punting the confirmation vote down the road. A vote was never called and seeing the writing on the wall in the final hours of the Senate legislative session, Whitley resigned.

“I built a bridge for opposing voices to engage in dialogue to improve election integrity and access,” wrote Whitley in his resignation letter to Abbott, as first reported by the Statesman. “I am forever indebted to Texas for all it has done for my family and me.” Abbott accepted the resignation and praised Whitley – accused of voter intimidation and discrimination in three separate lawsuits – for his “moral character and integrity.”

Sen. José Rodríguez, D-El Paso, Chair of the Senate Democratic Caucus, said the group “felt strongly that this nomination was undermined by the fear and anxiety created” by the SoS’s voter purge. “The damage done by his actions requires a clear message to the voters of Texas: All eligible voters should be assisted by the state’s highest election officer in exercising their right to vote, not targeted for suppression by the state’s leadership," he said in a statement following the Senate's adjournment.

When Whitley advised counties to investigate a list of some 95,000 registered voters whose U.S. citizenship was possibly in doubt (of whom 58,000 had cast a ballot in the past), it ignited a voter-fraud frenzy among the right-wing, including AG Ken Paxton and even Donald Trump. It was soon discovered the list was deeply flawed, and contained many naturalized citizens, such as Julieta Garibay, a Mexican immigrant and resident of Austin.

Before a Senate Nominations Committee hearing earlier this year, Whitley mostly ducked blame for the fiasco. Voting rights groups launched three suits naming Whitley and other state officials, claiming the SoS “targeted” naturalized citizens and sought to “strip minority voters from the rolls.” His actions also spurred a Congressional investigation, met with resistance from state officials. Texas ended up settling the suits and was forced to pay $450,000 in plaintiffs' fees and court costs.

The consensus among voting rights activists and Democrats? Good riddance and don't let the door hit you on the way out. The controversial Secretary of State stepping down from his post is also another win for civil rights advocates who saw victory this session when Senate Bill 9, deemed the harshest voter suppression bill in the country, and its provisions, withered away after citizen pushback.

“One of the first things the interim Republican Secretary of State did was an attempt to purge the voting rights of nearly 100,000 Texans, proving from the start that he could not be trusted with a permanent job,” said Ed Espinoza, executive director of Progress Texas. “More than a half dozen voting rights groups worked all session long to oppose the nomination, and we are pleased that Senate Democrats held together against it.”