District Attorney Margaret Moore kicked off her 2020 campaign Thursday evening at Speakeasy on Congress Ave. Moore told an enthusiastic crowd thick with courthouse regulars that Travis County can be both “safe and progressive,” and that can best be done by “working together.” Moore cited her creation of a Family Violence Unit as addressing a major issue in local criminal justice – that family violence cases constitute the second most numerous felony cases in the county – and pointed as well to progress in addressing sexual assaults. She said her office has taken important steps toward “national standards” of enforcement, via her establishment of an Adult Sexual Assault Unit.

Overall, she said, “We have tried more cases, mostly violent cases. And yet we are sending fewer people to the penitentiary. So we can be progressive, crack down on the violence, and handle other cases differently.”

Moore repeatedly emphasized “collaboration and partnership” among various offices and local officials as being the central strategy of her efforts for reforming the D.A.’s office and the criminal justice system – not only among the higher-profile Austin officials, but with a list of smaller municipalities within Travis County: Pflugerville, Manor, Lakeway … “We are working together in a way that I have not experienced in all the years I have been serving this county and this state in various capacities.”

Moore cited major progress also on what has traditionally been the highest category of state jail felony charges – possession of less than a gram of a controlled substance – and said her office, by moving such cases out of state jail felony courts, had “reduced incarceration for those crimes by 97%.”

“We’re not done,” Moore continued. “You’re going to see more progress, as we address these cases as a public health issue, not a public safety issue.” She added that she had been able to do so only through a “broad partnership” throughout county law enforcement – "not by telling people what to do, but by asking them to work with us." Speaking more specifically of the support she enjoys from her staff in “representing this community,” she said, “We are data-driven, we are victim-centered, and we are devoted to justice.”

Moore spent a few minutes thanking her campaign team, her assistant prosecutors, and the co-sponsors of the kickoff event (not all of whom could attend): Travis County Judge Sarah Eckhardt (in attendance), Sheriff Sally Hernandez, U.S. Rep. Lloyd Doggett, Mayor Steve Adler, and state Sen. Kirk Watson (“he’s busy with something up at the Capitol”). She cited Adler (not on hand) in particular as an example of an official who exemplifies “how we can all work together.”

Although she touched on the D.A.’s work on sexual assaults, Moore did not address what has been the strong criticism her office has received over insufficient or negligent handling of rape and assault cases. The issue, a persistent topic of local coverage, had received national attention Thursday morning, in a New York Times story (based in part on reporting by the Chronicle’s Sarah Marloff) headlined, “These Rape Victims Had to Sue to Get the Police to Investigate.”

Moore is one of several officials and agencies that are defendants in a federal class action lawsuit brought by a group of local rape survivors. Asked about the criticisms of her office and about the Times’ story, Moore said she couldn’t respond in detail because of the pending lawsuit, but that she objects to some of the “sensationalist” aspects of the reporting. “When I’m able to do so,” she said, “I will respond in greater detail.”

UPDATE 3:50pm: On Friday afternoon, Austin Firefighter Association President Bob Nicks issued a statement critical of Moore’s handling of the case of former firefighter James Baker, who pled guilty last October of “invasive visual recording” of a female colleague, Kelly Gall. Under a plea bargain, Baker was allowed to resign, but received no imprisonment for the state jail felony, if he avoids new charges for five years. According to Nicks’ statement, “The Austin Firefighters Association (AFA) condemns DA Margret [sic] Moore for her treatment of Firefighter Kelly Gall during the review of Kelly’s case as well as DA Moore’s failure to take Firefighter Gall’s case to trial.”

The statement continues (in part): “The AFA is sure that DA Moore is fine in other areas of her job but her record on sexual assault cases is abysmal and does not comport with the values of Travis County. This is an important item of public concern and must become a major topic of discussion during DA Moore’s reelection campaign."

UPDATE 5:10pm: Later this afternoon, D.A. Moore responded to the AFA statement, saying (in part): "Mr. Nicks and Ms. Gall have persisted in criticizing a decision made by this Office that was both fair and in the interest of justice. … Mr. Baker pled guilty to a felony, Invasive Recording; received the maximum community service provided by law; and was forced to surrender permanently his firefighting licensure. The assertions made by Mr. Nicks about the record of this Office are untrue, and he insults the hardworking women and men who are investigating, pleading, and trying these cases as well as the victims who heroically report their assaults, pursue prosecution, and, when necessary, put their stories before juries. … I am proud of the work of this Office on sexual assaults, and I look forward to getting our story out during my campaign." 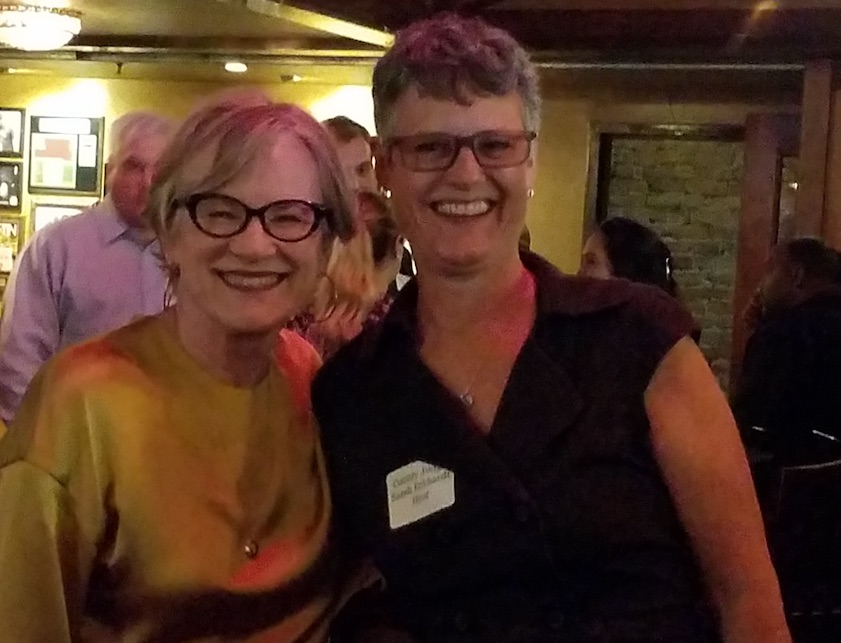 Eckhardt was followed by NAACP President Nelson Linder with a more formal introduction, in which he sketched his historical experience and that of the NAACP, largely in confrontation with the District Attorney’s office, saying that under Moore has changed to a spirit of cooperation. He credited Moore with “bold, courageous action to change the culture of the city,” specifically citing her creation of a Civil Rights Division to address discriminatory aspects of criminal justice. He called the district attorney’s office the most important in the city, saying “if we can get that part right, other things are going to be okay.”

Linder called Moore the “most innovative, the most inclusive, the most fair-minded D.A. in the country. … The work she’s done, the folks she’s hired on her staff, and just the person she is, have earned her the right for four more years.”

In part because of the ongoing controversies over sexual assault enforcement, Moore is likely to face challengers for the Democratic Party nomination next March. Reportedly, Erin Martinson of the Texas Legal Services Center (and UT Law School) is considering a run, as is José Garza, executive director of the Workers Defense Project. (Neither Martinson nor Garza immediately responded to Chronicle inquiries about their plans.)

On a lighter note, Moore closed the event with a performance with her all-woman rock band, Mother Rukkus. And asked earlier what observers should think of a prosecutor holding her campaign kickoff in a “speakeasy,” she laughed. “That’s pretty much Austin. This ain’t Dallas, honey.”