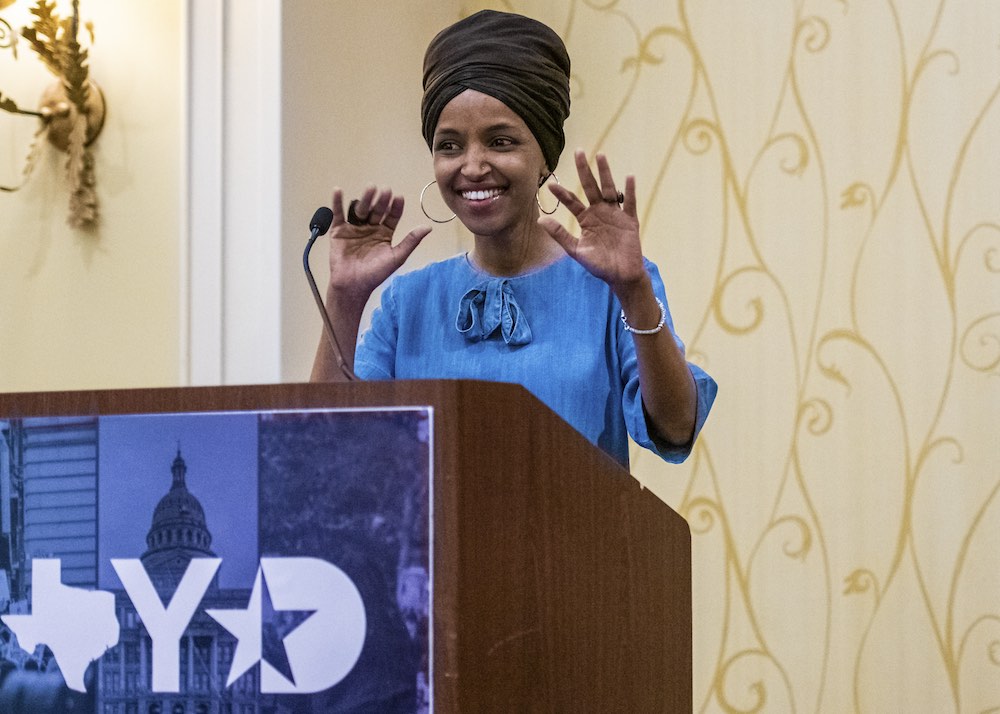 U.S. Rep. Ilhan Omar, D-Minneapolis, made a brief stop at the Texas Young Democrats convention in South Austin on Sunday, May 19, where she roused the crowd with a condensed retelling of her biography and congratulated the state party on gains made in the 2018 midterms.

Omar also encouraged the young organizers to continue fighting against voter suppression efforts in Texas, such as Senate Bill 9, the most recent bill cooked up by the GOP to restrict access to the ballot box. “It doesn’t matter how many laws that they pass to restrict our basic right to participate in our democracy,“ she said, “we know that by having a conversation with our friends, by mobilizing our families, and awakening people to the realities of the policies they are trying to enact … we are able to turn the tide.”

Omar came to town as a guest at the citywide Iftar dinner on Saturday night to celebrate Ramadan in Austin. The annual event is hosted by Emgage (formerly EmergeUSA), a nonprofit focusing on recruiting Muslims to run for office. Mayor Steve Adler also attended the dinner as a guest of honor, which prompted Texas Agriculture Commissioner Sid Miller to issue a statement demanding Adler skip the dinner due to Omar’s attendance. “I hope that Mayor Adler will heed my call and be a no-show for this dinner as long as Congresswoman Omar remains on the program,” Miller wrote, before repeating bad faith attacks emanating from the right that characterize Omar – a Somali refugee and one of the first Muslim women elected to Congress – as anti-Semitic.

Adler responded with a statement that makes no mention of Miller: “It is a gift that our community gathers at this City Wide Iftar … a time for reflection, piety, and growing closer to God.” The statement concludes with the most direct response to Miller’s demand: “As mayor, it is my privilege and responsibility to lean into such learning moments with my community – not to back away from them.”

More than just a statewide embarrassment, Miller has amplified some of the most toxic strains of thought emerging from the far right in recent years. In 2015, he shared a Facebook post that suggested the United States should drop nuclear bombs on Muslim countries; in the same year, he shared another post that compared Syrian refugees to rattlesnakes. Not only is his rhetoric an embarrassment to the state of Texas, it has contributed to the Islamophobia gripping the far right and that follows Omar around the country.

Yet Omar also seems unfazed. She did not mention Miller by name at the Texas Young Dems (although during her Iftar speech, according to press reports, she did talk about the threats facing the Muslim community), but instead urged the young crowd to take a stand against bigotry in the state and nation at large. “We are going to defeat the people who are against seeing a flourishing democracy,” she said. “We are going to defeat the xenophobics, the homophobics, [and] the racists who don’t see us in their future.”