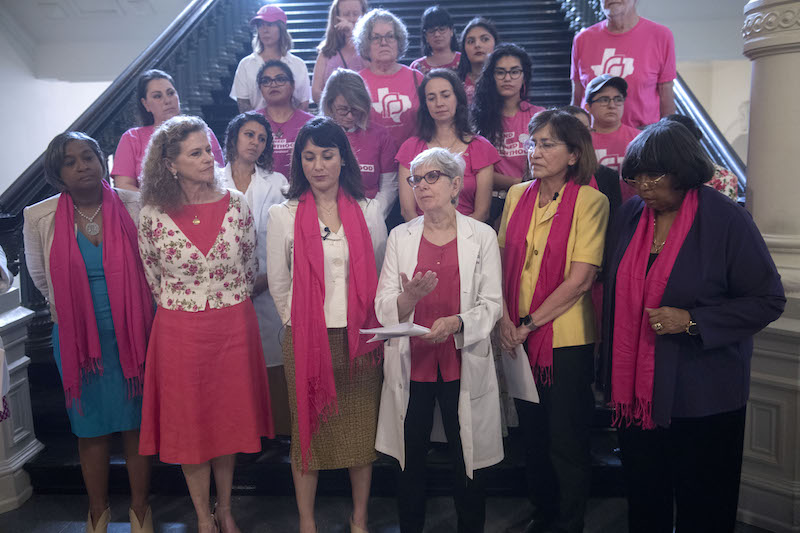 Legislators, doctors, and Planned Parenthood patients and advocates gathered outside the Texas House to warn Texas Republicans of the public health damage SB 22 would inflict. (Photo by John Anderson)

Following a six-hour floor hearing that stretched into Friday evening, the GOP-dominated Texas House approved a bill that threatens the future of Planned Parenthood on East Seventh Street and Chicon, a vital community resource for more than four decades.

Senate Bill 22 by Sen. Donna Campbell, R-New Braunfels, bars any “taxpayer resource transaction” between a local government and an abortion provider or affiliate, placing Planned Parenthood’s $1/year lease agreement with the city of Austin in jeopardy, as detailed in this week’s news feature story. The House’s 81-65 vote means the bill is just one step away from Gov. Greg Abbott’s desk for a signature to become law.

The anti-choice-fueled bill punishes Planned Parenthood in the name of attacking abortion rights. In reality, it wouldn’t impact abortion but would damage basic preventative health care like breast and cervical cancer screenings, HIV tests, and birth control for more than 5,000 low-income and uninsured women (and other patients) who visit the Austin center each year. SB 22 also takes aim at local health partnerships with Planned Parenthood across the state, including STI testing, teen pregnancy prevention education, and assisting in public health crises.

In laying out and defending the bill, Rep. Candy Noble, R-Allen, author of the House counterpart, criticized the cost taxpayers are supposedly forced to pay toward the “abortion industry” – an untrue claim. No state or federal tax dollars go toward abortion care. Eliciting loud cheers from Planned Parenthood advocates seated in the House gallery, Rep. Eddie Rodriguez, D-Austin, questioned Noble’s intent: “How are you protecting my taxpayers in Austin, Texas with this bill?,” asked Rodriguez, who represents the district (House District 51) in which the downtown Planned Parenthood is located.

Rep. Tony Tinderholt, R-Arlington, a right-wing legislator who filed a bill this session that could have forced abortion-seeking women to face the death penalty, sought to expand SB 22’s reach to include hospitals, meaning they would be required to stop providing abortions if they want to continue local government contracts; however, that amendment was withdrawn.

Democrats offered the bulk of amendments, seeking to mitigate the damage of SB 22. Noble swatted away all Democrat-authored proposals and refused to even engage in conversation with amendment authors when requested – not the procedural norm. Rather, she showed a flagrant lack of professional courtesy. The failure of the amendments to pass the GOP-dominated House often highlighted the true intentions of the bill. In particular, while Noble touted the legislation as an avenue to protect local taxpayer interests, an amendment from Rep. John Bucy, D-Austin, would allow local taxpayers to decide what to do when it comes to those abortion affiliate partnerships. “My amendment goes to the heart of the local taxpayer,” said Bucy. “Local voters can decide what they want to do in their own community.” Contradicting her own ostensible intent, Noble moved to table the measure. Noting the hypocrisy, Rep. Roland Gutierrez, D-San Antonio, suggested the GOP “might as well eliminate” its love of local control from its party platform. 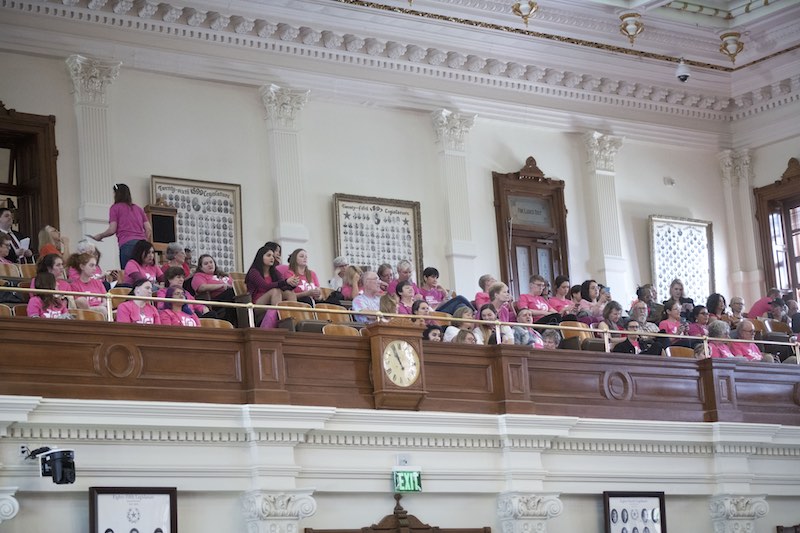 Democrats told personal stories about how Planned Parenthood impacted their lives on the House floor. Sharing that the reproductive care provider helped monitor her health for several years after finding an abnormal pap smear at age 20, Austin Rep. Erin Zwiener offered an ultimately tabled measure that would remove abortion affiliates (not providers) from the rules. Rep. Ana-Maria Ramos, D-Richardson, suggested amendments that would exempt SB 22 from areas with high teen pregnancy rates and would exclude the bill from communities where more than 10% are uninsured. Drawing from her own experience as a teenage mother and Planned Parenthood patient, an emotional Ramos begged Republican lawmakers to consider the consequence that blocking access to birth control would have on working class Texans. “As a 15-year-old with a baby, I didn't know if I was going to eat the next day,” she said. “When we deny young teens access to contraception we are accomplices in making life negative for them.”

Early on, Houston pro-choice Republican Rep. Sarah Davis, R-West University Place, effectively sought to kill the legislation but her amendment was tabled. "This bill is about politics, it's not about good public policy and it's not about improving public health,” said Davis.

Rep. Ina Minjarez, D-San Antonio, offered an amendment that would have protected resources for survivors of sexual assault from SB 22 but following a two-and-a-half hour break where House members were seen huddling and possibly negotiating, Minajrez immediately withdrew her amendment.

“The bill disguises itself as an anti-abortion bill, but it's about cutting off access to people who are under and uninsured,” said Rep. Jessica Farrar, D-Houston, before a final vote was taken. “It will actually have the impact of driving up abortion rates by cutting off access to birth control services.”

Prior to the House debate, legislators and Planned Parenthood advocates congregated outside the House door to stress how damaging SB 22 would be to local communities. The bill is a “slap in the face against Planned Parenthood providing any services to the community,” said longtime Austin OB-GYN Dr. Diana Weihs. Round Rock-based physician Dr. Rebecca Teng pointed out that amid all the taxpayer talk, Planned Parenthood partnerships and services – like birth control – save taxpayer money by reducing unplanned pregnancies, which help cut Medicaid-paid births. More than half of Texas births are paid for by Medicaid, according to the Kaiser Family Foundation.

In 1993, an uninsured 19-year-old Natalie Vallot O’Leary relied on the reproductive health provider for services. Doctors found a breast lump during her annual exam, one she likely couldn’t schedule without insurance. In good health today, O’Leary, a UT Nursing School student, says her health scare experience would have been “far more frightening without the guidance and resources” of Planned Parenthood.

“It’s even harder now to find health care than it was back then,” said O’Leary. “As a taxpayer, as a voter, as now a healthcare provider, I know that we need more health care access – not less.”