Towering over the southern entrance of the Williamson County Courthouse, on the Georgetown Square, is a 60-foot monolith and statue dedicated to “Confederate Soldiers and Sailors.” 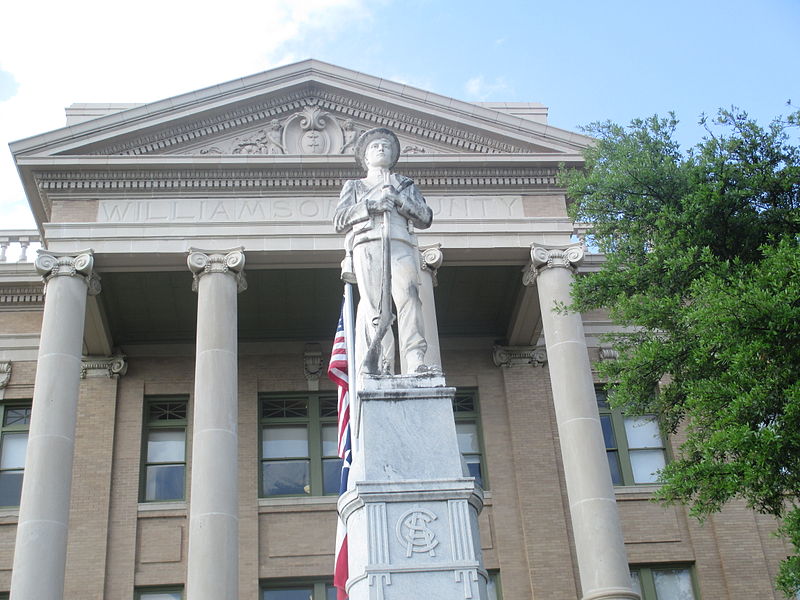 Like most such monuments throughout the Southern states (and elsewhere), it dates not from the Civil War period or immediately thereafter – but from 1916, during the Jim Crow era of racist backlash against legal rights for African Americans. In keeping with white supremacist sentiments about the “Lost Cause” of Southern secession, an inscription reads: "No braver patriots ever fought, no braver deeds were ever wrought.”

In recent years, public efforts have been organized either to move the monument or at least to provide nearby information countering its glorification of the Confederacy’s pro-slavery rebellion. (Adding insult to injury, a neighboring plaque describes early African American residents only as “pioneer settlers.”) One such 2016-2017 effort, requesting County Commissioners add a plaque providing better historical context, was rejected 4-1 – even though the plaque would also have to be approved by the state Historical Commission.

In recent months another local group, calling themselves the WilCo Patriots, has been circulating a petition requesting the monument be moved to a less prominent Georgetown site. In an April press release initiating broader organizing, the group wrote in part: “The statue, erected during the Jim Crow Era, creates an unwelcoming environment for the people of color in our community, and we plan to change that. Ending racial oppression starts with small steps, this is one we can easily achieve to move in that direction.”

Citing research reflecting the white supremacist history of the such monuments and their insulting and intimidating effects on African-American residents, the release quotes Wilco resident Audrey Amos-McGeehee: “The erection of the statue emboldens the glorification of the fight to keep slavery in place from over 150 years ago, while ignoring the abolition of slavery.”

Although similar efforts in Travis County (and on the UT-Austin campus) have been successful in convincing officials to “de-Confederate” some public spaces, thus far Williamson County Commissioners have resisted any action, providing only lip-service to further review. They may soon get an additional boost from the Legislature, where several bills have been filed that would make it more difficult for local jurisdictions to move or remove Confederate monuments. The most restrictive bill – HB 583, authored by James White, R-Woodville – would not only forbid the removal of such war monuments without state permission, it would criminalize any unpermitted removals. The bill – approved in committee, yet to be scheduled for the House floor, suggesting it might be foundering – would require approval of any move by a state agency (Historical Commission, Preservation Board), and relocation only to an “equally prominent location,” with violations punishable by fines or jail terms.

Update May 8: On Tuesday, the state Senate approved (on a partisan vote) a somewhat less restrictive bill, SB 1663 – including civil fines but no criminal penalties – that would create a complex approval structure for moving or removing monuments, while making some distinctions between monuments greater or less than 25 years in age. The intent is much the same as HB 583: to make it much more difficult for local jurisdictions to choose to remove Confederate monuments or markers.

Dr. Christine Eady Mann, planning to begin soon another campaign for Congress in CD 31 (she lost to MJ Hegar in the 2018 Dem primary), is among the WilCo Patriots petitioning for removal of the Georgetown monument. She said the movement will continue, and she understands that people disagree about what should be done, if anything, with the monuments. “We’ll continue pursue either moving it, or having it contextualized. The research shows such statues even have mental health effects on people of color,” she said, “and it moves the needle of racist thinking.” Asked if she thought the controversy might become an issue in her campaign, she said, “It doesn’t impact my thought process. I’m in favor of moving the statue because it’s the right thing to do. It’s not a political calculation.”

Bryan Register, an Austin Community College professor who has been monitoring the monument bills as a member of De-Confederate Austin, said the aim of statue-removal efforts is primarily educational, to “have a public conversation” about the actual history and purpose of these monuments. “It’s a weird issue for the Legislature to centralize,” he said, “so we don’t have these local discussions. … If they succeed in making these efforts illegal, these conversations would never take place.” A Guide to Confederate Monuments in Austin
Where to find them, for as long as they’re still standing