Precourt argues SB 1771 would “jeopardize the viability of Austin FC” 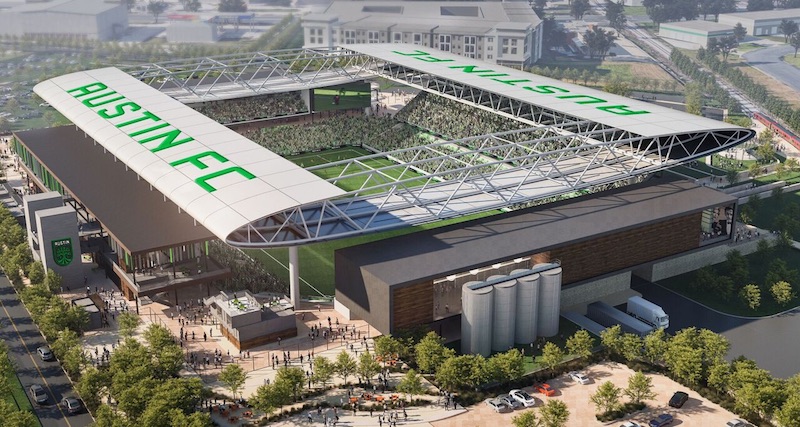 Rendering of the proposed Austin FC stadium at McKalla Place

A bill making its way through the Senate could kill a deal that would bring the city its first major league sports team, Austin FC, according to Precourt Sports Ventures President Dave Greeley.

At a hearing on Tuesday evening, Greeley told the Senate Property Tax Committee that the bill would “jeopardize the viability of Austin FC” because “our funding mechanism and debt obligation would be in peril.” PSV would eventually operate the team and is privately financing the $225 million stadium, to be constructed at McKalla Place, which is owned by the city of Austin.

SB 1771, authored by the committee’s chairman, Paul Bettencourt, R-Houston, would allow taxing jurisdictions which overlap with the city-owned lot to decide if they want to take in property taxes from PSV’s use of the stadium – even though a crucial aspect of the deal between PSV and the city exempted the former from paying taxes on the 24-acre vacant lot. The new rule would apply statewide, but Bettencourt acknowledged that the PSV deal with the city of Austin made him aware of the “anomaly” in the tax code – the “anomaly” being other municipalities (in this case, Austin ISD, ACC, Central Health, and Travis County) lacking the ability to have a voice in tax abatement decisions that affect their constituents.

The hearing saw a return of familiar names to those who followed the #MLS2ATX saga at City Hall. Susan Spataro, the former Travis County auditor who regularly attended neighborhood and City Council meetings to speak against the deal, showed up once again to rail against the unfairness of the deal. Former Travis County Judge Bill Aleshire, who has spent the years since retiring from public office waging legal battles against the city (including threatening a lawsuit over the MLS deal), also testified in support of the bill. “[It’s] very important that the people who elect these other jurisdictions have a voice through them and not have the Austin City Council dictating exemptions to other jurisdictions,” he told the committee.

A newer face to the anti-stadium efforts also testified in support of the bill. James Quintero of the Texas Public Policy Foundation – relishing yet another opportunity to stick it to the city’s elected leaders – called the deal a “murky agreement” that could be the sign of a “troubling trend” in which cities cavalierly hand out property tax exemptions to businesses that occupy land that touches other jurisdictions.

Travis County Precinct 3 Commissioner Gerald Daugherty also spoke in favor of the bill, noting that the county gets most of its revenue from ad valorem taxes. “It’s frightening to me thinking there are dollars out there that the county could have to run county government,” Daugherty said at the hearing. “The county ought to at least have the ability to weigh in on this.” However, Daugherty indicated he would not want to undo the deal, because it was already completed.

Gómez and Spataro, who has served as some sort of volunteer in Gómez’s county commisioner’s office since the former auditor retired, have been pushing back against the MLS deal since it became public. Initially, Gómez opposed PSV’s runner-up location for a stadium at Guerrero Park; when that plan fell through, she shifted her stance to oppose construction of a stadium on any public land. While Gómez has remained relatively quiet on the subject since, Spataro has continued to fight against the deal.

None of the region’s elected officials attended the hearing to speak against the bill, but representatives for the Greater Austin Chamber of Commerce and the Greater Austin Hispanic Chamber of Commerce both spoke against the bill, because it would threaten the millions in economic impact that PSV has promised. Mike Rollins said the deal was made between a “local government unit” and a business “in good faith,” and that passing the legislation – which would only apply to projects completed after Jan. 1, 2019 – “would be like changing the rules in the middle of the game.”

The bill was left pending, but it has a good chance of clearing committee, because it was authored by Bettencourt, the committee’s chairman.