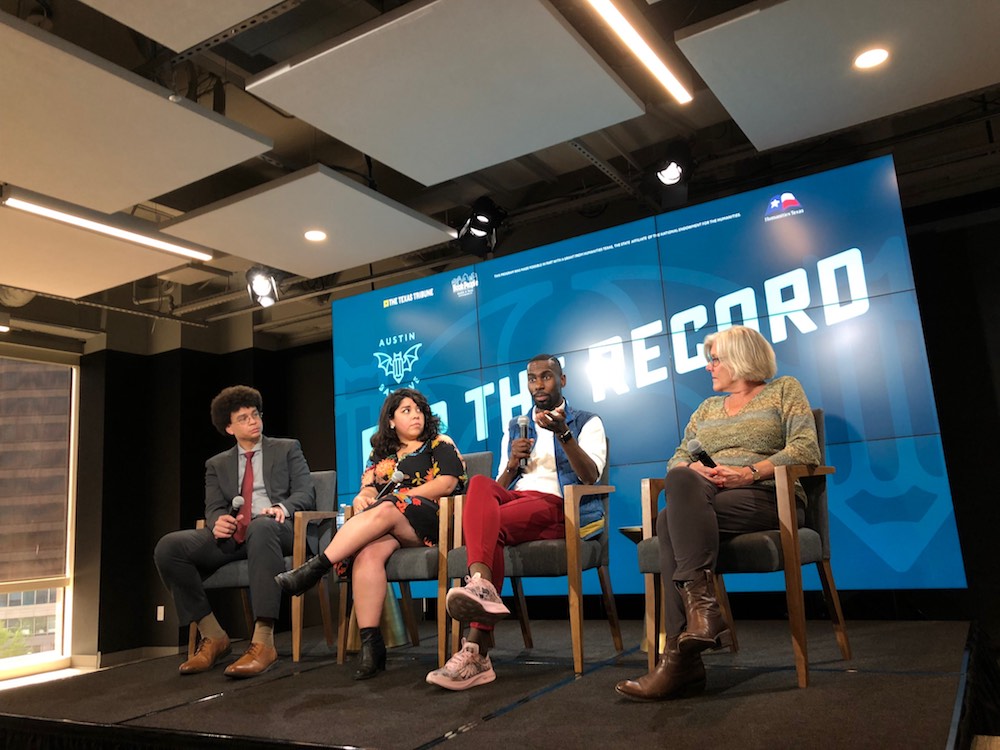 DeRay Mckesson, a leader of the Black Lives Matter movement and co-founder of Pod Save the People, joined The Washington Post’s Ann Gerhart and Alexa Ura of The Texas Tribune on Wednesday, March 20, as part of Austin Bat Cave’s three-day journalism workshop for high school students.

The three speakers, joined by moderator Chris Harris of Just Liberty (and formerly of Grassroots Leadership), discussed the blurring lines between journalism and activism and the nuanced ways the two fields can benefit each other.

Mckesson, recalling a past “secret” meeting to organize a sit-in at the St. Louis Police Department, said he was instructed to not reach out to any media. But Mckesson realized, if it “went poorly, it could be very dangerous if nobody covered it.” Instead of heeding instructions, he contacted a trusted reporter and simply told them when and where to be. Despite the lack of context, the reporter showed up with a camera in hand. “He got these really great photos,” said Mckesson, “that prove we weren’t the aggressors when the police got violent.”

Gerhart described the necessity of a “robust, resourced newsroom” to distribute clear, impartial information as a service to the country, while journalists, as Harris pointed out, play the role of “vessels for information that has to be impartially delivered.” To which, Gerhart added the necessity of content expertise, considering “journalists as generalists” and activists as experts. She and Mckesson both noted the mutual relationship when activists act as a resource for a deeper and broader understanding of the issue, who it affects. Then, activists also play the middleman to introduce journalists to the personal stories of the community needed to humanize issues. “When journalists report on [an issue] it helps me make the case differently,” said Mckesson. Then “people see this is actually an issue.”

Yet activism and journalism is ultimately separated by the outcome, said Ura. Activism has a specific agenda, while the role journalism plays is to provide the public with the information “you need to make the decision on where you stand,” she summarized. Mckesson agreed, adding that where activists question authority, journalists have the right to ask authority questions and receive answers.

This reciprocal relationship brought up the question of impartiality, a term Ura made sure to separate from objectivity. Ura admitted she doesn’t think “complete impartiality is actually possible, but I do think it’s what we need to strive for.” As two women journalists – and Ura as a Latina journalist covering the Hispanic demographic – in a white, male-dominated industry, the two acknowledged their biases (such as Gerhart’s greater likelihood to believe women). But they confirmed their duty to verify facts keeps those biases in check. Ura encouraged journalists to leverage their identity and personal experiences as a tool to inform their journalism and to help push for coverage of underrepresented issues and communities. The next step, though, of writing the story is a process of consistently “checking personal opinions at the door.”

But when the conversation shifted to balance vs. fairness, Ura, using white supremacy as an example, put it bluntly: “There aren’t two sides to everything.” Instead, Ura said focusing on fact-checking the different sides’ reasoning rather than simply giving both equal number of quotes so as to be more fair to the truth. “The rhetoric of white supremacy,” Mckesson added, “has led to lynchings. Giving credence to that and giving that a platform is dangerous.” Throughout the panel though, the trio maintained that while activism and journalism seek different outcomes and serve different duties in society, both work toward the same core purpose of seeking the truth.

“The truth,” Mckesson said, “has to come before reconciliation.”