As the Texas House and Senate move forward with their plans to bolster teacher pay and increase state funding for public schools, hundreds of teachers gathered at the Capitol on Monday with concerns about the proposals from both chambers. 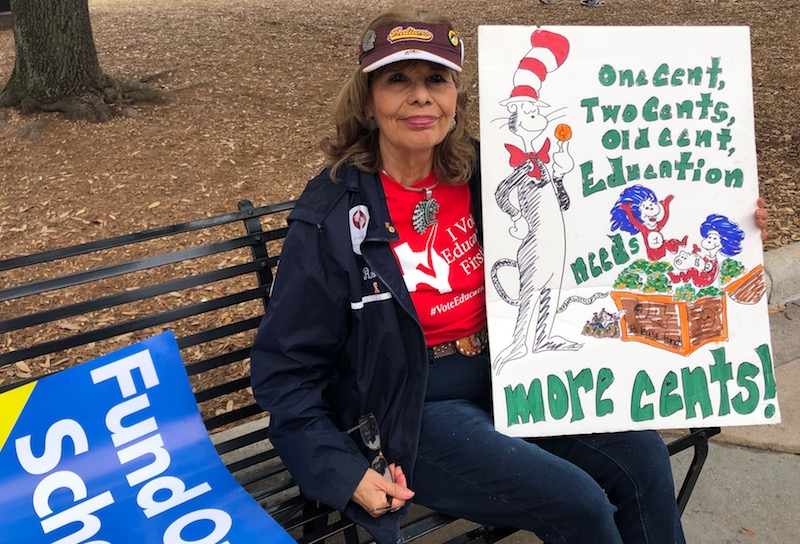 Louis Malfaro, president of the state’s largest teachers union, the Texas American Federation of Teachers, set the tone for the day at a pre-rally press conference. “It’s not our job to reconcile what the House and Senate come up with. It’s our job to hold these elected officials accountable, and not play games with each other,” Malfaro said.

Teachers across Texas trekked to Austin to, among other things, stand in solidarity with support staff colleagues who have been left out of Senate Bill 3, passed unanimously in that chamber last week, which grants a $5,000 across-the-board permanent pay raise for teachers and librarians. Guadalupe Murillo, a retired teacher of 37 years, drove up from Brownsville with 50 friends to call for pay raises for teachers’ assistants, custodians, bus drivers, and other staffers. “It takes more than just a teacher to make a student successful,” Murillo told the Chronicle as the rally transitioned to lobbying under the dome. “The people who help teachers succeed deserve a raise, too.”

House Bill 3, whose first public hearing is happening today (Tuesday, Mar. 11), would raise base pay for teachers, nurses, counselors, and other school staff and also empower districts to design merit-pay programs to reward high-performing teachers. Ruth Falcon from San Antonio, carrying a homemade sign demanding “more cents” for public education, supports HB 3’s increase in funding for the English-language learner students she works with – “Our ELL kids deserve the same amount of support as every other kid.”

Though a long way from the end of session, HB 3 – dubbed “The Texas Plan” by its backers, including House Speaker Dennis Bonnen and Public Education chair Dan Huberty – seems to be gathering support among teacher groups. Education Austin president Ken Zarifis was at the rally on Monday (Austin teachers, still stuck in the classroom, will hold their own rally on Monday, Mar. 18 when spring break begins). We like the bones of the bill,” he said, citing HB 3’s funding for full-day pre-K and approach to teacher pay. “But it’s still early, so we’ll see what the bill becomes from here.”