SXSW, Tribune, CNN Present the Rest of the 2020 Presidential Pack

Six candidates in search of the voters, plus a Trump surrogate 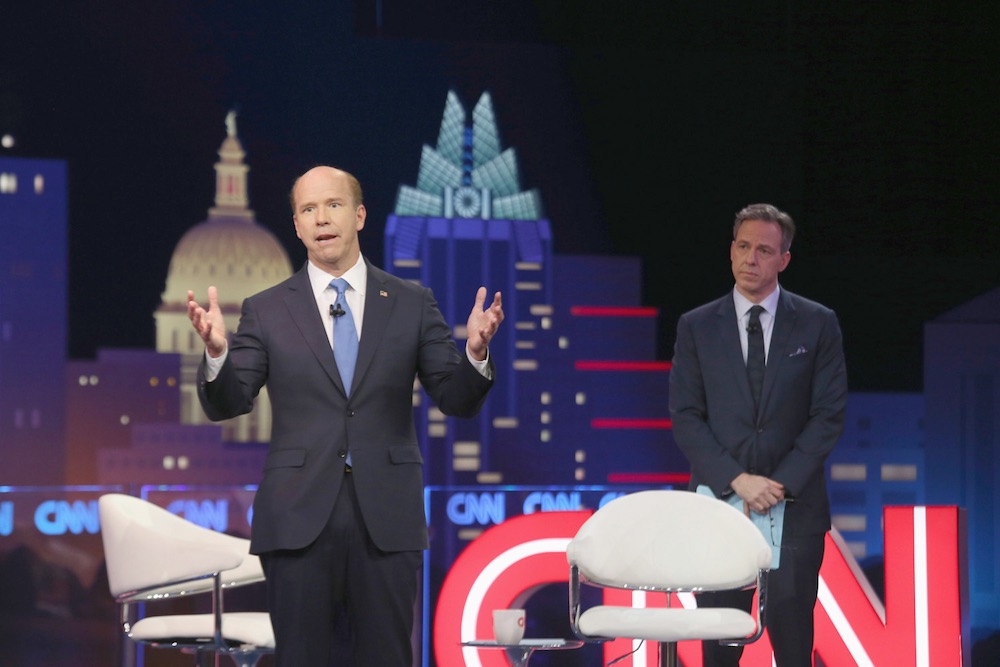 From down in the valley of the margin of error, came the 2020 zero-to-1%-ers on Sunday. At the “Conversations on America’s Future” collab between SXSW and The Texas Tribune, and then CNN’s live triple-header town hall, the folks in the back of the Democratic presidential pack allowed Austin and America to ask as one: “Who?” and “Why?”

On the whole, the candidates laid out their cases for running pretty well, be they more issue-focused (Jay Inslee, the climate-change candidate) or more biographical (Julian Castro, who us townies know) or more ideological (John Hickenlooper, running toward the Biden-congested middle lane). Closing off the “Conversations” was U.S. House Minority – sorry, Republican – Leader Kevin McCarthy, pitched by Tribune CEO Evan Smith as a surrogate for the incumbent, although the proceedings were as unlike a Trump rally as these things get.

The Trib/SXSW collab wasn’t televised, but the interviews took place amid concurrent Sunday show hits, so everyone on stage was nicely polished, unlike the worse-for-wear crowd. Inslee, who got the unenviable first slot, is a handsome old-school politician who, you can tell, knows he won't be president or single-handedly save the planet. But Inslee has nothing to lose by running now – his term . as Washington governor ends in 2020 – and wants to push climate to the top of the Democratic agenda, because “the world is on fire.” While also killing the filibuster (a hot topic this weekend): “We’re not going to get anywhere as long as Mitch McConnell has the keys to the car.”

Hickenlooper, who just left the Colorado governor’s mansion, is like Inslee a straight white man, in a cycle with a likely quota on those. Politically his pitch is more like Amy Klobuchar’s, and he’s frankly better at it. Having, in just his first week of declared candidacy, gotten ratio’d for saying he’d just sit down with McConnell and work things out, and then targeted by Howard “Flat White” Schultz as a quisling capitalist, Hickenlooper relished his time with BuzzFeed’s Ben Smith to clean up those Twitterversies and also get rather personal.

Like Klobuchar, Hickenlooper grew up in rough circumstances, the son of a twice-widowed single mother, with both cognitive and emotional issues to show for it. (“When you lose a parent, you end up having to raise yourself” – he was 8 – “and I wasn’t that good at it.") Unlike Klobuchar, he admits he has a bad temper and says he’s worked hard to grow and be a better person. In days like these, where the daily fits and spats of Orange Julius tell us that yes, character does matter in a president, it’s not extraneous info to learn that Hickenlooper sees his hair-trigger as “something that I recognize is not helping me.”

His record as the drug-and-alcohol candidate (before becoming mayor of Denver he was a brewpub owner) gives him credibility on marijuana, fast becoming a core Democratic issue, but his pro-energy stances (before becoming a brewpub owner, “Frackenlooper” was a petroleum geologist) leave him at an angle to the party on climate, as defined by Inslee. “You need both the details and the vision, and people who know how to get it done,” he said, pointing to Colorado’s regulation of methane emissions and Denver's embrace of (expensive) transit.

“Outside of what we’ve done, there aren’t that many good examples of people doing things” to directly impact climate, Hickenlooper continued, “so we can speak from authority.” Of his critics on the left, he snorted, “They’re mad that I did stuff. So sue me.” (This ornery pragmatism is also why he skipped a Senate race in Colorado he could almost certainly win: “I just don’t think I’d be very good at it.”)

In between the two Western governors was Texas’ own Castro, whose early entry into the race has been overshadowed by Betomania. But the ex-San Antonio mayor and U.S. housing secretary clearly thinks he should have an edge over the El Pasoan. (Nor does he want O’Rourke to run for Senate, preferring his twin brother Joaquin for the slot.) “I’ve been effective as an executive, but also have a compelling inclusive vision for the future,” he told Huffington Post’s Lydia Polgreen. “It’s more than enough.”

Castro, like Hickenlooper, leaned hard on the getting-things-done side of his bio, allowing his boy-made-good origin story to speak for itself. He definitely has deep and considered opinions, if not unique ones, on immigration and the power of the Latino vote. Indeed, as one might expect from an Obama cabinet member, Castro is the best heir and exponent of Obamaism in the race, which, pending the entry of Joe Biden into the race (and, perhaps, after an early Biden collapse), is a pretty open lane.

Polgreen did grill Castro on housing policy, which allowed him to accurately, if evasively, disclaim responsibility for the stupid things Obama’s team did post-bust and take credit for cleaning some of those messes up. This got him crosswise later in the day with the Bernie Sanders camp, who blasted the Obama HUD record for allowing the destruction of black wealth in America after Castro (on his Sunday-show hit before taking the stage) dinged Bernie for not being willing to sign on to reparations.

“I do think we tried to address the criticism” of HUD’s distressed asset program, he told Polgreen. “I certainly hope there isn’t a ‘next time,’ but we should learn those lessons [and] orient these programs to keep people in homes.” He also endorsed capping the mortgage-interest deduction and using the resulting revenue to invest in extremely low-income rental housing, which was music to the ears of at least some of the Austin activists in attendance.

McCarthy was careful to make no news and use a calmer voice than his party has since losing the House, adroitly dodging the bait dangled repeatedly by POLITICO’s Jake Sherman and Anna Palmer. “I want to highlight the ways where [Trump] has excelled,” he said, as if praising an imperfectly trained dog. “Based on what he said he was going to do, I’d give him an A. If he upsets you on Twitter, he probably did so prior to becoming president.”

The Bakersfield native is quite confident of retaking the House in 2020, given the number of Dem-held Trump seats, but also clear-eyed about the GOP in a numbers-don’t-lie way. “We got crushed on health care and with women, and we now have lots of room for improvement. We learn from our mistakes. And it’s healthy to get into the minority sometimes. It helps answer what we want the party to look like in the next century.”

The CNN portion of the evening (if you’ve never been to one of these things, rest assured they’re highly managed and scripted) allowed former Maryland congressman John Delaney – who’s been running for a year and a half – and current Hawaii congresswoman Tulsi Gabbard to take a spin on the ACL stage. Delaney would have been a compelling candidate in 2004, maybe, or 1996, but his earnest generic white liberalism (hope you didn’t have “bipartisan” in the drinking game) ain’t going nowhere fast this time.

Gabbard appears to be trying to get past her controversial weirdness (she’s a Hindu nationalist! She’s anti-gay! She loves Syrian president Bashar al-Assad! She’s in a cult!) by being a soldier first – she’s spent 15 years in the Army National Guard. The gambit didn’t work – she got slammed in real time during the town hall for refusing to call Assad a war criminal, and then fact-checked over her “correcting the record” that she never supported conversion therapy. Her general air of shiftiness did lift somewhat, though, as she discussed sexual assault in the military and climate change, two issues where she has at least some credibility.

The complete opposite of Gabbard came with the return of Mayor Pete Buttigieg – charming, earnest, sincere, also a veteran, also a millennial – to the ACL stage, this time with Jake Tapper. With his husband Chasten and our own mayor in the front row, the young man from South Bend wowed the crowd (a huge, Elizabeth Warren-level handshake scrum followed the town hall) and apparently the folks at home, who enjoyed his swings at VP (and his very moral former governor) Mike Pence for becoming “the cheerleader to the porn-star presidency.”