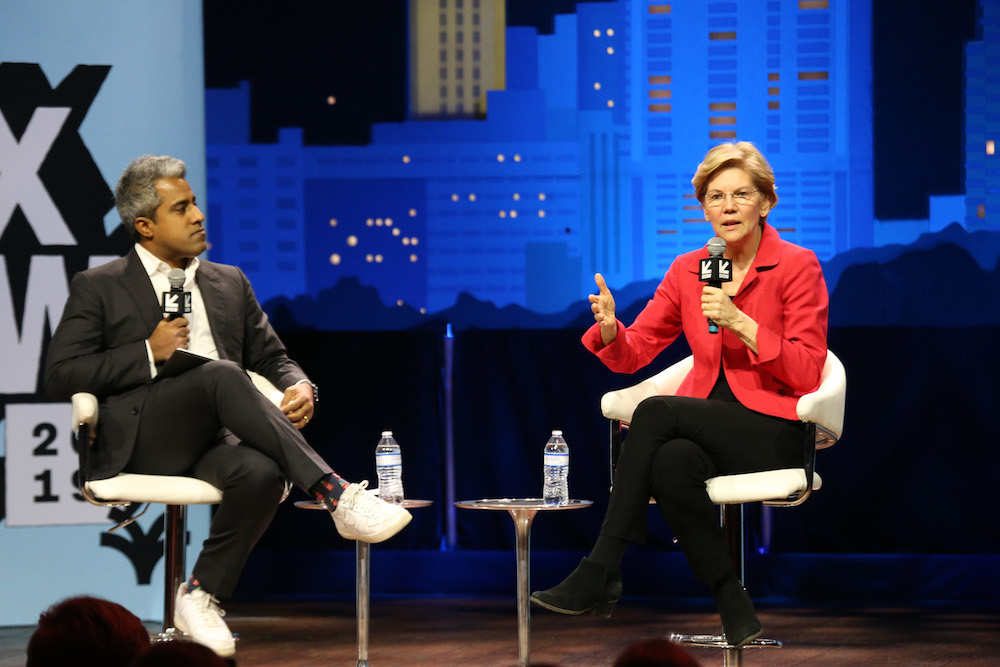 Fresh off her call to break up Facebook, Amazon, Google, and Apple, “like a gangster,” Elizabeth Warren packed the lion’s den at ACL Live, as interviewer Anand Giridharadas urged the employees of those companies to stand up so she could see them. “And then the drone will come and take your pictures,” Warren quipped. (She’s actually quite funny.)

Despite the theoretical tension, the crowd at the “Conversations on America’s Future” weekend collab between SXSW and The Texas Tribune loved most everything about Warren’s whip-smart, quick-witted performance and the by-now-well-known economic populism-but-not-socialism that defines her brand. “My view on this is that it’s like baseball. You can be an umpire, or own a team, but not both,” she said of her approach to tech trust-busting.

“So you can work for the platform, or for one of the teams, and you’ll then compete with everyone else on the platform, and it’ll be a lot more fun to work there.” While much snorting and eye-rolling has accompanied Warren’s nascent tech industrial policy – which would, to use a cogent local example, prevent Amazon from integrating its marketplace with Whole Foods – the senator may have indeed well-read the room by positioning herself as a friend of entrepreneurs and startup funders looking down the barrel of the FAANGs' big-data-driven guns.

Beyond the second-day story of Warren’s salvo against the tech titans, the former Austinite recounted the beginnings of her career as an academic expert on bankruptcy as a baby UT professor, tying in the narrative of reforming a rigged system that’s animating her candidacy. (She politely declined to expound on how Warrenism is better than centrism or democratic socialism, and directly declined to discuss Bernie Sanders.)

Warren was more hesitant and pensive when steered by Giridharadas toward more personal, intersectional identity issues – her own ethnicity (“What have you learned about being white?” prompting a credible précis from Warren of DC-tribal relations) and the culture clash with her older brothers, who all joined the military and stayed in Oklahoma and vote as such. “It doesn’t matter to me what my brother and I don’t agree on,” Warren said. “If I talk to him about our grandchildren, he’s ready to come in. And when we stand on economic issues, most Americans are really progressive.”

Warren's Saturday speaking slot was flanked by many flavors of Heartland hotdish, as Sen. Amy Klobuchar, former Ohio Gov. John Kasich, and South Bend (Ind.) Mayor Pete Buttigieg all Midwesterned out all over the stage. The last of these, with husband Chasten in tow, is making his millennial way around SXSW all weekend, including a CNN town hall (also at ACL Live) Sunday night.

Mayor Pete's charming book-tour convo with Ana Marie Cox didn’t make a big case for his 2020 prospects, but Cox did treat Buttigieg as more than a longshot oddity and mixed it up with him over whether it's time for Dems to give up on the white working class. “A bunch of people in my county must have voted, mathematically, for Barack Obama, Mike Pence [for governor], Donald Trump, and me,” he said. (He does not, unlike Joe Biden, think Pence is a decent guy, and he should know.) “[Democrats] can't walk away from equality issues for a second, but I refuse to accept” that his industrial Midwestern neighbors are lost to the party. (To which Cox replied, “You'll do very well on national television. People want to hear that." She was not convinced.)

Klobuchar, who’s had a really bumpy ride in her first weeks of 2020-hood, struggled to find the right tone in her exchange with Re/Code’s Kara Swisher, who went right in on the Minnesota senator's reported harsh temper and treatment of staffers, which Klobuchar wants to be a less important part of her storyline than it deserves to be. From that rough start, she tried way too hard to pander to Austin (as opposed to the actual SXSW crowd in front of her), cringingly declared she would be funny (more than once) without actually being funny, and stumbled through a tech-and-pharma antitrust agenda that sounded righteously aggressive but couldn’t help but show poorly against Warren’s.

Kasich, who ran against Trump in 2016 and is possibly thinking of doing so again, knows he comes off as self-righteous and tried to mitigate it in his convo with David Maraniss, but was still kinda annoying in his “blunt” “tell it like it is” realism and anti-liberalism (the core #NeverTrump ideology) mixed with teeth-grinding mawkishness. He does believe in climate change, though. (Former Massachusetts governor and 2016 Libertarian VP nominee Bill Weld, who actually has declared in the GOP primary against Orange Julius, got the desolate end-of-day slot, up against Alexandria Ocasio-Cortez.)